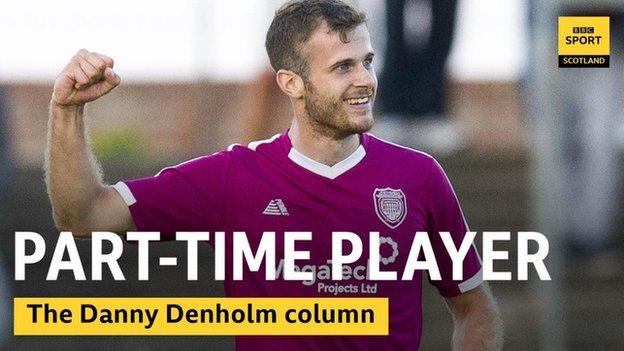 Danny Denholm plays for Arbroath, who are currently romping clear in Scotland's League One. The 28-year-old winger combines playing part-time with his job as a PE teacher in Dunfermline, but was previously a full-time footballer with Livingston. Since then, he has since dropped down the divisions with Forfar Athletic and now Arbroath, both under the management of the inimitable Dick Campbell. Here, he tells us what life is like for a part-time player during the festive season.

Christmases used to be about sitting back, wearing my freshly knitted onesie from my Nan with a box of Quality Street while I watched the festive football. Then I signed my first contract.

Instead, in the last seven or eight years I've over-indulged precious little during this time of year. Granted, given I'm playing at part-time level with Arbroath, the demands are not quite the same as on those at the top of the game, but the schedule does mean you are usually training Christmas Eve, Boxing Day and Hogmanay. No extra helpings of turkey, roast potatoes and stuffing - maybe washed down with the odd alcoholic beverage - for me.

This year I was able to have an extra couple of pigs in blankets given we played last Saturday and don't play again until Saturday coming. We trained on Christmas Eve and will again later today, then on 27 December, Hogmanay, and then back to our usual routine.

There is still a tradition that does allow us to let our hair down a bit and that is the Christmas night out. This is more often than not a two-day affair which starts as soon as the referee blows for full time on your Saturday game. These trips can range from London, Manchester or even Dublin (Arbroath's choice this year).

The idea is to facilitate team bonding but in some cases it can facilitate fully grown men behaving like teenagers. In theory, managers are usually happy when these Christmas parties take place on foreign soil as there is little chance of any immature behaviour being reported back to the club - not easy when there are seven different SPFL teams sharing the luxury Ryanair travel.

Ross County, East Fife, Stenhousemuir, and East Kilbride were all on our flight, and Livingston and Raith Rovers were both over in Dublin as well - and I can report that East Kilbride had a head start on the rest of us in the drinking stakes. There's a wee bit of mingling goes on in the departure lounge but it's no more than small talk. It's a cardinal sin on these weekends to talk football - the phrase "put the ball away" will be aimed your way if you attempt it.

Sunday is fancy dress or Christmas jumper day. We kept it simple with just the jumpers but I bumped into Livingston midfielder Keaghan Jacobs, who was dressed as an alpine skier. Fair play to him.

Mind you, that might be down to the manager being Lower League cult hero Dick Campbell, rather than the integrity of my team-mates. If you were to deliberately get yourself removed from his selection options, there is a strong possibility that he will have you doing laps of his garden on Christmas day while he stares on with a plateful of Brussels sprouts.