Fulham are bottom at Christmas after a dull draw at Newcastle, and Huddersfield lost to Southampton.

David Brooks scored twice as Bournemouth beat Brighton. Liverpool saw off Wolves on Friday to extend their lead at the top to four points. 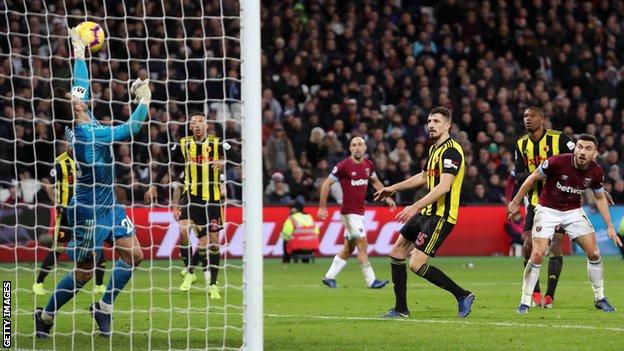 I've seen Ben Foster have some inspired performances over the years, but the Watford keeper was in absolutely sparkling form against West Ham.

Saves from Robert Snodgrass and Michail Antonio were outstanding, and just when you thought Foster was beaten he kept pulling out something special for his team. Christian Kabasele and Troy Deeney also played their part, but make no mistake - Watford's clean sheet was down to Foster.

Did you know? Foster made seven saves, his joint-highest tally in a Premier League game this season. He last made more in a top-flight game in January 2017 for West Brom against Spurs (eight). 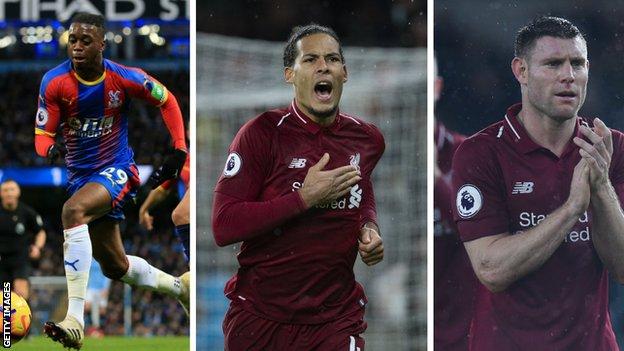 Aaron Wan-Bissaka: The last time Crystal Palace won at Manchester City, Aaron Wan-Bissaka wasn't even born. This full-back is the real deal and I said so when I saw him play against Fulham at Craven Cottage at the start of the season.

The 21-year-old was superb against City, and handled Leroy Sane brilliantly. Admittedly he did get by with a little help from his friends.

Did you know? Wan-Bissaka made seven tackles in Palace's win. Only once before has he made more in a single Premier League game (eight v West Brom in May 2018).

Virgil van Dijk: I knew Virgil van Dijk could play - I was saying as much in this column before he even joined Liverpool, and I have been singing his praises ever since.

However, when I saw the defender match Wolves' lightning-quick Adama Traore for pace, my jaw dropped. He then went on to complete the most sensational performance with the coolest and most technically proficient side-foot finish you will ever see. One player shouldn't have all that talent.

Did you know? Van Dijk has kept as many clean sheets in his 32 Premier League games for Liverpool (17) as the Reds have conceded goals with him on the pitch.

James Milner: I felt sorry for Nathaniel Clyne. When a manager has a player like James Milner, who can play in a variety of positions, everyone else in the team has to be on the top of their game.

Milner came in for Clyne against Wolves and was as dependable and as solid as you would expect from one of the most experienced players in the country. He is still in my top three contenders for Footballer of the Year.

Did you know? Playing at right-back, Milner had more touches (128) than any other player in the Premier League this weekend. 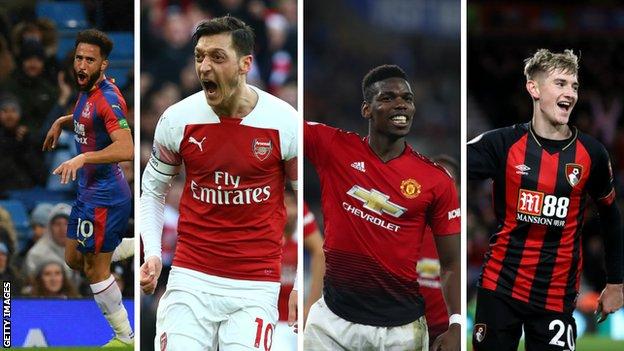 Andros Townsend: You can't score a goal like that and not be in my team of the week. The strike by Andros Townsend at Manchester City was just incredible. Quite apart from scoring a spectacular goal, he devoted much of his time to helping Wan-Bissaka quell the spectre of Leroy Sane. A fabulous all-round performance by the England international.

Did you know? Townsend has scored 17 Premier League goals - with 10 of those from outside the box.

Mesut Ozil: All these media soothsayers who insist Ozil might be surplus to Unai Emery's requirements must be mad. Why would Emery allow his only world-class midfield player to leave the club?

No, Emery is much smarter than that. The manager may want a little more sweat from the former Germany international but as long as he keeps producing defence-splitting passes amid the rest of their midfield hectic mediocrity, Ozil is a must for Arsenal.

Did you know? Ozil completed all 34 of his passes in the opponents' half during Arsenal's win over Burnley - his best 100% ratio in a Premier League game.

Paul Pogba: This is the Manchester United we know and love. I said last week in the Crooks of the Matter that my issues with former United boss Jose Mourinho were not personal, but it is now very clear that Mourinho's issues with Paul Pogba were.

I can't remember a team that looked so relieved by the departure of a manager, or supporters more jubilant. Pogba's presence appeared to be the inspiration for United's victory over Cardiff. As for United fans... they've got their 'football' club back.

David Brooks: What a season this lad is having. He's come a long way since his days at Sheffield United via a spell on loan at Halifax, and he certainly put Brighton to the sword.

He has also acclimatised particularly well to life in the Premier League under the superb tutelage of Eddie Howe and has taken a sudden liking to scoring goals. A useful habit and one that can become quite addictive after a while.

Did you know? Brooks has netted five goals in his past 11 league appearances, after managing just three in his previous 35. 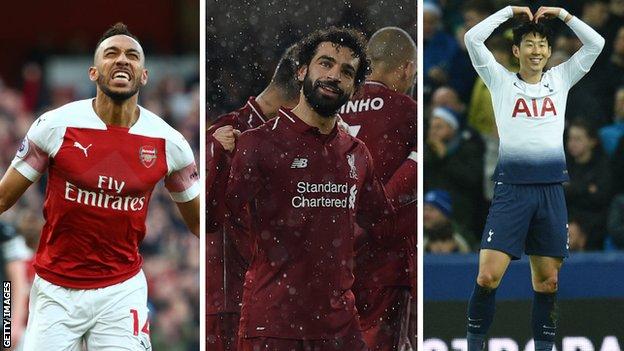 Aubameyang absolutely smashed the living daylights out of the ball and left Hart clutching at fresh air. As for Burnley, they might find themselves in the bottom three but they will be all right.

Did you know? Aubameyang has been directly involved in 19 goals in his 17 Premier League home games (14 goals, five assists).

Mohamed Salah: This was a blistering performance by Mo Salah against Wolves, especially in the first half. Salah's movement off the ball was like watching Lionel Messi. He was everywhere. There was a moment when the Liverpool forward was even defending in his team's back four.

However, it was his goal that made me sit up and applaud this Egyptian national treasure. It was Salah who took the free-kick, followed the ball into the box and watched his team-mates work the ball around the penalty area. All the time, Salah never took his eyes off the ball until it left his boot into the back of the net. Genius.

Did you know? Since the start of last season, Salah has found the net against 20 of the 22 teams he has faced in the Premier League, failing only against Manchester United and Swansea City.

Son Heung-min: Tottenham produced a masterclass at Everton that we are all very aware they are capable of doing. The problem is that while Everton got a terrible beating, this victory will not mean a row of beans unless they can back it up with others over the festive period.

Son is the man of the moment for Spurs. The South Korean bagged two and, along with Christian Eriksen, seemed involved in everything in a merciless 6-2 romp. It doesn't get better than this. Read what I have to say about Spurs manager Mauricio Pochettino and his links with Manchester United in the Crooks of the Matter below.

It would appear Ed Woodward, the executive vice-chairman of Manchester United and the man responsible for sacking Jose Mourinho, must have read The Crooks of the Matter last week and acted immediately.

It would not be the first time I have predicted something like this but there was an element of inevitability about Mourinho's departure, I must admit. So what now? Ole Gunnar Solskjaer is not the answer and that's why they've put 'interim' before his name. The question is who?

I am under no illusion, and mentioned before, that getting Zinedine Zidane would put United back in the game metaphorically speaking. They would at least have someone of Pep Guardiola's standing at the helm and that cannot be underestimated.

Spurs fans would be incandescent with rage should Mauricio Pochettino become the latest manager to find residency at the Lowry Hotel. Yet the rumours of interest by United in the Argentine have been too intense to be total fantasy.

I wouldn't rule out Nuno Espirito Santo. The Wolverhampton Wanderers manager is the most exciting coach I have seen since Marco Silva burst onto the scene. What is crucial is that United get their next managerial appointment right, or it could be curtains for Mr Woodward.