It is jump racing's Christmas special; the festive blockbuster which brings together a glittering cast list to dominate the busy schedule on 26 December.

In the tradition of major seasonal dramas, a King George VI Chase repeat is a possibility - and there are always questions to be answered.

There's no doubting the brilliance of Might Bite - his record of 10 wins speaks for itself - but life with the horse, owned by members of the Knot Again Partnership of friends, has never been dull either.

When he nearly threw away Cheltenham's RSA Chase in 2017 by swerving alarmingly across the course, it was not the first time such antics had occurred, and no-one has ever come up with a reason, bar perhaps a tendency for youthful immaturity.

And the flop by Nico de Boinville's mount behind a string of his King George rivals in the Betfair Chase at Haydock in November, having never looked entirely happy, was the cue for further furious head-scratching.

Trainer Nicky Henderson is upbeat, however, reporting Might Bite looks "absolutely staggering" now, and he believes we'll see a lot better on this occasion.

Previously at Kempton: Winner of the King George and one other race, plus once a faller.

They say: "I've never done any good in that Betfair Chase. Long Run and Bobs Worth were both beaten in it. I think we just have to put a line through Haydock; there are no other excuses, forget it" - Nicky Henderson

One other thing: Was on course for a brilliant win in the 2016 Kauto Star Novices' Chase (two races before the King George and over the same three-mile distance) when falling at the last.

Will Bristol De Mai stay on trail of £1m bonus?

Just like in 2017, Bristol De Mai comes to Kempton on something of a high after success in the Betfair Chase, the first leg of the Jockey Club's £1m 'Steeplechasing Triple Crown', which also takes in the King George and the Cheltenham Gold Cup.

Conventional wisdom is the feature at Haydock is 'his race', and that he is more vulnerable at other tracks. That is what happened last time around when Simon Munir and Isaac Souede's grey gelding, ridden by their retained jockey Daryl Jacob, was only sixth behind Might Bite at Kempton.

However, while trainer Nigel Twiston-Davies has never knowingly undersold himself on the confidence front, there is a definite belief routine surgery to aid Bristol De Mai's breathing may have made all the difference this season.

He could hardly have been more impressive in what was a 'mini Gold Cup' at Haydock, when for once the going was not rain-soaked and he positively danced on the good ground.

Form: Arrives after sure-footed, repeat win in Betfair Chase, Haydock, seeing off many of his King George rivals.

Previously at Kempton: Behind Might Bite, in 2017 King George, on only previous visit

They say: "He was going well when making a bad mistake [at the 10th fence] last year and that was that. He had a few niggles in the past, but this season has been much smoother, and I'm happy we'll get a better run this time" - Nigel Twiston-Davies

One other thing: There's been some debate on the pronunciation front - it should be Bristol-De-May not My.

Are stablemates Native River and Thistlecrack primed for more glory?

Kempton has been kind to Colin Tizzard over the years, and has played a significant part in turning the south-west of England dairy farmer into one of the most formidable players in British jump racing.

The Tizzard team guided Cue Card, one of the few horses to get vaguely near the level of public affection enjoyed by the four-time King George winner Desert Orchid, to success in the big race in 2015; he was then runner-up to the stable's Thistlecrack a year later.

Joe Lively and Royal Vacation also brought the trophies for the Grade One Kauto Star Novices' Chase back to Milborne Port.

Now Thistlecrack returns, looking for a repeat win and seeking to improve on his fourth place of 2017; again jockey Tom Scudamore rides in the orange-and-black silks of owners John and Heather Snook.

With injury problems now behind him he was the 'eye-catcher' - considering his long absence - when third behind Bristol De Mai at Haydock.

The Brocade Racing-owned Native River, the Cheltenham Gold Cup winner, ran a fine race in second at Haydock, but the three-mile distance on the flat Kempton track looks unlikely to suit his reserves of stamina. Richard Johnson rides.

Form: No win in only four races since the 2016 King George, but injury-plagued; encouraging third at Haydock in November.

Previously at Kempton: Beat the great Cue Card in the King George; behind Might Bite in 2017.

They say: "Haydock showed me the engine is still there, the fire's still in his belly, and with the improvement you'd hope you could get at Kempton, you can't rule him out" - Tom Scudamore

One other thing: In 2016, he was the first novice chaser to win the King George in only his fourth race over fences. 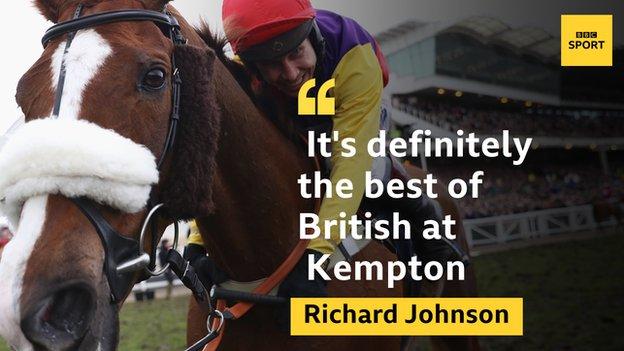 Form: Cheltenham Gold Cup winner - beating Might Bite by four and a half lengths - and runner-up to Bristol De Mai at Haydock, going down by four lengths.

Previously at Kempton: Third behind Tea For Two in 2015 Kauto Star Novices Chase.

They say: "You've got all the right contenders there, definitely the best of the British; it's hard to choose between the top five or six but I definitely wouldn't swap Native River and I hope it'll be a stepping stone to [the] Cheltenham [Gold Cup]" - Richard Johnson

One other thing: Three-time champion jump jockey Johnson, on course for a fourth title, looks for a first King George success.

Will Politologue give Nicholls a 10th win?

Horses for courses: Politologue is, like Bristol De Mai a grey horse, but unlike BDM his record at the Sunbury-on-Thames track - two runs, two wins - is exemplary.

Though Politologue's stamina is unproven over three miles, Paul Nicholls believes it should last out OK, and his liking for the track plus his preference for racing right-handed both put him in good stead for the challenge ahead.

Booked to ride the John Hales-owned runner is Sam Twiston-Davies - Nicholls' former number one jockey, who's now thriving as a freelance, regularly riding for his father Nigel, after splitting with the stable in the summer.

New principal rider Harry Cobden will don the silks of owners Paul and Marianne Barber, Ged Mason and Sir Alex Ferguson to take the mount on the stable's less-fancied hope Clan Des Obeaux (16-1), though he certainly has credentials having been fourth in Bristol De Mai's race at Haydock. 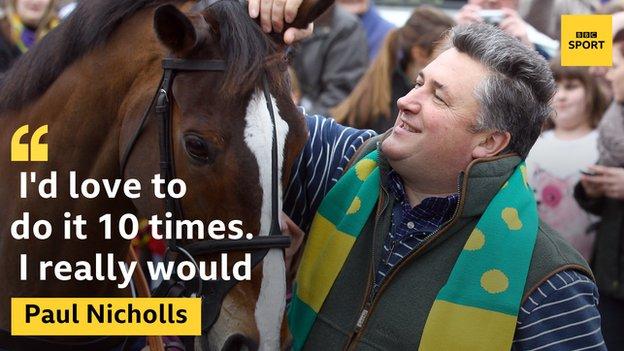 Form: Narrow winner of past two races (over shorter than three miles) beating Min (Aintree, April) and Charbel (Ascot, November); both horses have won since.

Previously at Kempton: Unbeaten in two races including the 2017 Desert Orchid Chase.

They say: "I'd love to do it 10 times, I really would; in a way it's irrelevant, just a number, but to win it 10 times would be awesome. I'm very happy with both horses, and can't wait" - Paul Nicholls

A poignant win for Waiting Patiently?

The unknown quantity in the field is Waiting Patiently, trained for owner Richard Collins by the late Malcolm Jefferson until his death in February, and now under the care of Jefferson's daughter Ruth at the family's Yorkshire HQ.

The seven-year-old, again being ridden by jockey Brian Hughes, is unbeaten since joining the Jeffersons, though he's not run since defeating Cue Card with a command performance at Ascot in February.

Ruth Jefferson, who's faced challenging times since taking over when losing some horses and staff, will herself drive the horse on the 240-mile journey south to Kempton on Christmas Day.

She's convinced it's time for him to take on the best, and although it'll be a first try at the three-mile distance, the gut feeling is he'll cope with that and make a bold bid to become the first King George winner trained on jumping's 'Northern' circuit since One Man in 1996.

Form: Six out of six over fences; unraced since defeating Cue Card at Ascot in February 2018; beat Politologue at Haydock in January 2017.

Previously at Kempton: One run, one easy success.

They say: "We've thought the race would suit for a while, and we'd like to have a go and learn more about him. Ideally we're looking for ground on the slow [soft] side of good, he just doesn't like it too quick" - Ruth Jefferson

One other thing: Was given his name after being happy to wait his turn for feed when a young horse.

These questions and many more will be answered in jump racing's Grade One, mid-season chasing championship staged over a fast and furious three miles and 18 fences at Kempton.