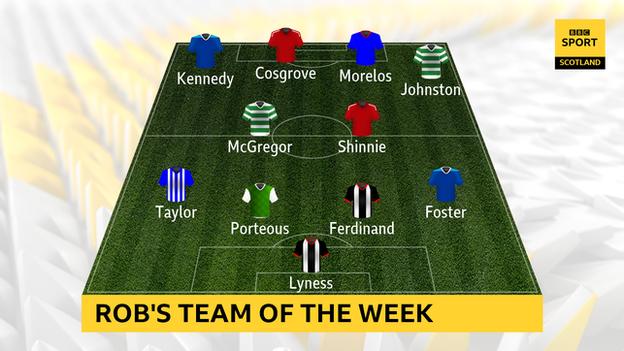 As Christmas rolls around for another year, the weekend's Scottish Premiership delivered a host of festive delights across all six matches.

Here, BBC Sport Scotland's Rob Maclean talks us through his team of the week.

The St Mirren shot stopper made sure that one goal against Motherwell at Fir Park was enough to claim three precious Premiership points. He made important saves to deny Curtis Main and David Turnbull, particularly from the latter at the death, to give the Paisley team the solid base they needed to get the win they so badly wanted.

A full-back is never too distraught when the winger he's up against is hooked at half-time. Rangers' Eros Grezda had no joy against St Johnstone's Richard Foster, who is the most experienced element in an impressive backline that has been the basis of the Perth team's recent eight-game unbeaten run. Even in defeat on Sunday, Foster deserves plaudits.

St Mirren will hope they can keep former West Ham United, Sunderland and Queens Park Rangers defender Anton Ferdinand a bit longer. He's clearly a big influence on the younger players around him and the Paisley team will surely make it a major priority to try to extend Ferdinand's short-term deal beyond January. Against Motherwell, he was a rock.

Teenage Hibs defender Ryan Porteous keeps his place in my team after stooping to head in the equaliser against Livingston on Saturday. He's far from the finished article and sometimes plays with his heart rather than his head, but he displays plenty of passion and promise. That'll do for me.

Scotland Under-21 left-back Greg Taylor is so consistently impressive for Kilmarnock that his performances can be taken for granted. He combined with Jordan Jones - a great partnership - to set up Eamonn Brophy for the opening goal and generally delivered a quality contribution.

Skipper Graeme Shinnie was the driving force behind Aberdeen's fourth win on the bounce, which has taken them to within three points of Premiership leaders Celtic. For fairly obvious reasons, the Dons are trying to get Shinnie locked in to a new extended contact.

I've been getting withdrawal symptoms from leaving Callum McGregor out of my team last weekend. He was becoming 'cut and paste' material. The Celtic midfielder is back where he belongs after dictating the play in Saturday's 3-0 defeat of Dundee, which could easily have turned into a much more serious scoreline.

Brendan Rodgers chose to replace the injured Odsonne Edouard as main Celtic striker on Saturday with 19-year-old winger Mikey Johnston. The youngster's response was to score two of the three goals that beat Dundee after finding the net against Motherwell in midweek and give his gaffer another attacking option.

After three weeks without a goal, Alfredo Morelos made St Johnstone suffer with a second-half double that took Rangers to within a point of league leaders Celtic. That's 19 goals before Christmas, with a few suspensions thrown in. If he can maintain that strike rate, Rangers can keep up their title challenge.

As recently as a couple of weeks ago, Aberdeen fans were far from convinced about striker Sam Cosgrove. Six goals in four games have made a big difference and, while the former Wigan Athletic trainee needs to deliver on a longer-term basis to prove he's a striking solution to their scoring problems, there are now reasons to believe that Cosgrove could be the answer. Getting both strikes in the 2-0 win over Hearts earns him a place in my team.

Deployed as a solo striker for St Johnstone against Rangers on Sunday, Matty Kennedy carried out the instructions of his manager, Tommy Wright, to the letter. He held the ball up well, had serious nuisance value in the middle of the Rangers defence and scored brilliantly on the stroke of half-time.