Liverpool hold a six-point lead at the top of the Premier League after putting four past Newcastle at Anfield, while Tottenham scored five against Bournemouth at Wembley to move up to second.

Manchester United made it two wins out of two under caretaker manager Ole Gunnar Solskjaer with a 3-1 victory over Huddersfield and Everton bounced back from their thrashing against Tottenham on Sunday with a 5-1 win at Burnley, with the games involving Fulham and Wolves and Crystal Palace and Cardiff both ending in draws.

The only match played on Thursday saw West Ham come from behind to win 2-1 at Southampton. 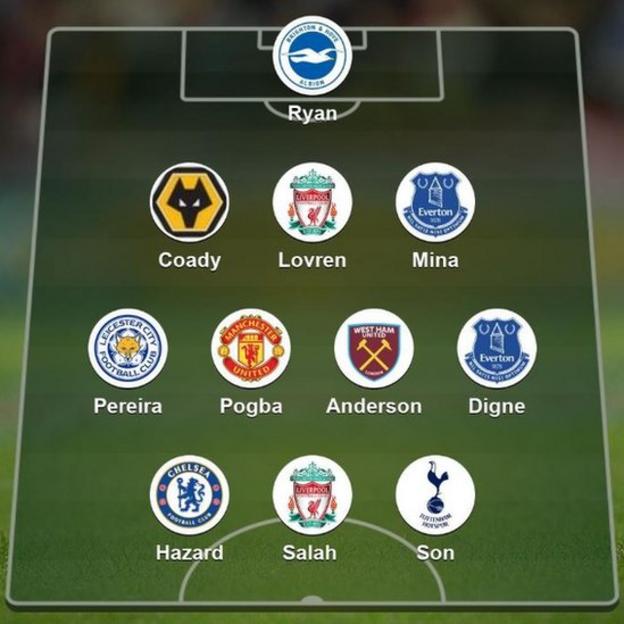 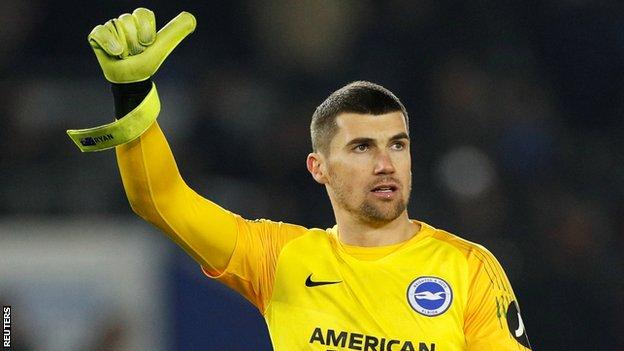 When Pierre-Emerick Aubameyang is firing on all cylinders you need your goalkeeper to be in top form. Fortunately for the Seagulls, Ryan was in great shape. Aubameyang could have scored a hat-trick but the Brighton keeper made three world-class saves from the Arsenal striker and Brighton owe their point to Ryan.

Did you know? Ryan made three important saves in Brighton's 1-1 draw against Arsenal, stopping the Gunners scoring in the second half for the first time in their last 17 Premier League games. 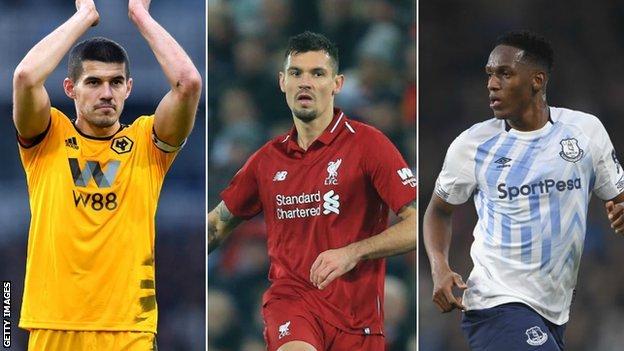 Conor Coady: Fulham's game against Wolves was one they had to win to convince anyone their time in the Premier League was anything but temporary - and they failed. One of the reasons the Cottagers struggled was the commanding performance of centre-back Coady. The Wolves captain helped them seal a well-earned point when he brilliantly cleared a certain goal off the line. Meanwhile, starting with Ryan Sessegnon on the bench was an extraordinary decision bearing in mind he is one of the few players capable of scoring goals in a Fulham team that desperately needs them.

Did you know? Coady made a match-saving block in the 90th minute for Wolves to stop Mitrovic scoring and keep it at 1-1.

Dejan Lovren: You had better take a picture of this! You won't see Dejan Lovren in my Team of the Week that often when he's got Virgil van Dijk, Andrew Robertson and Trent Alexander-Arnold in the line-up with him. But when you strike a half-volley as well as Lovren did against Newcastle, I think exceptions have to be made.

Did you know? As well as scoring the opener for Liverpool, Lovren helped the Reds keep a clean sheet, with no team-mate making more clearances (three).

Yerry Mina: Everton badly needed this win against Burnley, especially after Spurs chewed the Toffees to bits at Goodison last Sunday, and Mina started the Everton goal-rush with a powerful header past Joe Hart. The Colombia defender is making a name for himself as a bit of a bruiser in defence and by the looks of things he is pretty menacing in attack as well.

Did you know? Mina's opener (one minute 39 seconds) was the quickest Premier League goal by an Everton player since Tom Davies scored against Leicester after 30 seconds in April 2017. 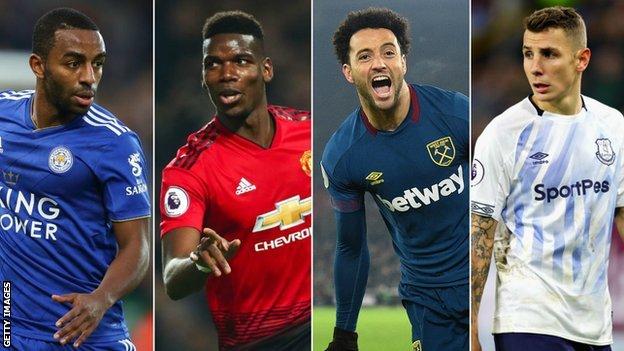 Ricardo Pereira: Well, who would have thought it? Manchester City went to Leicester in desperate need of points and came back empty-handed. Now the champions find themselves seven points behind Liverpool at the halfway stage of the season. It took a super goal from the Foxes' Pereira to do it. The Portugal international hit his shot so sweetly it screamed past City goalkeeper Ederson. I think it's 'all or nothing' now, Pep.

Did you know? Pereira scored the winner against the reigning Premier League champions, also having more touches than any other Leicester player (69).

Paul Pogba: Two well-taken goals against Huddersfield have laid down a marker. His dreadful hairstyles have also slowly disappeared as well. I really hope these are the signs of a much more mature player. With Jose Mourinho gone, Pogba is also starting to play with a freedom that was absent earlier in the season. Graeme Souness has given the best analysis of Pogba I have ever heard. Should Pogba happen to listen to the Liverpool and Scottish legend, he too could become a really great player.

Did you know? Pogba has been directly involved in four goals in two Premier League games under Solskjaer (two goals, two assists), the same total he had registered in his last 12 games under Mourinho (one goal, three assists).

Felipe Anderson: What a fabulous counter attack. West Ham absolutely ripped Southampton to shreds on the back of their own free-kick. Once the ball fell to Felipe Anderson that was it. The Brazilian is playing the most consistent football I think I've seen him play. His earlier strike put West Ham on level terms and with a little luck Anderson might have had a hat-trick. The Hammers are blowing bubbles at the moment and it is all down to Felipe Anderson. An outstanding performance.

Did you know? Felipe Anderson has scored seven times in his past nine West Ham appearances, after netting only once in his opening 12 games in all competitions for the club.

Lucas Digne: This was a very impressive response by Everton having received a terrible mauling from Spurs only a few days ago. I don't think you will see two better strikes from a wing-back all season. Digne not only has a taste for goals, but he has also adapted brilliantly to the demands of Marco Silva's new-look line-up.

Did you know? Five of the eight goals scored by Everton's Digne in Europe's big five leagues have come from outside the box, including each of his three for the Toffees. 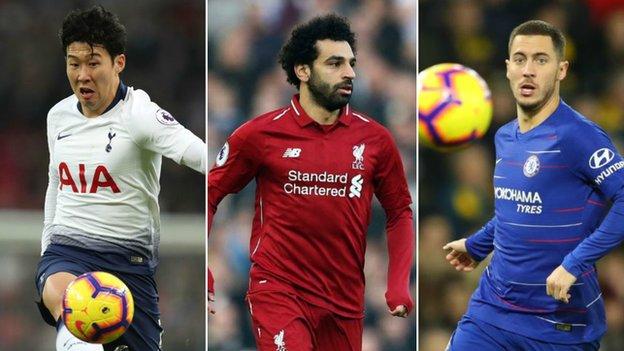 Son Heung-min: Eleven goals in two games? I must be dreaming. It was Martin Keown who said on Final Score two weeks ago that Spurs had the sort of fixtures in the next few weeks that could see them challenging for the title. I didn't believe him then but I'm beginning to change my mind now. Son is in fantastic form but now we lose him for three games because of the Asian Cup. Couldn't they host the Asian Cup in June?

Did you know? Tottenham's Son has had a hand in 10 goals in his past nine Premier League appearances (seven goals, three assists).

Mohamed Salah: This was a stroll in the park for Liverpool. Newcastle were out of their depth from the moment the game started. In fact, I doubt whether Salah's kit required washing after this game. Newcastle should also have known better than to place hands on Salah in the penalty area, especially at Anfield. Such incidents only result in spot-kicks and Salah normally obliges.

Did you know? Salah has been involved in 36 goals in 28 home Premier League games for Liverpool (25 goals, 11 assists).

Eden Hazard: This was a masterclass by Hazard against a Watford side that stood up to Chelsea. However, the Belgium international was the difference between the two teams. Hazard took both his goals as though he was playing in a training match. The coolness, not to mention the authority in Hazard's game at the moment, is quite frightening.

Did you know? Chelsea playmaker Hazard has been directly involved in 19 goals in the Premier League this season (10 goals, nine assists); the most of any player.

I have admired Carlo Ancelotti for many years and had the pleasure of interviewing him on a number of occasions during his successful period at Chelsea. He always struck me as a quiet, dignified man with a steel edge. However, what the discussions with the Italian did not expose was his moral compass.

I'm not sure how I missed it but I never thought he would be one among very few managers (Louis van Gaal and Guus Hiddink are others) in the world who have threatened to take their entire team off the pitch because of racial abuse. What men.

The game between Inter Milan versus Napoli was not Italian football's finest 90 minutes. Napoli's Kalidou Koulibaly was targeted at the San Siro, where the Senegal defender was sent off.

"The next time we'll stop playing even if we lose the match," said the former Chelsea boss. Ancelotti has a point. After all when one player is offside isn't the entire team? Likewise when a black player is suffering a torrent of racial abuse isn't the team suffering too? Ancelotti is clearly not prepared to stand for it. And so he shouldn't.