Ah, that awkward week between Christmas and New Year's Day when you're not really sure what day of the week it is, or what to do to keep yourself entertained.

Well, two things for sure on 29 December were that it was a Saturday and the EFL was back again with a full programme of fixtures that certainly didn't disappoint for headlines and history.

A seven-goal thriller with an unexpected interruption, a hot-shot striker bagging a hat-trick and a prolific marksmen moving closer to writing a new record were just some of the stories you might have missed in between polishing off your leftovers.

Neutrals in the crowd at Norwich City over the past few weeks have had more than their money's worth in terms of entertainment.

In four Championship matches in December, 22 goals have flown in at Carrow Road. But the most dramatic of those encounters was arguably saved for the last game of 2018.

Derby were the visitors to Norwich, who just three days earlier had completed a remarkable comeback against County's East Midlands rivals Nottingham Forest to draw 3-3.

This time, it was the Rams who would have the last laugh, though - but only after an unexpected delay to the concluding stages of the match.

Norwich looked on course for a 10th league win in their past 12 matches when Ben Godfrey and Teemu Pukki put them 2-0 ahead after 31 minutes.

Fikayo Tomori and Mason Mount struck twice to level things at 2-2 - but Pukki was in the goals again with nine minutes left to seemingly secure another three points for the Canaries.

A 20-minute delay followed before referee David Webb was happy for the players to return to complete the game.

And what an end it turned out to be.

First Florian Jozefzoon made it 3-3 as he poked in from a goalmouth scramble on 87 minutes and then former Ipswich Town striker Jack Marriott netted the winner in the second minute of injury time.

But, we weren't done there. Norwich's Jordan Rhodes still had time to rattle the crossbar before the final whistle eventually came after 10 additional minutes! 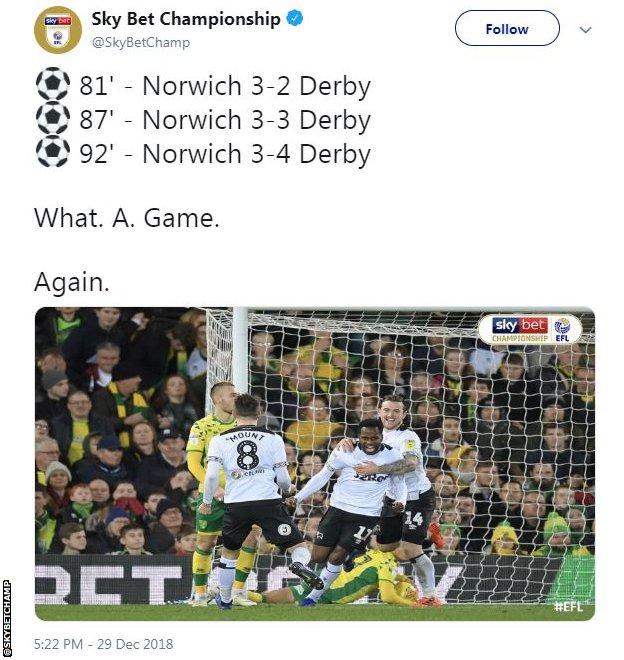 Billy Sharp has found the back of the net on a regular basis during his career.

To be precise, 219 times in league matches since he netted his first senior league goal in a League Two match against Chester, while on loan at Rushden from Sheffield United in February 2005.

On Saturday, he scored twice for the Blades in a 3-0 home win against Blackburn Rovers, taking Sharp's tally to 16 in the Championship so far this campaign.

It also meant the 32-year-old moved level with Rickie Lambert as the leading English Football League goalscorer since the turn of the century.

By comparison, Lambert took 605 appearances to reach 219, while Sharp has matched him after just 495 games.

Which defence will be breached when he bags number 220? The odds are we won't have to wait too long to find out.

Pressure mounts on Forest and Karanka

Aitor Karanka will doubtless be more than happy to see the end of 2018.

The Nottingham Forest manager endured another uncomfortable afternoon as his side were beaten 1-0 at Millwall, stretching their winless run to five matches.

Karanka had reportedly been told by the club's hierarchy to ensure Forest were occupying a play-off place by 1 January. - but the Reds will go into 2019 in 10th, six points adrift of the top six.

The Spaniard was defiant after the defeat at The Den during which Forest fans had shown their support for him by unveiling banners.

"The only thing that I know after this game and every single one, is that I'm really pleased with the players and the fans' support," the former Chelsea and Real Madrid assistant manager told BBC Radio Nottingham.

"So, I just want to keep everyone together. As when I came here, my message was the same, trying to do my best and be honest and try to put this club where it belongs.

Responding to those media reports in the past week, he added: "I've been involved with football for 25 years, so I'm not surprised by anything."

Sometimes strikers enjoy hot streaks where everything they touch seems to turn to goals.

Peterborough's Ivan Toney is such a man right now.

After just three goals in his first 19 appearances in all competitions this season, Ivan has been on fire since netting in a Checkatrade Trophy tie against Luton on 13 November,

A hat-trick on Saturday in a 4-0 rout at Accrington took his tally to 13 goals in his past 12 matches.

It was also the second time this month the 22-year-old has been able to go home with the match ball. His hat-trick against Bradford City was just one of the sub-plots of an epic FA Cup second round replay.

"It's great to get the goals, but the main thing is helping the lads get three points," a very nonchalant Toney told BBC Radio Cambridgeshire at full-time.

"You've got to put yourself about though and hopefully you get chances. I managed to do that today and put a few away.

"If you're scoring goals, you're obviously going to be enjoying football, so it's massive and I'm thrilled to see what it might bring.

"It's just the two match balls in the house at the moment, but hopefully I can add a few more soon."

Not such a goal glut in League Two though....

From goals galore to goals in slightly shorter supply.

League Two's results on Saturday might well have busted a few pools coupons as no fewer than five goalless draws came through the Vidiprinter.

Stalemates at Colchester, Mansfield, Newport, Notts County and Tranmere did little to help the respective fortunes of those clubs at both ends of the table.

Notts County though may well take some positives from their clean sheet as they end 2018 with the joint-worst defensive record in the EFL.

Both they and Scunthorpe United in League One have shipped 51 goals so far this campaign, both after 25 matches played.

For the Magpies, as the EFL's oldest club, they will hope 2019 brings an upturn in results to ensure they don't drop out of the league for the first time in their history.