Arsenal had a collective day to forget as they were thrashed 5-1 by Liverpool at Anfield on Saturday but spare a thought for striker Pierre-Emerick Aubameyang.

He went into the game as the league's top scorer but had just 13 touches before being substituted in the 71st minute.

To make matters worse, SIX of those touches were from the kick-off.

Don't believe us? Here's his touch map to prove it. 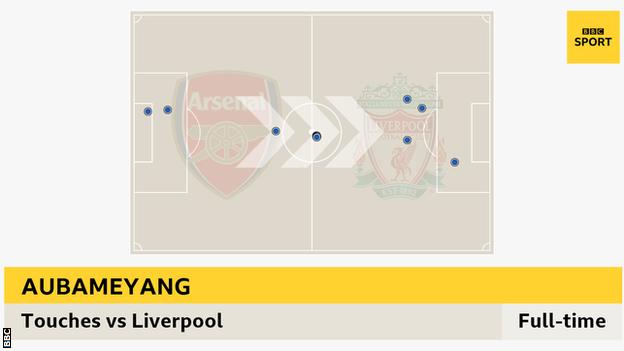 As the map shows, the Gabon international was only given the ball once in the Liverpool penalty area and more of his touches come in his own penalty area than Liverpool's.

Aubameyang's 13 touches was his lowest total in any game he has started this season and only Leicester striker Jamie Vardy has had fewer touches when playing at least 70 minutes in the Premier League this season - he had 11 touches in 87 minutes for Leicester against Arsenal in October.

Unsurprisingly, Aubameyang also made the fewest passes of any player to have played the majority of the match.

He made just 10 passes although they were all successful so he ended the game as the only player with 100% passing accuracy.