Liverpool hold a seven-point lead at the top of the Premier League after putting five past Arsenal at Anfield, while Manchester City moved up to second with a 3-1 win at Southampton.

Tottenham slipped to a 3-1 defeat against Wolves at Wembley, N'Golo Kante's second-half strike gave Chelsea a win at Crystal Palace and Manchester United's renaissance under caretaker manager Ole Gunnar Solskjaer continued with a 4-1 win over Bournemouth.

Brighton defeated Everton 1-0 and Watford and Newcastle played out a 1-1 draw.

But which players earned a spot in my team of the week? 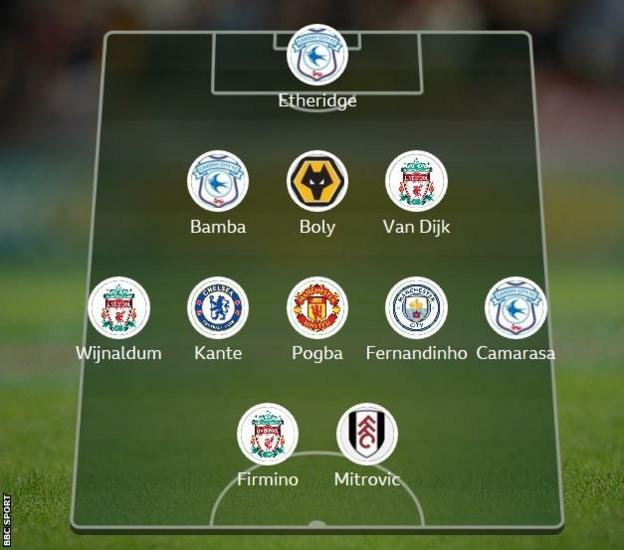 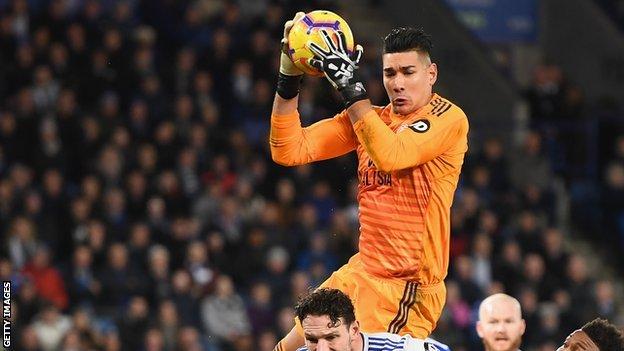 You can't make three penalty saves in a season and call it a coincidence. This is outstanding shot-stopping. Neil Etheridge's performance against Leicester was simply amazing and the catalyst to Cardiff's first away victory in the Premier League and their performance of the season.

His save from James Maddison's late penalty gave the Bluebirds the impetus to go on and win the match. Thank goodness the Philippines international is not going to the Asian Cup.

Did you know? Etheridge's three penalty saves in 2018-19 is more than any other keeper in the Premier League this season. 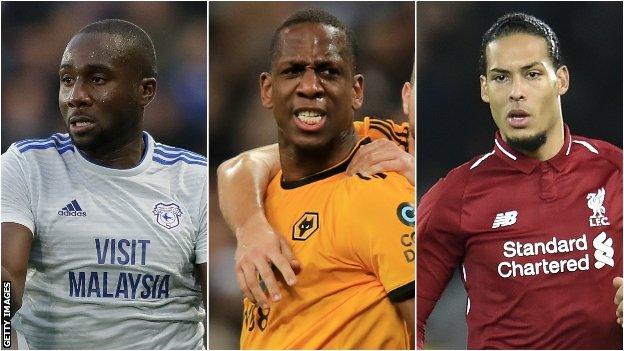 Sol Bamba: I never thought I would see three Cardiff players in my team of the week. Sol Bamba's tackle to clear the rebound from the brilliant penalty save by Neil Etheridge was just superb. The Cardiff defender had to be razor sharp in order to stop Maddison from slotting the ball into the back of the net from the keeper's save.

The Bluebirds are slowly but surely starting to come to terms with the Premier League.

Did you know? Bamba made nine clearances against Leicester; four more than any other Cardiff player.

Willy Boly: His header to equalise was absolutely sensational and set Wolves up for a very impressive win against Spurs. Should Harry Kane have had a penalty when Boly appeared to impede the striker attacking the ball at the near post in the latter stages of the game? You bet your life he should. However, referee Stuart Attwell and his officials thought otherwise and that was the end of that.

Did you know? Boly won 77.8% of his duels against Spurs; more than any other Wolves player.

Virgil van Dijk: He just seems to stroll through games at the moment. This time it was against Arsenal. I actually felt sorry for Pierre-Emerick Aubameyang. Is anyone really suggesting that if they had played with Aubameyang and substitute Alexandre Lacazette up front together Arsenal could have done any worse? I don't think so. Is Unai Emery losing his nerve against the big teams?

Did you know? Van Dijk completed 57 of his 60 passes (95%) against Arsenal, making four clearances and gaining possession six times. 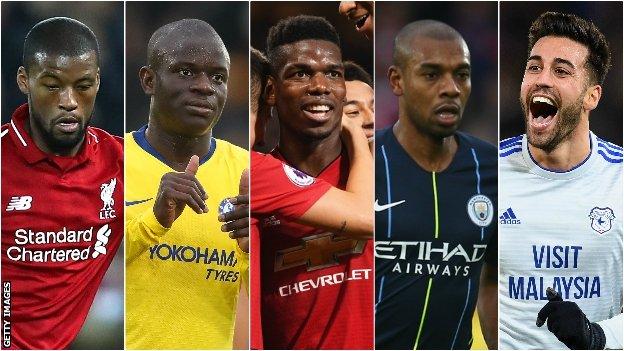 Georginio Wijnaldum: I've made my case in 'The Crooks of the matter' below why Liverpool find themselves top of the table with one hand on the title. And Georginio Wijnaldum's performance against a totally outclassed Arsenal is another reason why the Merseyside club find themselves in such a glorious position. The ovation the Dutch international received when he left the field after 78 minutes said it all.

Manager Jurgen Klopp would be wise to wrap the midfielder up in cotton wool before the game of the season against Manchester City on Thursday.

Did you know? Wijnaldum contested more duels than any other Liverpool player in their 5-1 win over Arsenal (14), winning 71.4% of them.

N'Golo Kante: There has been so much talk among pundits about whether N'Golo Kante should play in a two in front of the back four or in a three behind the centre-forward. Frankly, who cares as long as he's scoring goals. Kante has responded to the requirements set for him by his manager Maurizio Sarri and set Crystal Palace's fortunes back after some impressive performances.

Did you know? Kante scored his third league goal of the season - his best return in a single campaign in the top five European leagues.

Paul Pogba: Well, well, well. What do we have here? Paul Pogba looking like a leader as well as a player. I said a few days ago that if he listened to top former players more his game would benefit. I don't know who he is listening to at the moment but it seems to be working. His performances over the Christmas period have been nothing short of outstanding. The question now is, can he keep it up?

Did you know? Pogba is the first Manchester United player to score at least twice in consecutive Premier League appearances since Wayne Rooney in December 2012.

Fernandinho: Boy, have Manchester City missed this lad. You can talk all you want about Kevin de Bruyne and David Silva but it is clear to me that over the festive period City have not been the same force without Fernandinho. The Brazilian returned from injury for the clash with Southampton and he was instrumental in re-establishing City's personality on the game again. They can't win the title without him.

Did you know? Fernandinho created two chances, played 75 passes and made one interception in the 3-1 win against Southampton.

Victor Camarasa: If ever a goal was worthy of winning a football match then this was it. I had Harry Kane lined up for a place in this team but after Tottenham's capitulation it had to be Victor Camarasa. The injury-time winner sent the Cardiff fans delirious and boy did they deserve it. They have followed their team halfway through the season for this and victories don't come much sweeter.

Did you know? Along with his 92nd-minute winner, Camarasa created more chances (two), made more passes (48) and had more touches (70) than any other Cardiff player. 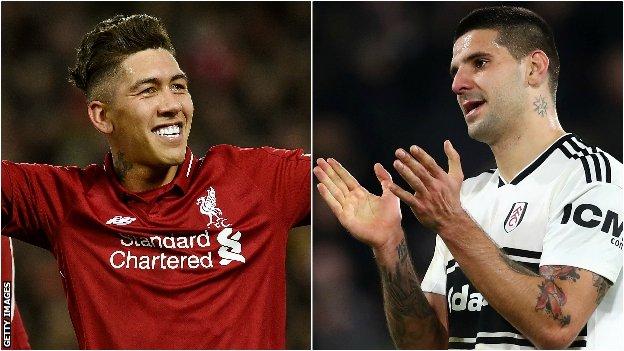 Roberto Firmino: Just when you thought Liverpool might have had a game on their hands Roberto Firmino smashes a hat-trick past the Gunners. There's no doubt about it, when the Brazilian plays well Liverpool seem to excel.

As for Arsenal, manager Emery should know his best team by now and that he does not have a credible defence. This was the worst Arsenal back five I've seen assembled in years. William Gallas and Sol Campbell must be falling about with laughter.

Did you know? Firmino has become the third Brazilian player to score a Premier League hat-trick, after Robinho (for Manchester City v Stoke in October 2008) and Afonso Alves (for Middlesbrough v Manchester City in May 2008).

Aleksandar Mitrovic: This was a massive win for Fulham but no thanks to Aboubakar Kamara. The French forward put himself and his ego before the team. Thank goodness for Aleksandar Mitrovic. The Serbia international remained cool when Kamara refused to give him the ball and then missed the spot-kick.

Mitrovic's response was to score the winning goal and close the gap in the relegation zone. This has given Fulham a lifeline and hopefully taught Kamara a little humility.

Did you know? During 2018, Mitrovic scored 20 league goals for Fulham - seven more than any other Cottagers player.

As 2018 comes to an end I am inclined to look back at the three most significant football moments of the year.

The first was Manchester City's goal by Gabriel Jesus which signalled the club's 100-point record tally. City had already won the Premier League title but now were battling against themselves and guess what? They won.

The second moment was Eric Dier's spot-kick in England's World Cup victory over Colombia during one of the most intense penalty shootouts I think I have ever witnessed. What went through Dier's mind as he stepped up to take the penalty is anyone's guess but the nation held its breath.

When the ball struck the back of the net the impact of the goal hit England like a defibrillator to the heart and the nation began to breathe again. Gareth Southgate's penalty miss in Euro '96 was exorcised and his England managerial career had taken on a new meaning with his success in Russia recognised with an OBE.

The humiliation forced Liverpool to buy one of the best goalkeepers in the world followed by two midfield enforcers. These subtle but important changes have been instrumental in Liverpool's seven-point lead at the top of the table going into the new year.

But it was that Champions League defeat that exposed the truth and is the very reason why Liverpool might, come May 2019, consign City's record points tally to the history books and win the league championship title for the first time in 29 years.