"People can say I am a one-cap wonder, but they are ignorant. I am proud of that cap."

It's eight years since Jay Bothroyd made his only England appearance - as a 72nd-minute substitute - in a friendly against France in November 2010.

On Saturday, the 36-year-old will start his fourth season in Japan - the latest stop in a 19-year career that has taken him from London to Sapporo.

England's most famous export to the J1 League since Gary Lineker in the early 1990s, Bothroyd has easily surpassed the former Tottenham striker's goal tally there - he has scored more than 50 goals, while Lineker didn't reach double figures.

Here, in a wide-ranging interview, he discusses the dos and don'ts of Japanese culture, the importance of an interpreter, mistakes he made as a youngster, playing with epilepsy, and a career facing legends including Paolo Maldini.

Positivity of losing and covering up tattoos

Bothroyd is clearly very happy in Japan, and describes moving there as one of the best decisions he has made in his career.

"I enjoy life out here, I enjoy playing football here. The standard is good. The football is very technical and the stadiums and facilities are really good.

"Ignorant people in England and Europe always undermine the J League because it is not widely watched."

Barcelona legend Iniesta moved to Japan last year, and has admitted he struggled to adapt to Japanese culture, and "how well" fans took defeat.

Bothroyd says he too found it a "culture shock" when he joined Jubilo Iwata in 2015.

"Japanese people, especially in football clubs, want to look to the positive side of things all the time," he says.

"It's confusing when you lose games and some players are laughing and joking. I found it weird, but now I know the cultural differences, as much as I don't really agree with it, it's something that's not going to change."

Japan will host the Rugby World Cup in September - and players have been told to cover up their tattoos to avoid offending people, as they are linked to yakuza crime syndicates.

It is something Bothroyd quickly became aware of when he moved to the country.

"I went on pre-season to a hotel and tried to go in the baths and they said I could not go in there because of my tattoos," he says.

"A few times I have gone to an outdoor pool and worn a top to cover up, but they have still not let me in.

"It is the way it has been for hundreds of years. The western world will find certain things difficult."

Consadole's manager is a Serb - Mihailo Petrovic - who speaks German. His squad includes two Brazilians, a Thai and two Koreans.

With only a "basic" knowledge of Japanese, Bothroyd says interpreter Harry Bissell is invaluable.

Bissell is his voice in the dressing room, explains his manager's instructions at team meetings, training sessions and matches - and also orders drinks on team nights out.

"Japanese is such a hard language to learn. I did take classes for the first six months, but it is so difficult."

And Bothroyd admits he has had to change his approach to talking to his team-mates at half-time.

"When I first came over I was still acting like I was when I was playing in the Premier League. There if you argue with players, have raised voices, or insult people it would be forgotten about five minutes later, but in Japan you can't do that. You have to be respectful.

"If you do it here, people look at you and think you are angry at them, which can intimidate them.

"Harry will leave bits and bobs out when he needs to, or sometimes will tap me on the shoulder if I am about to say something derogatory, something he thinks some Japanese players will not like to hear."

'I have learned to bite my tongue'

Bothroyd started his career in Arsenal's academy, but left for Coventry in 2000 after being transfer-listed when he threw a shirt at a coach after being substituted.

Former Gunners boss Arsene Wenger has said Bothroyd not making the breakthrough under him is one of his regrets.

"Everyone talks about what happened. They could have handled it in different way, rather than sell me," says Bothroyd.

But he admits he had a "bit of an attitude and aggressive mindset" that came from growing up in a rough area of north London.

"As I have got older I have mellowed and learned a lot of lessons," he says. "People have helped me control my anger, taught me to bite my tongue."

After leaving Arsenal, Bothroyd spent three seasons at Coventry, before a year at Perugia in Italy, aged 21.

"I was playing against players I was used to using on Pro Evolution Soccer. Every single team had a legend on it. I remember swapping both of my shirts every game," he says.

After returning to England to join Charlton, Bothroyd had spells at Wolves and Stoke before moving to Cardiff. It was there, while playing in the Championship, that he was called into the national squad by Fabio Capello.

And he believes only injuries prevented him from adding to his one England cap. "There could have been possibilities to play again if I had been fit, but the timing was wrong," he says.

Two seasons in the Premier League with QPR followed, but he found it "difficult" playing under three different managers and the club were relegated in 2012-13.

In 2014 he headed to Asia for the first time - joining Muangthong United in the Thai Premier League.

"It was a poor standard, very unorganised," he says. "In the end I said: 'I can't be be here, you need to terminate my contract'." 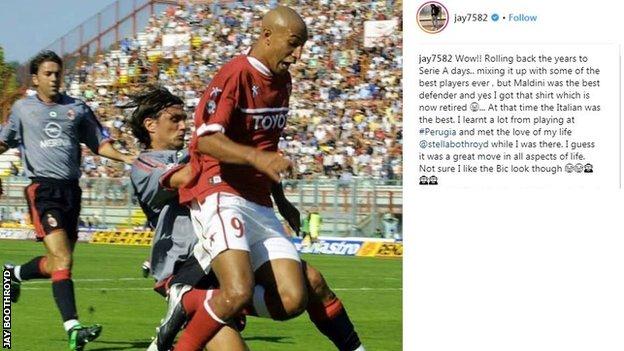 'Epilepsy doesn't hold me back'

Bothroyd has had epilepsy since he was in his late teens, and blacked out while training in 2017.

"I am sure a lot of other athletes have got it, but are scared to speak about it, because clubs look at them and think this could be a problem," he says.

"I openly speak about it, especially as I have got older. I never hide it. I have tried to help players and people who have got it to be positive and tell them: 'You can achieve all you want to achieve.'"

Bothroyd, who has scored 21 goals in 40 games for Sapporo, wants to win the J1 League and the Asian Champions League before he retires.

"For the ability I have and had when I was younger, if my attitude might have been better, of course I could have played for Arsenal. But I have got no regrets, I would not have gone on the path I did, not met my wife in Italy and ended up coming to Japan.

"I do not feel I will retire anytime soon. There are certain things I want to achieve now in Japan and hopefully I can do that."