Kilmarnock striker Kris Boyd has criticised Celtic fans after being hit by a coin and subjected to what he considers sectarian abuse on Sunday.

Celtic say they and Killie will "fully investigate this matter".

"The shouts and abuse I can handle as a bit of banter," Boyd, 35, said on Instagram. "Getting hit with a coin, though, is a step too far."

Police Scotland has confirmed that an investigation is under way "following a number of reported incidents" at Rugby Park and that officers will be reviewing CCTV footage.

Celtic said in their statement: "Clearly if anyone is identified, we will take the appropriate action."

Former Rangers and Scotland striker Boyd had been warming up as a substitute when apparently struck by an object.

"Don't worry, I wasn't injured, but if it doesn't stop, someone will end up with a bad injury," Boyd said. "Thought those days in GB football were over."

Celtic captain Brown was shown a second yellow card and sent off after celebrating with fans at the back of Kilmarnock's goal.

"We're led to believe they're the greatest fans in the world," Boyd said of the visiting support. "Wrecking seats, flares and invading the park.

"Oh, and in case anyone didn't know, I'm just a fat orange (it must just be my favourite colour) [expletive deleted]." 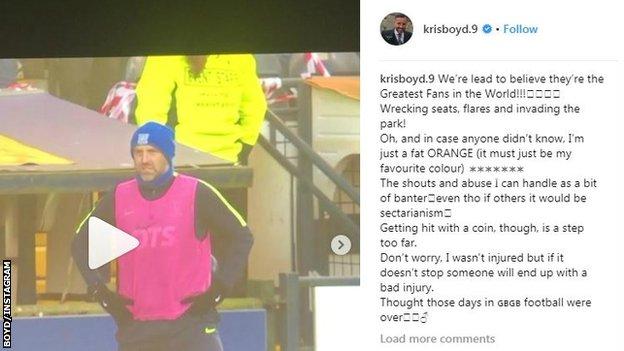 Former Scotland striker Steven Thompson: "We don't want to see it, there's no place for it.

"Kris has very strong opinions as a pundit and as a person, but that doesn't mean, if you don't agree with him, you're allowed to throw a coin at him.

"It's completely and utterly unacceptable."

Former Scotland midfielder Michael Stewart: "There was a spate of it earlier on in the season and thankfully it's disappeared a little bit.

"It's come back there; we want to get it stamped out as quickly as possible. As Thommo says, it's completely unacceptable."