Scotland will face former head coach Anna Signeul's Finland in the Women's Euro Championship qualifiers, with Wales and Northern Ireland also being paired together after the draw in Nyon.

Republic of Ireland play Europe's top-ranked side, Germany, along with Ukraine, Greece and Montenegro ahead of the 2021 finals in England.

Norway are top seeds in the section featuring Northern Ireland and Wales.

Belarus and Faroe Islands are the other teams in Group C.

As hosts, England qualify automatically for the finals.

Holders Netherlands are in the same group as Russia, Slovenia, Turkey, Kosovo, who are taking part for the first time, and Estonia.

Having already agreed to take charge of Finland, Signeul ended her 12-year spell as Scotland coach after the Swede's side reached the European Championship finals for the first time when the tournament was won by the hosts in 2017.

And Shelley Kerr's present side were among the top seeds for Thursday's draw after qualifying for their World Cup finals debut this summer.

Signeul's side are ranked eight places below the Scots, having risen three places to 28th, while Portugal are also up one to 32.

Albania, who lost twice to Scotland in the latest World Cup qualifiers, have dropped two places to 78th, while newcomers Cyprus have yet to achieve a ranking. 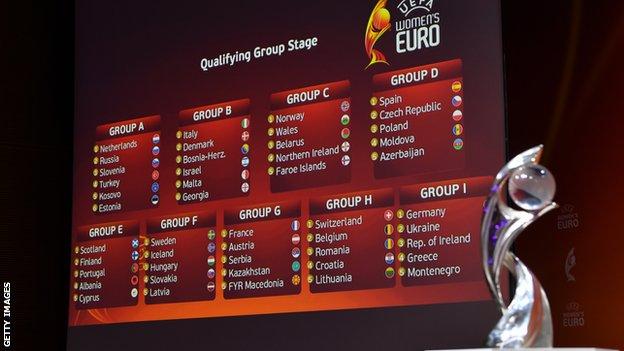 Northern Ireland, ranked 61st, face a re-match with Norway, who beat them twice as the world's 13th-best side topped their World Cup qualifying group.

Wales, now ranked 29th, also lost twice to Norway as they finished third behind the group winners in their Euro 2017 qualifying section.

Republic of Ireland, down three to 33 in the rankings, face an uphill task to finish ahead of Germany, the world's second best team, in Group I.

Azerbaijan have returned to the competition for the first time since 2009, taking the total of entrants to a record 48 teams.

From the nine groups - two with six teams and seven with five - nine group leaders will qualify automatically along with the three best runners-up, while the six other second-placed teams will face play-offs for the final three spots.