City are aiming to retain the Carabao Cup by beating Chelsea at Wembley after United host Liverpool - level on points with City - at Old Trafford.

"Of course, it would be good if United can get a result," Guardiola said.

"But now it is February and it is impossible to talk about winning four."

City trailed Liverpool by seven points on 19 January but a return to top form has seen Guardiola asked once more about the possibility of winning four trophies this season. 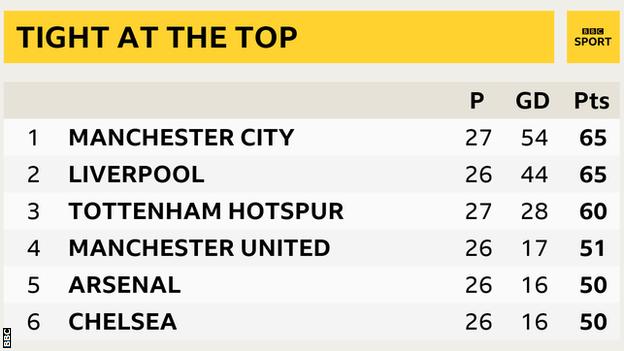 As well as defending their Premier League and League Cup honours, City have an upcoming FA Cup quarter-final against Swansea and took a 3-2 lead at Schalke in the first leg of their Champions League last 16 tie this week.

Guardiola, who has previously referred to the quadruple as "fantasy", said: "We have a final and, once we are in the final, it is the most important game in the season.

"Maybe for United or Liverpool the League Cup is not important because they have many in the trophy cabinet and they have many, many titles, but it's not the case for us.

"Ask me this question [about winning four trophies] in April or May and after I will tell you the answer. I will not lie to you in May.

"But now it is February and it is impossible to talk about that. It sells an illusion. How many times, in England, has one team won four titles in a season?

"Don't put that pressure on our shoulders because we don't deserve it.

"The legacy in Sir Alex Ferguson's United - he never did that. Liverpool in the 80s, how many Champions Leagues did they have in their pockets? They didn't do that."