Hearts defender Clevid Dikamona scored his first goal for the club on Saturday, but it didn't make for a dream weekend for the Frenchman.

While post match he should have been savouring his big moment, instead he had to contend with an online spat with Aston Villa midfielder John McGinn.

On the wrong end of a brutal challenge from St Mirren midfielder Greg Tansey, Dikamona posted about the incident on Twitter.

But then Scotland international McGinn got involved, leading to a tetchy exchange between the pair.

Here is how it all unfolded...

Very much like the schoolboy who began the argument then ran away to let someone else take the flak, Tansey careered into Dikamona during the 1-1 draw at Tynecastle on Saturday.

France-born Dikamona, who has been capped for Congo, was left writhing on the turf in agony. Tansey received just a yellow card from referee Don Robertson.

After that, he was nowhere to be seen as someone else fought his corner instead.

All good arguments are now settled on Twitter. And the social media savvy Dikamona tweeted a clip of the incident along with the line "Fortunately I'm still standing" and tagged the Scottish Professional Football League to let it know his thoughts. 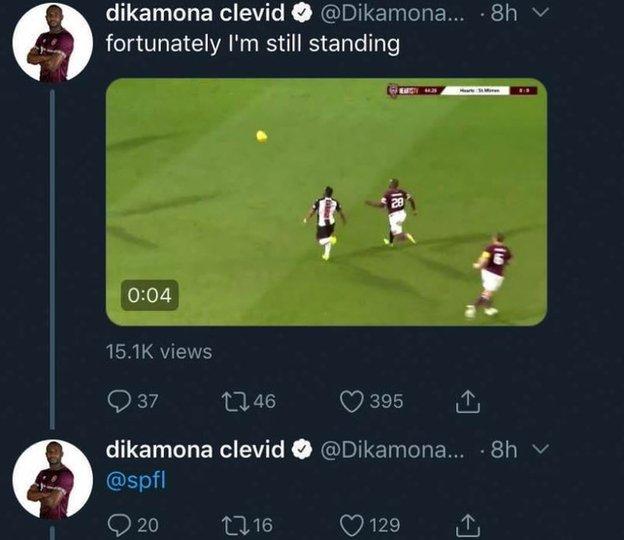 McGinn is now plying his trade at Villa Park after winning the Scottish Cup with Hearts rivals' Hibs.

And he obviously still holds a candle for his old club, St Mirren, with whom he won the League Cup in 2013.

McGinn took no prisoners with his tweet. Short and sharp to the point, he simply stated "Grass".

McGinn won himself a few likes and retweets and a few disgruntled fans stood up for the Hearts man - and the argument looked to have been ended there.

However, Dikamona - perhaps not realising the dig was likely just a joke - was not taking it lying now. Well, at least not for a second time.

He fired back: "You're probably the kind of player who does this, knowing you're protected by a referee after."

Dikamona has since deleted his tweets, but McGinn is still happy to have "Grass" on his page, likely quite pleased at himself for manage to rattle the Hearts man.

McGinn was also fortunate to be standing after once being speared with a pole by his then Saints team-mate, Stephen Thompson, in training.

As Hearts manager Craig Levein once said: "It's a good laugh isn't it?"