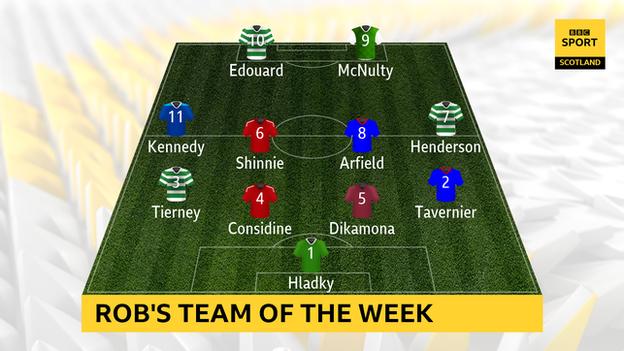 With 21 goals scored over three days, the weekend Scottish Premiership card gave BBC commentator Rob Maclean plenty to ponder for his team of the week. Here's his selection...

Three saves in the space of five seconds at Tynecastle on Saturday is enough to win St Mirren's Vaclav Hladky the goalkeeper's jersey. The Czech goalie's performance in the 1-1 draw with Hearts went a long way to securing a struggling Buddies side a precious point.

Yet another assist for James Tavernier, crossing for Jermain Defoe to score at Hamilton. Yet another penalty as the Rangers captain netted his 12th successful spot-kick of the season. Yet another sizeable contribution.

Clevid Dikamona got off to a shaky start at Hearts, but the Congo defender is starting to settle and certainly does not lack physical presence. Powerful in defence and attack, he scored his first goal for the Jambos on Saturday.

Long-serving Aberdeen defender Andy Considine is not always an eye-catcher and often the quality of his defending slips under the radar. But he was a top performer in the 2-0 win away to St Johnstone that strengthened the Dons' hold on third place in the Premiership and helps keep alive their hopes of claiming another runners-up finish.

Kieran Tierney returned from a two-month injury absence, pulled on the captain's armband and bounced back to business as if he had never been away. Celtic miss their 21-year-old left-back big time when he's not around, but he's back now to bolster their bid for a treble treble.

You had to remind yourself at Celtic Park on Sunday that 18-year-old Ewan Henderson was making his first start for the league leaders, so assured was his midfield performance. Getting game time will be difficult when everyone's fit, but he certainly snapped up his chance in the weekend win over Motherwell.

If Rangers are to win the Scottish Cup and/or get themselves back into title contention, midfield powerhouse Scott Arfield will surely play a big part. He was a big influence, as well as a goalscorer, in his team's second 5-0 win inside five days, the hammering of Hamilton.

Aberdeen captain Graeme Shinnie delivered the complete midfield performance in the 2-0 defeat of St Johnstone in Perth on Saturday. Plugging gaps at the back, driving his team forward and scoring both goals. The Dons will struggle to hold on to him.

Matty Kennedy could not have done much more to try to get St Johnstone something out of their game against the Dons. The former Scotland Under-21 winger showed a great attitude, even when the game was slipping away from Saints, and was a constant attacking threat.

Celtic's Odsonne Edouard made scoring from 30 yards in the 4-1 defeat of Motherwell look ridiculously easy. He had earlier powered home a header - his first goal since Boxing Day. The young Frenchman has just turned 21 and has the talent to be whatever he wants to be.

Hibernian's Marc McNulty was lucky he did not see red for flicking his boot into the face of Dundee's Ryan McGowan, but the on-loan Reading striker is certainly making headlines with his goalscoring. That's four in his past three games after a double at Dens Park and he's building a potent partnership up front with Florian Kamberi.