Tottenham celebrated the official opening of their magnificent new £1bn stadium with a crucial victory over Crystal Palace to cement their place in the Premier League's top four.

After two dress-rehearsal games, Spurs staged the opening ceremony before kick-off, 689 days after their last league fixture on this site against Manchester United.

And, after a series of celebrations to mark the occasion, Spurs overcame a nervous first 45 minutes in their new home to record their first Premier League win since 10 February when they beat Leicester City at Wembley.

South Korean Son Heung-min will take his place in history as the first player to score a Premier League goal here when his shot from the edge of the area deflected in off Luka Milivojevic after 55 minutes.

And the win was sealed 10 minutes from time when Christian Eriksen scrambled home from close range as Harry Kane looked for a penalty after tangling with James McArthur.

It rounded off the perfect night for Spurs, in front of a crowd of 59,215, as they leapfrogged arch-rivals Arsenal to go third, a point ahead of the Gunners, who have a game in hand, and Chelsea. 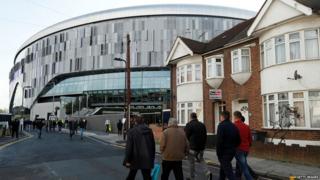 This magnificent sweeping stadium is a spectacular arena that proved well worth that 689-day wait. It ranks alongside any in the world.

Spurs fans gathered around their new home hours before kick-off, the space-age structure dominating the skyline and the local area.

And the pre-match ceremonials matched the occasion, with the stadium's place in the community highlighted alongside the obvious sporting and financial benefits to Spurs.

The motto for the occasion was 'Welcome Home' and one English tradition, the weather, obliged as the stadium was hit by a dramatic hail and snow storm an hour before kick-off.

And the vast South Stand, rising in one tier and home to 17,500 fans, was already providing a wall of sound when the pomp and ceremony got under way.

A giant golden cockerel, illuminated in the night sky, looked down from that stand as Gladesmore Community School choir performed "Everybody Dreams", which was written as an anthem of hope for the area's young people after the Tottenham riots in 2011.

As the teams lined up, award-winning tenor and Spurs' fan Wynne Evans and former Gladesmore student Lanya Matthews delivered a rousing rendition of "Glory, Glory Tottenham Hotspur" before a spectacular firework display whipped around the roof of the stadium.

The first-half mediocrity rather poured cold water on the mood of celebration but when the action did materialise, and the opening goal was scored, the roars and atmosphere confirmed Spurs' new home combines all the mod cons with good old-fashioned atmosphere.

Having not won in the league for nearly two months, these new surroundings can provide renewed impetus as they fight for a top-four place and prepare for a Champions League quarter-final first leg against Manchester City here next Tuesday.

The performance may not have been one of their best but the scoreline and the occasion was exactly what Spurs and their supporters, who revelled in finally being able to take their seats, would have wanted.

The sight of Arsenal overtaking Spurs in the Premier League with victory over Newcastle United on Monday will have acted as a jolt to the system of Mauricio Pochettino's side after the disappointment of their own last-minute loss at Liverpool on Sunday.

It certainly focused the minds of players away from the party taking place around them.

Spurs are now in a serious fight for a place in the top four along with Arsenal, Chelsea and Manchester United, so all the flag-waving and elation of this landmark occasion would have been seriously diluted had they extended a sequence of five league games without a win.

In unfamiliar surroundings, it was perhaps inevitable that Spurs took some time to get going and for a while it was Crystal Palace's supporters who were making most of the noise.

Roy Hodgson's side, organised and resilient, made Spurs fight for this win that will revive some of the confidence that has been lost recently - the only surprise being that Harry Kane did not get a goal to mark this new beginning.

In among all the fanfare, this was a night when victory was what mattered most and manager Mauricio Pochettino and his players will be relieved and delighted to have succeeded in the serious business.

What next for Crystal Palace?

Crystal Palace are where you would expect them to be under Roy Hodgson - relatively safe, unthreatening, now living comfortably around mid-table.

There was genuine, and understandable, disappointment among Palace fans and criticism of Hodgson when they lost in the FA Cup quarter-finals at Watford, a sense of a big opportunity missed.

Here they were stubborn, kept Spurs at bay for almost an hour but then did not really threaten until it was too late. They came and went without contributing much.

Palace are in no danger of going down but there remains the suspicion they could and should be doing much better, producing much more, with the talent at Hodgson's disposal, especially at home in one of the Premier League's most atmospheric and supportive stadiums.

They are functional and methodical in a typical Hodgson way but there is enough quality in this side to be better than that and this has been little more than a holding operation this season.

Tottenham will now start preparing for Tuesday's home Champions League quarter-final first leg with Manchester City (20:00 BST). Palace are back in action on Saturday when they are away at Newcastle in the Premier League (15:00 BST).

Read more on Wolves knocked out of Europe by late goal