Alan Shearer scored his 260th and final Premier League goal for Newcastle against Sunderland on 17 April 2006.

In the 13 years since, no player has come within 50 goals of this record tally for the competition.

But there are currently a small crop of attacking players with aspirations of claiming Shearer's crown, led by Sergio Aguero and including established goalscorers such as Harry Kane, Romelu Lukaku and Mohamed Salah.

Here, BBC Sport does the analysis to see if any of these players are capable of breaking the record and, if so, what more they have to do to surpass one of the Premier League's most iconic milestones.

Shearer's total of 260 is particularly impressive, given that it does not include the 23 goals he scored for Southampton in the old First Division, before it was rebranded as the Premier League in 1992.

An injury picked up 10 minutes after scoring his last goal - from the penalty spot at the Stadium of Light - would ultimately bring his career to an end, at the age of 35.

Shearer began his career with Southampton but joined Blackburn for a then British record £3.3m deal before the very first Premier League season in 1992-93, then joined hometown club Newcastle in 1996, this time for what was a world record fee of £15m.

But how do Shearer's goals break down across his 14 seasons and how do the current tallies of the leading candidates looking to emulate him stack up? 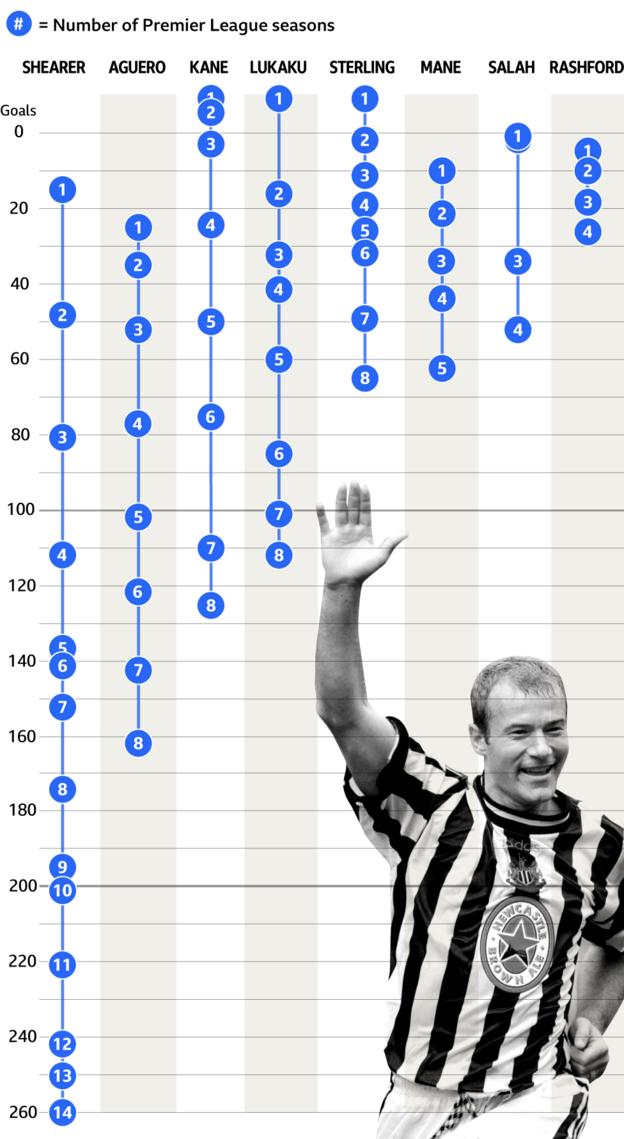 The rivals for Shearer's crown

As it stands, there are three current Premier League forwards with more than 100 goals to their name and, realistically, enough time on their side to threaten Shearer's tally.

Beyond this trio are a set of young forwards who have a less substantial tally to their name but have both the demonstrable prolific touch and enough seasons left in their career to mount a challenge - Manchester City's Raheem Sterling (66), Liverpool duo Sadio Mane (62) and Salah (53) and Manchester United's Marcus Rashford (27).

For the fairest purposes of showing what each needs to do to beat the record, we're presuming each plays in the Premier League until the first season in which they are 35 years old, matching the age at which Shearer ended his English top-flight career.

No top player can avoid injury entirely during their career. Shearer missed a number of games because of this. A knee injury forced him to miss around half of his first season at Blackburn, while at Newcastle, there was an ankle problem that restricted him to 17 appearances in 1997-98 and issues in 2000-01 that saw him play 19 times in the league.

Aguero has tended to pick up knocks each season, as a result of the combative way he plays, while Harry Kane is likely to sit out the rest of this campaign with an ankle injury.

Shearer's efficiency understandably dipped with age, something that is also likely to affect his challengers as they progress through their 30s. He averaged a fraction over 20 goals a season in his first 10 Premier League campaigns, but 14 for his final four.

And then there are inevitable dips in form, the strength of the team in which they play and a possible move away from the Premier League - all of which would affect (or end) these players' ability to break the record.

Aguero and Kane the only likely contenders?

If we take fitness, form and all the other factors out of the equation, and base our analysis on the assumption players will continue at their current scoring rate, how many games will the above players to need to beat the record?

This is potentially harsh on some of the players, particularly Rashford and Sterling, whose goalscoring rates are increasing season on season. Rashford is currently enjoying his most prolific season to date in front of goal, while Sterling is one goal away from matching his best campaign for goals - last season's 17.

However, what it illustrates is that Kane is currently best placed to break the record, with Aguero the other main likely contender.

The rest require either a remarkably consistent run of fitness and form or a notable uplift in their scoring rate to even be considered a candidate to end Shearer's long-standing reign as the Premier League's greatest goalscorer.