Almost five years since Liverpool's title chances were ruined by a 2-0 defeat in the same fixture, the hosts kept themselves in the hunt for a first league title in 29 years with two goals in the space of two minutes that saw Anfield erupt.

After a nervy first half in which both sides had chances, Liverpool emerged from the break with added purpose and took the lead via Sadio Mane's header.

There was a huge sense of relief inside the ground, but that became a deafening roar when Salah smashed a left-footed angled drive into the top right corner from 25 yards for his 19th Premier League goal of the season.

Chelsea, who had been unbeaten at Anfield since 2012, almost hit back six minutes later when Eden Hazard shot against the post before the Belgian saw another effort saved by goalkeeper Alisson.

But Liverpool could have extended their lead before an exultant Kop greeted the final whistle with roars of delight and Jurgen Klopp punched the air after his 200th game in charge.

Manchester City, 3-1 winners at Crystal Palace in Sunday's other match, still have a game in hand on the Reds, but with games at home to Tottenham and away to Manchester United among their five remaining fixtures, their task looks tougher than the one facing Liverpool, who meet Cardiff, Huddersfield, Newcastle and Wolves.

Chelsea remain fourth, a point behind Tottenham, who have a game in hand on their London rivals. Maurizio Sarri's side could also be overtaken by sixth-placed Arsenal, who are three points behind them, when they face Watford on Monday. 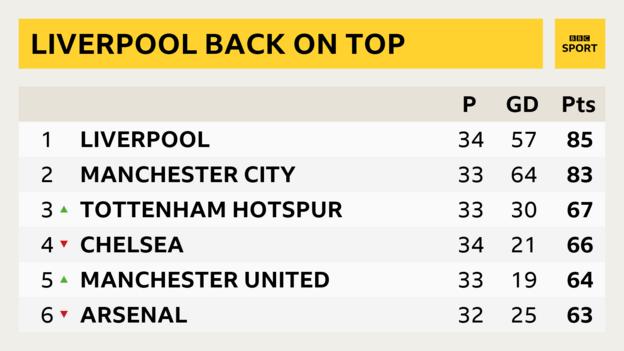 Salah strikes back against former employers

Salah, who played for Chelsea when they beat Liverpool in that infamous game in 2014, was the hosts' most dangerous outlet, and could have given them an early lead when his back-post volley was well saved by Kepa Arrizabalaga.

The Egyptian, who was cheered even more loudly than usual by the Kop after being the subject of discriminatory abuse in a video posted by Chelsea fans last week, also squared to Mane seven minutes before half-time but the Senegalese forward curled wide from 10 yards out.

It looked like it might be a frustrating afternoon for Salah, who was well marshalled by Chelsea left-back Emerson in the first half. But Liverpool's talisman showed his tenacity to win the ball back before Jordan Henderson clipped across the six-yard box to find Mane for the game's opener.

And the shot that doubled the hosts' lead will live long in the memory as one of Anfield's great goals. Not only was it sublime in its execution, but it was hugely significant in the title race, showing Liverpool are not the same side as five years ago.

Coming on the day the club marked the 30th anniversary of Hillsborough, the victory gave home fans a huge lift on an emotional afternoon.

Despite their long unbeaten run at Anfield, the defeat continued Chelsea's poor run of form away from Stamford Bridge this season under Sarri. They have now lost seven away games this season.

After defending resolutely in the first half, the game could have swung their way had Willian not skewed wide from a quick attack and Hazard done better from a tight angle before the break.

But as in their 2-0 defeat at Everton last month, when the home team also scored shortly after half-time, Chelsea could not respond. Hazard, who scored the winner in the Carabao Cup tie at Anfield earlier in the season, came closest to replying but his shot cannoned back off the post.

It is a loss that dents their hopes of reaching next season's Champions League via the top four - although they could still reach it via the Europa League. Chelsea hold a 1-0 lead over Slavia Prague going into the second leg of their quarter-final next Thursday.

'It's very overwhelming' - what they said

Liverpool manager Jurgen Klopp speaking to BBC Sport: "I'm so proud of the team, it was a fantastic performance. What a team, what a stadium, what an atmosphere. I'm so thankful I can be a part of this, it's great. It's just outstanding, very overwhelming at times.

On the title race: "The first question in the meeting today was 'what is the City score?' You cannot avoid knowing about it. But it isn't interesting to us.

"We expect them to win all their games so we just need to get as many points as possible and if we're champions then great but if not it is still a really good football team."

Chelsea boss Maurizio Sarri speaking to BBC Sport: "I think we played very well in the first half, we defended very well. We conceded nothing.

"I am happy with the performance, because in my opinion we played a good match against a very good, strong opponent.

"I think now we are going the right way, we are improving, because three months ago we weren't able to stay in this kind of match but today we played well.

"And then we were unlucky after the second goal because we reacted very well and had three goal opportunities in three minutes."

Chelsea's poor run at the big six continues - the stats

Liverpool take a 2-0 lead to Portugal for the second leg of their Champions League quarter-final against Porto on Wednesday before a trip to Cardiff in the Premier League on Sunday, 21 April.

Chelsea are also in European action against Slavia Prague in the Europa League quarter-final second leg at Stamford Bridge on Thursday, before hosting Burnley back in the league on Monday, 22 April.