A Ben Foster howler and a needless Troy Deeney red card helped Arsenal climb back into the Premier League top four with victory at Watford.

Goalkeeper Foster gifted the Gunners an opening goal after 10 minutes when he took too long on the ball after collecting a back pass, allowing Pierre-Emerick Aubameyang to charge down his clearance and deflect the ball in.

Just a minute later, Watford captain Deeney was sent off for throwing his forearm into the face of Arsenal midfielder Lucas Torreira in a late challenge.

Despite playing with 10 men for 80 minutes, Watford offered the far greater threat, hitting the bar through Adam Masina's powerful drive from distance in the second half, and forcing Arsenal goalkeeper Bernd Leno into a number of excellent saves.

The German denied Craig Cathcart well with his feet shortly after Deeney's red card - and later in the first half dived at full stretch to tip away Etienne Capoue's goalbound free-kick.

Ainsley Maitland-Niles also produced a crucial block with 10 minutes remaining when he slid in to block Andre Gray's shot after the Watford striker had rounded Leno.

The visitors' only real chance came midway through the second half but Foster brilliantly spread himself to block Henrikh Mkhitaryan's volley from close range.

The Gunners were well below their best but the rare away win could prove crucial in the race to qualify for next season's Champions League.

They climb two places to fourth in the table, two points clear of Manchester United and ahead of Chelsea on goal difference.

On the balance of play, Watford should have taken three points from this game; a win would have seen them jump from 10th to seventh in the Premier League.

Instead they were left ruing two foolish incidents within 95 seconds of each other.

There seemed little danger when Foster collected a back pass just outside his six-yard box but he dawdled on the ball allowing the pacey Aubameyang enough time to close him down.

Deeney's foul was not vicious or particularly dangerous, but foolish and unnecessary.

He chased down Torreira deep in the Arsenal half and after the Uruguayan had passed the ball threw his forearm into his opponent's face.

Deeney said Arsenal lacked "cojones" after Watford won this fixture last season, adding that "whenever I play against Arsenal, I'll go up and think, 'let me whack the first one and see who wants it'". He may not have had those comments on his mind tonight but they will likely amuse Arsenal fans.

Following the red card, Watford were far superior and in the final 20 minutes it was they who were pressing for an equaliser, rather than Arsenal looking likely to score a second goal.

Had Watford, and in particular Gray, shown greater composure in the penalty box, then they may well have taken at least a point.

The Gunners too lacked composure when they did get into attacking positions, and for the most part their build-up play was too slow, but the win could prove crucial nonetheless. 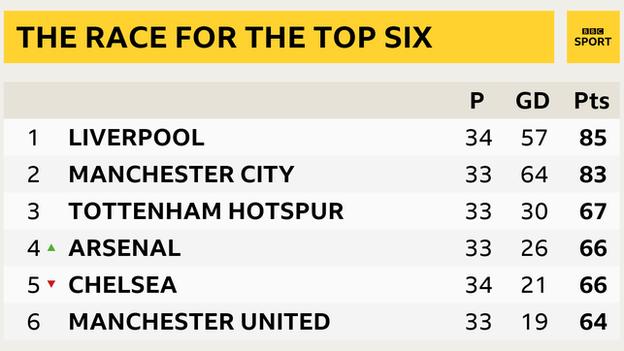 Arsenal had only won two of their away games in 2019 before this match - at bottom-of-the-table Huddersfield and at League One Blackpool in the FA Cup.

Their home form - the third-best in the league - has kept them in the hunt for the top four, and a rare win on the road keeps them in control of their hopes.

Leno's good saves, key clearances from captain Laurent Koscielny and Watford's wastefulness allowed them to keep their first clean sheet away from home this season. They had the only top-flight side without one on their travels.

Unlike their top-four rivals, Arsenal do not play any of the Premier League's 'big six' before the end of the season - but must keep winning on the road if they are to seal Champions League qualification.

They have tricky away games to come against seventh-placed Leicester and eighth-placed Wolves as well as a trip to Burnley on the final day.

Watford manager Javi Gracia, speaking to BBC Sport: "I am very proud of my players. I am not interested in the result, we had our chances, hit the woodwork and created chances with 10 players.

"I respect the referee's decision. In my opinion it is clear, maybe a yellow card but never a red card. I do not agree with the decision.

"Troy is very sad. It was an important game for us, he knew it. The sending off was very tough for us."

Arsenal manager Unai Emery speaking to BBC Sport: "We were competitive today but in the circumstances we can control the match better. We didn't make it easy to score the second goal. We did not control the ball in the attacking third.

"A clean sheet is very important. It is going to give us a lot of information, this match. Our analysis will give us confidence.

"For some players like Konstantinos Mavropanos it is good, to play some minutes and give other players some rest for Thursday. It is a different competition; we have a two-goal advantage against Napoli but it is going to be very difficult."

Arsenal travel to Napoli for their Europa League quarter-final second leg on Thursday (20:00 BST kick-off) as they look to defend a 2-0 lead.

The Gunners' next Premier League game is against Crystal Palace on Sunday (16:00 BST).

Watford travel to Huddersfield in their next game on Saturday (15:00 BST).