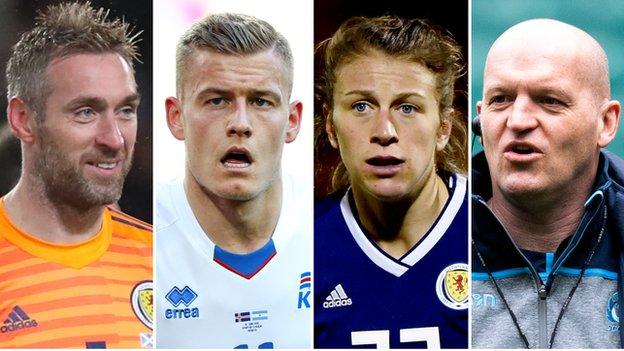 Leigh Griffiths, Allan McGregor and Marc McNulty have all played for Scotland in the recent past. Darren Fletcher, Kenny Miller and Gary Caldwell did so not too long ago.

All of them have one thing in common - Hutchison Vale. The Edinburgh boys' club was accepted as the Scottish FA's 90th member club in August 2018 - under the name Lothian Thistle Hutchison Vale - but their contribution to the national game already outstrips that of many of their new rivals. But what has made them so successful?

'We walked past it... surely that couldn't be it?'

Speak to any of the former players, and they all mention the "wee hut" that the club calls home, just off Fords Road in the west of the city. Miller talks about it being "filled with trophies and pennants from all over the world". Townsend talks of the competitive atmosphere that permeated the place. Finnbogason, who moved to Edinburgh with his family as a nine-year-old while his father did a business degree, has another memory.

"I still remember my first day," the Augsburg striker tells BBC Scotland, casting his mind back to 1998. "I went with my dad and we came to this small bit of grass - you wouldn't call it a pitch - but we walked past it because we thought, surely, that couldn't be it. But then we found the clubhouse and it turned out that bit of grass was where we were training."

Club leader Tam Smith remembers Finnbogason's father being aghast. "He said this would be laughed at in Iceland, that it wasn't fit for purpose," he says. "But when people walk in the door, and see what is almost a museum with all the stuff that's been collected over the years, they realise it is something quite unique and a place with real history."

The old scout hut, which Smith suggests might be the worst facility of any club in the city, was bought when 'Hutchie Vale' was resurrected in 1967 after a decade in abeyance. That interruption came after then club leader 'Ma' Bryson was given an indefinite ban for abusing a referee.

"She was feisty," says Smith. "So they waited until she went on holiday then they banned her."

Bryson had replaced a gentleman known only as Mr Cleghorn, who founded the club in 1940 after rounding up a disparate group of kids playing in the streets in the Hutchison area of Edinburgh, kitting them out in a set of yellow and black Aberdeen jerseys, and moulding them into a team.

Among them were Tommy Younger, who would play for Hibernian and Liverpool, and represent Scotland at a World Cup, before becoming president of the Scottish FA, and George Farm, who kept goal for Blackpool in the famed 'Matthews' FA Cup final of 1953 and appeared 10 times for his country.

So the club has, from its earliest days, had real pedigree. The roll of honour inside the clubhouse attests to that. So what is the secret?

Smith talks of a simple ethos that started in the mid-70s and has been maintained ever since. Discipline, organisation and fitness underpin everything, along with the credo that the ball should be kept on the ground and that no negative shouting is allowed on the pitch or from the sidelines.

"I keep kids together from 13-17 unless they want to go - it settles them and takes the pressure away," says the 60-year-old, who has led the club since 1989 and been involved for 33 years. "We've done all right with the meagre budget and facilities we've got, but we could have done so much more."

Those who have come through the system are glowing in what Hutchie Vale have achieved.

Finnbogason, 31, spent 18 months with the club and played in the same side as Hibs defender Paul Hanlon. He describes that time as a "learning experience that helped me later on when I moved to new countries" and talks of being helped tactically by the fact he was exposed to 11-a-side football rather than the smaller-sided games he was used to in Iceland.

"We had a really good team and a couple of boys went down to Manchester United so there was a real buzz about the club," says the forward, who has played for Heerenveen, Olympiakos and Real Sociedad.

Townsend, who was invited for a trial after impressing for a Borders school select side, spent a similar amount of time there, starting as a striker before being moved back to defensive midfield.

"It was great," he tells BBC Scotland. "I thoroughly enjoyed it. I had this naive view I could play football one day, and rugby the next, but at under-14 level I had to make a choice."

For Miller, the recipient of 69 Scotland caps, it was about the mentality it gave him.

"It was the biggest and best boys clubs in the area," he says, having joined as an 11-year-old. "It was ingrained in me early that I had to win; just walking into the clubhouse you could see that and those demands were put on you at that young age."

Miller left in 1996 to join Hibs and Smith still has the letter from the Easter Road club offering £200 in compensation. He also remembers a former Easter Road captain and Scotland international - Ian Murray - coming along for the first time as a six-year-old.

Then there is the story of Griffiths' father phoning and asking whether Smith would take in his 14-year-old. "He didn't want to leave when Livingston came in for him because we were going for the Scottish Cup. I practically had to drive him there myself," he recalls. 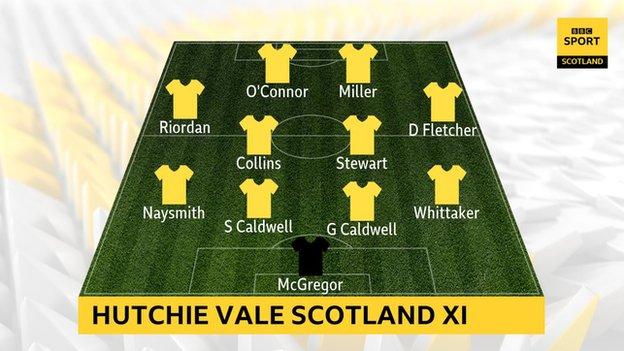 Uncertain future despite gilded past?

Throughout the past 30 years, the ambition has been to earn a place in the East of Scotland League, so that the players have a pathway to senior football. Finally, through an agreement with Lothian Thistle and slight change of name, they have managed to achieve that aim as Hutchison Vale Lothian Thistle.

But Smith has grave concerns about what the future might hold. He says schools football in Edinburgh is "almost non-existent" now in comparison to years gone by. "About 28% of kids in Edinburgh go to private school and their parents are the decision makers, but what about the rest of the kids? Who is fighting for them?" he asks.

On a weekly basis, Smith has parents phoning him to ask if they can bring their kids along. The reason, he says, is the reputation they have developed for ensuring they turn out good people as much as good footballers.

He points towards the fact Hutchie Vale have had a women's team since 1991 and the introduction of a code of conduct that ensures parents are punished for spouting negativity from the touchline. But he also outlines the difficulties in keeping all this going.

"It's hard when you've no dosh and utilities companies are trying to get massive bills out of you," he says. "And getting pitches is a massive problem in a rugby city. If football truly was the national game, we would be investing in it. Scottish football has been trying to build a house from the roof down for years by throwing money at senior clubs, but surely you've got to factor in where players come from."

In a lot of cases, those players have come from Hutchison Vale.