As that grim spectacle unfolded in San Marino last month - a performance so awful that even the captain Andy Robertson called it "rock bottom" - the Scotland fans, already bruised and battered from the calamity in Kazakhstan a few days earlier, started to crank up their anger, from good old fashioned booing to something more vitriolic.

They went after the board of the Scottish FA, demanding, rather optimistically, that they all be fired. Mainly, though, their thunder was reserved for Alex McLeish, the beleaguered manager at the heart of another horror-show. "You're getting sacked in the morning!" the fans hollered.

Sacked in the morning? No. Sacked 28 days later? Yes. After 12 games in 14 months featuring 49 different players and an incalculable amount of negative comment, McLeish has now lost his job.

At some point soonish some of the same people who tried to appoint Michael O'Neill, who they couldn't afford, before turning frantically to Walter Smith, whose patience they exhausted, and who then, with hair on fire, gave the job to McLeish, will appoint a ninth manager of the millennium. It's fair to say that supporter faith in their judgment headed south a long time ago. Currently, it's residing in Antarctica.

Poor performances did for McLeish, but there was more to it than that, more than mere losses that chipped away at his credibility. Controversial formations, mass player defections, odd pre- and post-match comments - it all unravelled quickly.

Truth be told, McLeish needed to be remarkable to win over the doubters from day one, the fans who never wanted him in the first place because he walked out on Scotland before, because his recent track record in management was poor, because he was seen as an unambitious and uninspired choice by a board - Alan McRae, the president, in particular - who seemed to be putting the appointment of an old pal ahead of the national interest.

McLeish did not deserve to be left dangling in uncertainty this past month - Scottish FA prevarication did him no favours - but there could only have been one sensible conclusion to this. The last shred of faith in his ability to take the team forward - and to take advantage of the red carpet to Euro 2020 that is the Nations League - had run out.

It was an unhappy 14 months, pockmarked by bitterness and rancour and suspicion. Before his first game, at home to Costa Rica, McLeish said that he wanted his team to play with the kind of swagger they had in his first incarnation as Scotland manager. They were booed off after a 1-0 loss.

In fairness to McLeish, he was never slow in giving players a chance, partly because he had no choice given all the call-offs he experienced. In that Costa Rica game, he gave debuts to Scott McKenna and Scott McTominay. Getting the Manchester United player on board might yet be seen as McLeish's biggest legacy.

He won his second game, against Hungary, but then the grim decision-making of his employers conspired against him. An end-of-season trek to Peru and Mexico was needed like a firm kick to the unmentionables. Key players withdrew in rapid order.

Against Peru, McLeish gave debuts to seven players - Lewis Stevenson, Lewis Morgan, Chris Cadden and Dylan McGeouch among them. They lost 2-0 to a team readying itself for the World Cup. It finished 1-0 against Mexico - another side finishing preparations for the party in Russia. Given the ridiculously trying circumstances, the results were credible, but they were damaging at the same time.

Those two defeats added to the greyness around the Scotland squad. What McLeish could have done with next was a gimme, a handy friendly to boost the morale, not just of his players but of the support. He desperately needed to win them over. What he got was a game against Belgium - the third-best side in the world at the time - and a thumping 4-0 loss at Hampden.

Four defeats in five games and just one goal scored. Only 20,196 turned up to watch. A darker shade of grey now. As was so often the case, McLeish didn't help himself before that Belgium game when he said his team were good enough to go "toe-to-toe" with Eden Hazard and co. Nobody believed him when he said it. It made him look silly when the World Cup semi-finalists, unsurprisingly, took his team to the cleaners.

Only now - in September 2018 - did McLeish get his first competitive game, a Nations League tie at home to Albania that Scotland won 2-0. It was a decent performance albeit against a poor team. Perhaps the most revealing thing that night, though, was the size of the crowd - fewer than 18,000. "I'm building a wall, not papering cracks," McLeish said.

Saying that is all very well so long as people can see the blocks being put in place. A month later, they collapsed to a 2-1 loss in Israel, a nation with a world ranking that was 55 places below Scotland. McLeish lost John Souttar to a red card after an hour, but they were in all sorts of trouble before he exited. The 2-1 scoreline didn't flatter Israel. They had 25 attempts on goal.

Israel had only win in their previous 10 games. The only teams they had beaten in their own stadium in four years were Liechtenstein and Andorra. Scotland made them look like France.

By now the ire of the fans was being directed at the Scottish FA as much as it was at McLeish. They flew the team to Israel the day before the game, then experienced a delayed flight that saw McLeish having to hold a training session at 10.30pm local time. The logistics off the field were almost as wretched as the performances on it.

McLeish was getting pelted with flak for persisting with his 3-5-2 formation, a square-pegs-in-round-holes set-up that made the team looked utterly perplexed as to what they were supposed to be doing. In the aftermath of the Israel loss, a BBC Scotland poll asked if the defeat was the biggest embarrassment in the history of the national team - 38% said it was, with the 5-1 lost to the USA a distant second on 19%.

Past the point of no return

Those grey clouds had turned black and blacker still when Portugal turned up in Glasgow and strolled to a 3-1 win without many of their big stars. It was a sixth defeat in eight games in front of a half-empty Hampden. Once more, McLeish was left defending the players who had cried off. Nothing sinister, he said.

There was brief respite when Scotland, inspired by James Forrest, won 4-0 in Albania before beating Israel 3-2 at Hampden to top their Nations League group. Even then, though, it was not straightforward. Scotland played some really good stuff but, in the dying minutes, Allan McGregor had to make a magnificent save from a Tomer Hemed volley.

Had Hemed scored Scotland would have been out of the Nations League and the cries for McLeish to be out of his job would have been deafening. Those cries came soon enough, though.

Scotland went to Kazakhstan without some important players, most notably Kieran Tierney, Robertson and Ryan Fraser. It was a footballing Armageddon. Kazakhstan were ranked 117 in the world, but they were 2-0 ahead inside 10 minutes and added a much-deserved third later on. Once again the pollsters got busy. Once again a new historic low had been reached.

San Marino was the point of no return, a hopelessly laboured effort against the worst team in international football. It was a nervous and timid performance, another day that screamed of the need for a new direction. It's over for McLeish, but having seen him as the solution when so many things told you he wasn't, there'll be anxiety about who these people at Hampden come up with next. 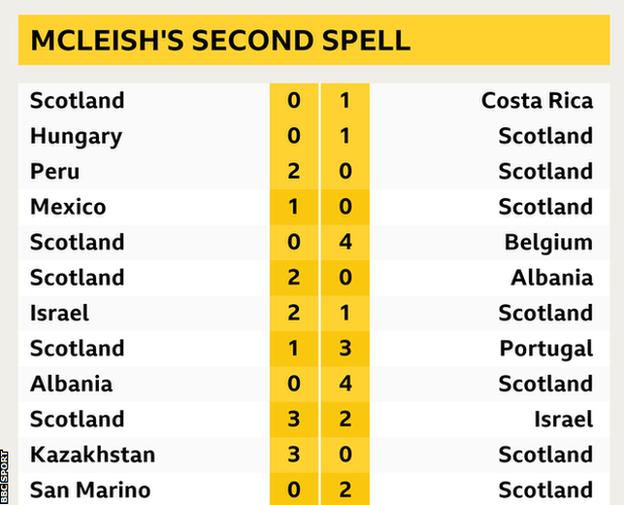