Manchester City's quadruple hopes are over - the danger now is that their season could fall apart.

This is a defining week for them. Tottenham are back at Etihad Stadium on Saturday (12:30 BST kick-off), before Pep Guardiola's side go to Old Trafford for the Manchester derby on Wednesday (20:00).

The Champions League is gone but the Premier League title is on the line now, and nothing less than two wins will do. City cannot rely on Liverpool dropping points in their remaining matches. 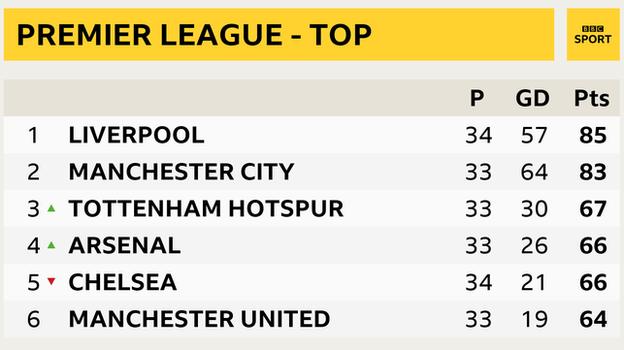 Guardiola's problem is that he has to find a way of picking his players up off the floor after the incredible drama of their European exit to Spurs.

He looked shattered and devastated himself at the final whistle, and understandably so. Right from the start, the action was absolutely relentless - and that continued for the entire 96 minutes.

I was there for BBC Radio 5 Live and it was that good to watch that there was no time to breathe. It is difficult to think of a better game I have seen, and as a spectacle it was just staggering.

City put so much energy into trying to get through - and to lose when you think you have won, in the way they did when their injury-time goal was wiped out by VAR, is especially cruel. It will be hard for everyone at the club to come to terms with.

They gave everything, but they have no time to feel sorry for themselves because there is still so much to play for.

City have still got six games left this season, and if they win them all, finishing against Watford at Wembley, they will win the Premier League and FA Cup and complete a domestic treble.

That would be an unbelievable achievement and I am sure Guardiola's message to his players will be along those lines. One trophy has gone but there are still two more to go - let's go for the hat-trick.

Spurs will be running on pure adrenaline

I have a gut feeling City will beat Spurs on Saturday, but everything about the game is going to feel very different.

There was a sensational atmosphere at the Etihad on Wednesday night. Guardiola asked for the fans to show him they cared about the Champions League, and they certainly did that.

It will just not be possible for their supporters to create the same sort of intensity inside the stadium on a Saturday lunchtime, but the City fans still have a big part to play.

They did their bit to help City go after Spurs in midweek, and they can lift the players again. They have to try because, if things feel flat at all, that will only help the visitors.

The Tottenham team will also have some tired bodies in it, but the difference is they are returning to the scene of a famous victory.

They lost on the night but still got the result they wanted and put in a brilliant performance to get it. As a player you just don't feel tired after results like that, and they will be full of confidence and running on pure adrenaline.

Of course Spurs had a little bit of luck along the way, but they withstood all the City pressure on Wednesday and thoroughly deserved their victory. Over the two legs, they were the better side.

City will have regrets from first leg too

City can take some positives from the way they played on Wednesday into the weekend, but they cannot afford any more stupid mistakes or missed opportunities if they are going to get the result they want this time.

When City look back on how the Champions League tie was lost, then defensively they clearly could have done a lot better at the Etihad.

Aymeric Laporte has hardly put a foot wrong all season but his mistakes cost City two goals, and Ederson should have done better with the first of them too.

When you have conceded three goals at home you probably don't deserve to go through - but they will have regrets from the first leg too.

I was surprised Pep did not pick a more attack-minded side but really the reason that night went wrong for them boils down to Sergio Aguero's missed penalty after 11 minutes.

Instead they had to wait until Aguero scored in the 59th minute of the second leg to lead on aggregate, and there were more twists and turns to come.

Spurs must cope without Son and Kane

Guardiola's Champions League hopes are over for another year and it is Tottenham who are through, with Ajax standing between them and a place in the final against either Barcelona or Liverpool in Madrid on 1 June.

Spurs will see their semi-final as winnable - but so will Ajax's exciting young team, who have already beaten Real Madrid and Juventus and are building a big reputation. I don't think anyone sees Ajax as an easy option any more.

It is a big blow to Spurs that they will be without the suspended Son Heung-min for the first leg at home, although their new stadium will again give them a huge boost.

Son was absolutely magnificent against City, and he always seems to step up when Harry Kane is absent. Spurs must find a way of coping without both of them next time, but they have already beaten the odds to get this far.

Mauricio Pochettino's side came so close to going out in the group stage. They were hanging on for dear life in their last game against Barcelona - now they could end up facing a rematch in the final.

There is no point thinking about that just yet, though. Barca are still my favourites to go all the way and win it, but Liverpool's attack will cause them problems and that tie is also very difficult to call.