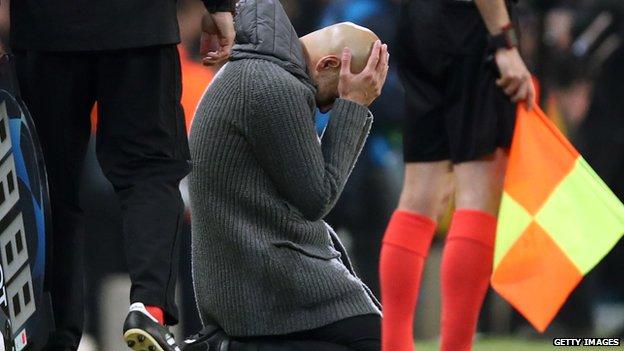 Manchester City boss Pep Guardiola called it "cruel"; Tottenham manager Mauricio Pochettino said "That is why we love football... anything can happen."

Both men lost their jackets in the bedlam of Raheem Sterling's disallowed injury-time goal - the Video Assistant Referee (VAR) ruling it out for offside and sending Spurs through to the Champions League semi-finals on the away goals rule.

Spurs players had been laid flat out on their back. The Etihad erupted. Guardiola had sprinted off down the touchline in celebration. Then he looked up at the big screen showing 'goal review', sank to his knees and put his head in his hands.

The stadium went silent. Then despair. Now the away end erupted.

Has there ever been a more dramatic end to a game of football? Was this a turning point for VAR in the mind of football fans?

What do you think about VAR?

Has that incredible finish to a remarkable game changed the way you feel about VAR?

Sixty seconds of an emotional rollercoaster - in pictures

Tell us what you think - add your comments to the debate below.