The Scottish FA has "cut off top-level managers" because of their treatment of Gordon Strachan and Alex McLeish, says former Scotland winger Pat Nevin.

McLeish was relieved of his duties as Scotland boss on Thursday after losing seven of his 12 matches in charge.

His predecessor Strachan left his post in 2017 on the back of just coming up short in two qualification campaigns.

"You can keep changing managers until your heart's content, it's not going to fix it," Nevin told BBC Scotland.

"If you are a top-level manager and you know what Scotland do - get beaten because they don't have enough good players then blame the manager - you'd just think why would you bother? You can't bribe them with millions of pounds.

"They now find themselves in a position where you have actually cut off a lot of the people you've been capable of getting."

Scotland last qualified for a major tournament in 1998 and have reached just two play-offs since, losing to England and the Netherlands in 1999 and 2003 respectively.

After taking over from Strachan - who left as Scotland missed out on a World Cup play-off on goal difference after a 2-2 draw in Slovenia - McLeish's Scotland laboured into a Nations League play-off and a faltering start to European qualifying.

"You get rid of Gordon Strachan who is probably the best in the business. So anyone you get after that will probably be secondary," said Nevin.

"If you get Steve Clarke, you'll be all right, don't know about David Moyes - the fans would probably turn on him quite quickly but he's a good manager as well.

"But you should give the managers time. And when they do a job, you ask if they could have done better with what they have. If the answer is no, it doesn't matter if you qualify or not." 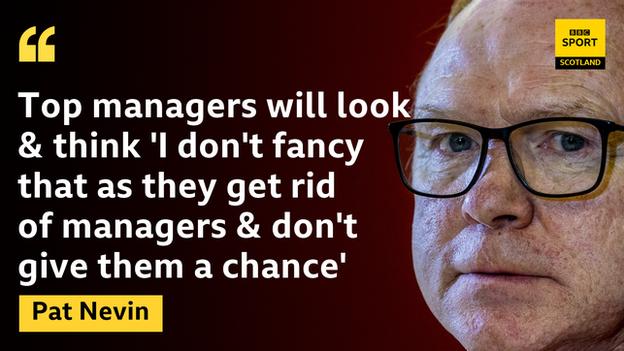