Steve Clarke says nobody from the Scottish FA has been in touch regarding the vacant Scotland manager's job and he remains fully focused on Kilmarnock.

The 55-year-old is among the favourites with bookmakers to take over from Alex McLeish, who was sacked on Thursday.

Clarke said he would be interested in international management "at some stage", but refused to be drawn on the vacancy, saying: "I don't speculate."

Scotland face Cyprus and Belgium in Euro 2020 qualifying in June.

Asked if he would be open to taking the job on an interim basis for those games, Clarke, who is under contract until 2020, said he was planning to go on holiday.

There was the hint of a mischievous glint in the eye as Clarke walked into the media room at Kilmarnock. He knew what was coming.

As he always does, he went around the whole room and shook every person there by the hand before the feeding frenzy began. A gesture of respect and an indicator of the sort of person he is. It was then straight into questions about the Scotland job. He had clearly prepared the stance he would take, and he stuck to his line - but there was no absolute ruling it out.

And there were interesting glimpses here and there. Yes, he would be interested in international management at some stage. But he also pointed out that the Scottish FA hadn't got in touch last time round, so why should they this time. All of it done in a respectful, jovial tone.

By the end, talk had turned to the hypothetical situation of taking the Scotland reins for the internationals at the end of the season. His reply was that holidays were the focus and his wife wouldn't be too happy about changing plans. Along the way he scotched rumours he was off to Fulham at the end of the season - 'lazy journalism'.

He could have corked the Scotland speculation by ruling it out completely. But he didn't. 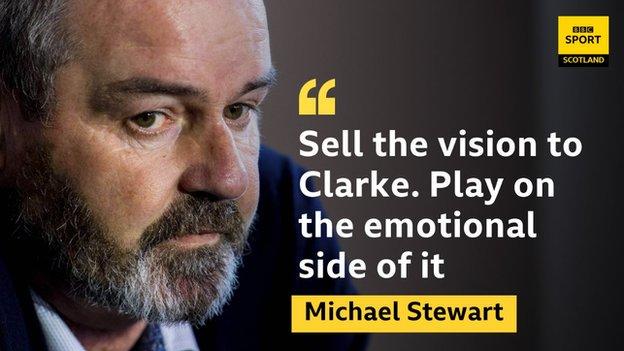 McLeish, in his second spell as national coach, left after a poor start to the current qualifying campaign and former Scotland midfielder Michael Stewart believes Clarke is the outstanding candidate.

Former Scotland and Chelsea full-back Clarke has been at Rugby Park since October 2017, steering Kilmarnock away from relegation worries to fifth place in his first season.

The Ayrshire side currently sit third in the Scottish Premiership, on course for European qualification for the first time since 2001.

He has been linked with a summer move to Fulham and recently spoke of feeling "unfulfilled in England" after spells in charge at West Bromwich Albion and Reading.

"You can't look further than Steve Clarke," Stewart told BBC Sportsound. "He has done an unbelievable job at Kilmarnock.

"I know there's chat of Fulham being interested, but the national team is an attractive job and I think if you put a contract in front of him he'd take it.

"You can play on the emotional side of it and say, 'if you are the man who takes Scotland to the Euros you will be a legend'.

"Leading Fulham back to the Premier League is not the same as being a legendary Scotland manager. Sell the vision to him. If he's successful with Scotland, he'll get a better job than Fulham."

Can you name the previous 10 Scotland bosses before Steve Clarke?