What makes a good Scotland manager? The question should be on the minds of the Scottish FA board over the holiday weekend as they ruminate on who should replace Alex McLeish.

The likes of chief executive Ian Maxwell, president Alan McRae, vice-president Rod Petrie, will be "sounding out" the availability of prospective candidates during the next few days and pondering whether to make an interim appointment or immediately identify a permanent successor.

With the squad for the Euro 2020 qualifiers against Cyprus and Belgium due to be announced in the week of 27 May, a placeholder coach seems the most likely option, with the likes of performance director Malky Mackay and under-21 coach Scot Gemmill both already on the payroll.

But what skill set must a Scotland manager have? BBC Scotland has asked several former internationals and drawn up this job specification...

Make the most of what is available

Captain Andrew Robertson and midfielder Scott McTominay have both played in the knockout stages of this season's Champions League and are performing at the top end of the English Premier League. Midfielders Stuart Armstrong, Ryan Fraser and Callum Paterson are regularly involved further down that division.

Scott Bain, Craig Gordon, Kieran Tierney, Callum McGregor, Ryan Christie, Oliver Burke and James Forrest are part of a Celtic squad on the brink of a treble treble. Then there are the likes of Robert Snodgrass, Matt Ritchie, James McArthur and Tom Cairney - 124 appearances between them in the English top flight this season - but absent from recent squads for a variety of reasons.

So the raw materials are there for a new man to work with - they just have enough nous and knowledge to understand the strengths of players at their disposal.

"We've got a good group," former Scotland striker Kenny Miller says. "I just think they need a little bit of help. In the last two games against Kazakhstan and San Marino, they looked a little bit devoid of any real idea of what we're trying to do. If everyone was available, we'd have had decisions to make about who to pick."

Establish a way of playing

Scotland have a surfeit of midfielders, a range of effective wide players, and two top-level left-backs. But they lack experienced goalkeepers, an established right-back, centre-backs with the requisite nous at international level, and a reliable source of goals. McLeish's successor needs to first recognise that, then develop a strategy to accommodate it.

"The best campaign I can remember was under Walter Smith," says former Scotland centre-back Gary Caldwell. "We had a way of playing that suited the players we had and an identity, whether you think the tactics were right or wrong. We were hard to beat, defensively minded and a threat on the counter and it worked."

Former national team winger Pat Nevin, who earned his 28 caps under Sir Alex Ferguson, Andy Roxburgh, and Craig Brown, says McLeish's predecessor Gordon Strachan understood that more than most. "It's about being a good manager, but Gordon's systems seemed to work most of the time." 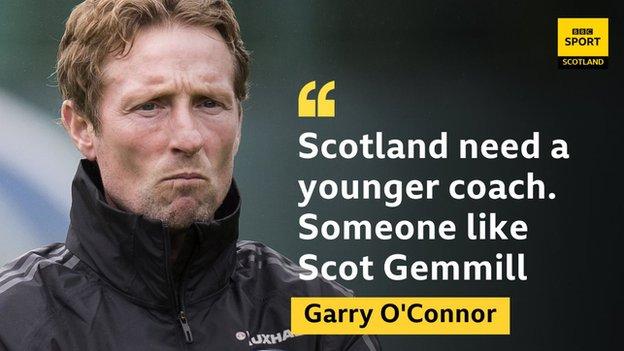 "Football has changed massively," says Garry O'Connor, who last appearance in a 16-cap national career came in 2009. "You need to be able to get your message over to the players."

A huge part of that is understanding not just the personalities, but also the environment in which the modern footballer operates. In short, how does a national team coach motivate millionaires? And how do they meet the demands of those used to playing for clubs where the best of the best is provided?

Miller says that elite footballers now - even more so than during his international career - want forensic detail. They want to be told what to do. When to do it. And why. That runs from tactics, to sports science, even to how to carry themselves as ambassadors for the nation.

"Scotland need a younger coach who can work with the players who have come through recently," added O'Connor. "Someone like Scot Gemmill, who has been there with the age groups coming through, seems the perfect candidate to get that message across and the best out of these players."

Lead the players, not the nation

A Scotland manager first has to communicate his ideas to players, then to the Tartan Army, then to the media. And he must do so in that order.

The start point for that is having the respect of those in his command, because if the national team are getting favourable results, the fans and the media will be content. "Walter Smith was brilliant at that," Caldwell says. "When he first took over, he took us away to Manchester for three or four days together and spoke for two hours. It was one of the best team talks I'd ever heard.

"He spoke about everything from turning up, from training, to dealing with the media, to how we should behave, how we should play, when he'd pick the team. He said that if anyone didn't buy into it, or think they could do it, they should chap on his door and let him know. Only one player said he couldn't commit."

So the ideal candidate need not necessarily be a salesman - an Ally MacLeod type - who will rally the nation through bold proclamations. Quieter candidates, such as Gemmill and Steve Clarke, can lead through getting the players to understand what they want and enact their instructions, rather than playing to the gallery.

With the balance of McLeish's contract needing to be honoured, and the lack of major tournament football leaving a hole in the Scottish FA accounts, the scope of prospective candidates narrows.

Given how disenchanted the Tartan Army have grown in recent weeks, there were genuine concerns over how small a crowd might be attracted to Hampden for the qualifier against Cyprus on 8 June. At a rough estimate, every 10,000 off the attendance costs the Scottish FA somewhere in the region of £250,000 - money the association cannot afford to miss out on.

That is not to say there is not a budget to recruit a new manager. The reported £400,000 McLeish was being paid annually is significantly more than almost any domestic candidate is currently earning, albeit compensation would be needed to secure the likes of Clarke or Derek McInnes.

But before committing that cash, it seems more likely that the Scottish FA would sit tight until after the game in Belgium on 11 June - a scenario which may also suit several candidates, given the damaged the the world's number one ranked side could wreak in Brussels.

Can you name the previous 10 Scotland bosses before Steve Clarke?