Manchester City boss Pep Guardiola says Premier League title rivals Liverpool are "one of the best teams I have seen in my life".

City are one point above the Reds after beating Tottenham 1-0 on Saturday.

Both teams have four games remaining, with Liverpool having the chance to return to the top of the table when they visit relegation-threatened Cardiff City on Sunday (16:30 BST).

"The title is still in our hands," said Guardiola.

"Every day with this club and these players - it doesn't matter what happens next - we'll fight until the end," Guardiola told Match of the Day.

"We'll see how far we get. We are fighting with the best Liverpool ever, one of the best teams I've seen in my life." 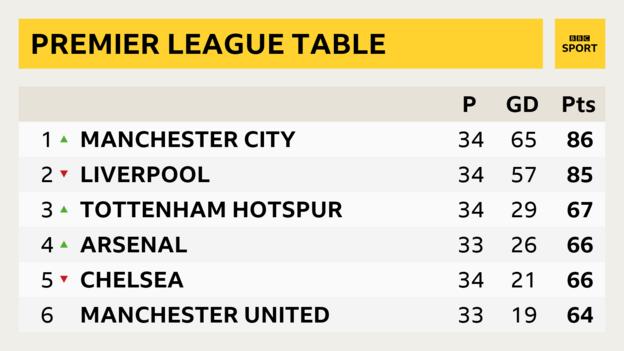 Guardiola's side travel for a derby at Manchester United on Wednesday, before visiting Burnley, hosting Leicester and finishing their league season at Brighton.

After Sunday's trip to Cardiff, Liverpool host relegated Huddersfield and go to Newcastle, before welcoming Wolves to Anfield on the final day.

However, Jurgen Klopp's team also have a Champions League semi-final against Barcelona to prepare for during their run-in.

"It was very important for the race for the Premier League. We know we cannot drop points," added Guardiola, whose side were knocked out of Europe by Spurs on Wednesday.

"It was tight. Tottenham had more chances than the previous two games.

"We have been playing for the Premier League every three days for 10 months. You can feel the pressure.

"We could have lost the Premier League today - after Wednesday it was really tough. As a footballer, I could not have done what my players have done today."