Celtic stand on the brink of their eighth successive title, but which Scottish Premiership team has collected most points in 2019?

When BBC Scotland asked the same question of 2018 in December, Kilmarnock topped the pile with 74 points from 32 games, albeit having played two matches more than Celtic, who had one point fewer.

Neil Lennon's men can edge closer to the title with victory at Hibernian on Sunday, after Rangers' win at Hearts on Saturday delayed their Old Firm rivals' triumph.

But how do they shape up in the form guide this year? 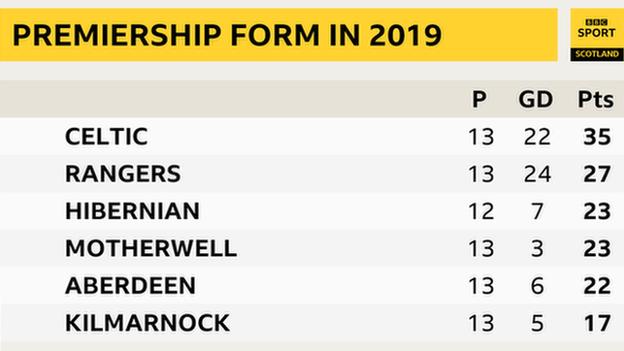 Celtic went into the new year on a low, having lost to Rangers for the first time in 13 meetings. That 1-0 defeat at Ibrox on 29 December kept the Parkhead club, who had a game in hand, above Rangers only on goal difference.

Since then, however, they have motored clear - they sit eight points above Rangers before Sunday's game in hand at Hibs - with a superb run.

Celtic have taken 35 points from a possible 39 in 2019. Goalless draws at home to Aberdeen and Livingston are the only blemishes. They have not been prolific, averaging just short of two goals per game, but their defensive record of three goals conceded in 13 games is six fewer than Rangers.

The Ibrox men are next in the form table, but two defeats and three draws in 13 games since the turn of the year have left them trailing. Rangers are the highest scorers in 2019, with their tally of 33 goals eight better than Celtic.

And Hearts are the only top-six side who sit in the bottom half of the form table for 2019. Their haul of 14 points from 13 games is the seventh highest in the division. 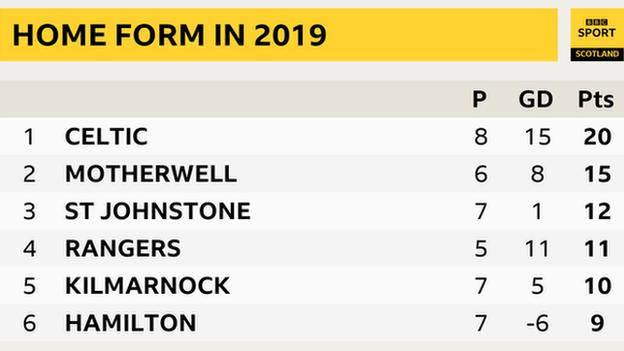 Motherwell failed to secure a top-six finish, but are matching Celtic as the best-performing home team in 2019.

Celtic have taken 20 points from eight matches at home - an 83% success rate.

Motherwell have played two matches fewer at Fir Park, but their record of five wins and a defeat gives them the same 83% points to games ratio. 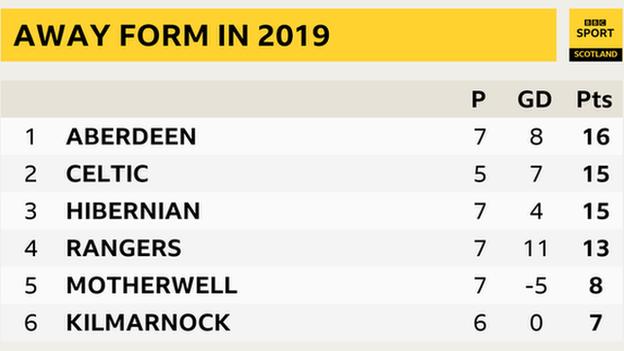 Aberdeen's win at Kilmarnock on Saturday puts them top of the away form league table with 16 points from seven games, although Celtic have a perfect road record of 15 points from five matches.

Hibernian's revival under Paul Heckingbottom - they remain unbeaten after eight league games since he took charge - has made them a force away from home.

They have won all four away matches under the Yorkshireman, including a memorable Edinburgh derby success against Hearts.