Jordi Alba once again showed his potency in attack by scoring the winner against Real Sociedad as Barcelona closed in on the La Liga title.

The Spanish full-back found the net with a brilliant low strike only two minutes after Juanmi had equalised for the visitors.

Clement Lenglet, another Barcelona defender, gave Barca a first-half lead with his header from a corner.

Sociedad's Gero Rulli made an excellent one-handed save to deny Luis Suarez.

It certainly was not vintage Barcelona as, time and time again, they looked susceptible to any ball played between their centre-backs - any repeat display against Champions League semi-final opponents Liverpool will likely be severely punished.

One of those Sociedad through-balls should have resulted in the opening goal on Saturday. Ruben Pardo, who was excellent throughout, played a delightful dinked pass into the area for Juanmi whose shot was saved by Marc-Andre ter Stegen before Willian Jose, inexplicably, fired over from about six yards.

That spurred Barca into action. Suarez first forced Rulli into making a brilliant stop, but moments later the Sociedad keeper had little chance of keeping out Lenglet's header which was powered in from an Ousmane Dembele corner.

Sociedad were level shortly after the hour mark. Former Newcastle midfielder Mikel Merino, who revelled in his 'quarterback' role, fed a great pass through to ex-Southampton striker Juanmi, who poked in.

The visitors' celebrations were short-lived though as Alba, who cut in from the left, launched a crisp low drive which flew beyond the reach of Rulli. The Barca player has now been involved in more goals than any other La Liga defender in this season (two goals and eight assists). 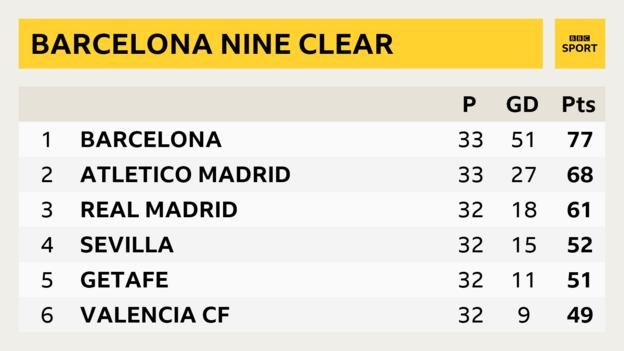