Cristiano Ronaldo says he will be staying at Juventus "1,000%" after the club won an eighth consecutive Serie A title with victory over Fiorentina.

Massimiliano Allegri's side, who failed at the first attempt with a 2-1 loss at SPAL last week, fell behind after a Nikola Milenkovic opener.

Alex Sandro equalised with a brilliant flicked header in the 37th minute.

Victory was sealed after the break when German Pezzella diverted Ronaldo's cross into his own net.

"I'm really happy that I have won the Italian title in my first season," said Ronaldo.

"Of course, it did not go well in the Champions League, but there is next year." 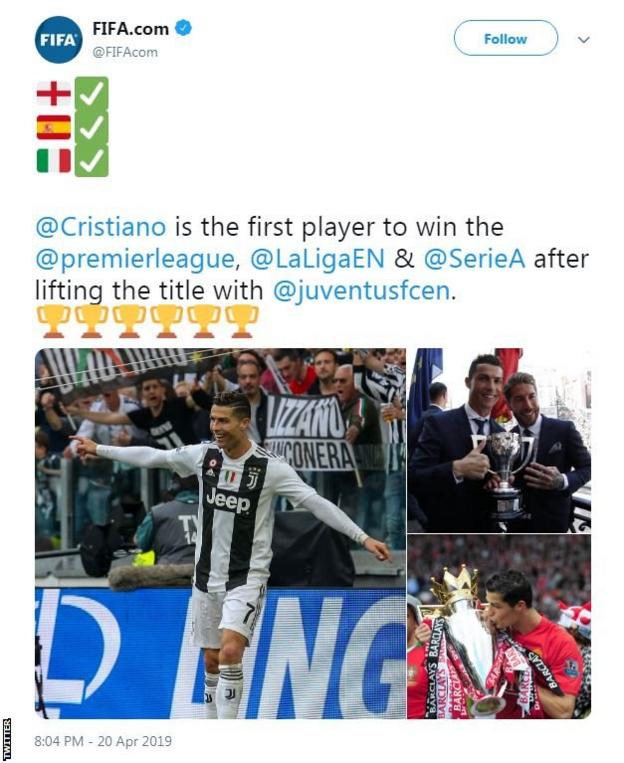 The Old Lady - as they are commonly known - were knocked out of the Champions League by Ajax in midweek and have won every Italian league title since moving to the Allianz Stadium in 2011.

AC Milan held on to fourth spot in Serie A, which would guarantee them Champions League football at the end of the season, after they drew 1-1 against Parma in the opening game of the day.

Roma could have leapfrogged Milan by beating third-place Inter later, but had to settle for a point after Ivan Perisic's second-half header cancelled out Stephan El Shaarawy's stunning 14th minute strike.

Napoli, who play Atalanta on Monday, are second with 67 points with Inter on 61. Milan are fourth with 56, one ahead of Roma.