Manager Paul Heckingbottom is "a little bit in love" with his Hibernian players after extending his unbeaten league run at home to Celtic.

A goalless draw at Easter Road means the Edinburgh side are yet to lose in nine Premiership outings under the former Barnsley and Leeds boss.

"There were spells where we really displayed what we want to be about going forward," said Heckingbottom.

"Credit to them, I asked the players to do a few more different things today. At the minute, I'm a little bit in love with them and what they're doing.

"They are performing really well, giving everything. That's all the fans want."

When Heckingbottom arrived to replace Neil Lennon in February, Hibs were eighth in the table and 11 points behind city rivals Hearts. Hibs go into next weekend's home derby three points in front of the visitors.

Hibs created good early openings against Celtic, while Oli Shaw was denied in the closing stages by a close-range Scott Bain block.

However, Heckingbottom needed his goalkeeper to be on top form, with Ofir Marciano making four good stops, two of them coming in time added on.

"The big save for me was the one where he stayed big and got a strong hand to it," said the manager of the effort to keep out a stinging shot from Odsonne Edouard.

"He was excellent today and so were the back four in front of him and the front six were first class out of possession.

"Being greedy, I wanted to win the game but we needed to score when we were on top in the first half." 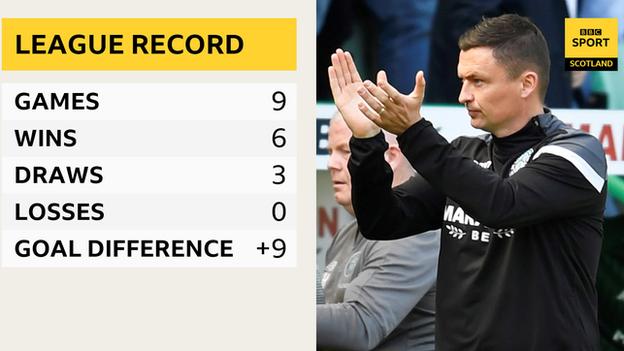