With six weeks to go until the Women's World Cup in France, BBC Sport looks at the international players who are impressing on the domestic stage.

The tournament starts on 7 June in Paris, with home nations England and Scotland facing each other in their opening group game on Sunday, 9 June.

You can watch live coverage across BBC TV, radio and online.

Can Miedema free-score for the Dutch?

The Netherlands have never made it past the last 16 at the World Cup, but the Euro 2017 hosts and champions have in-form players making an impact on English soil.

On Sunday, striker Vivianne Miedema notched her 30th goal in all competitions as Arsenal beat Everton to move to within one win of the Women's Super League title.

The 24-year-old has scored 21 in the league - smashing the previous record of 15 in a single season - and appears on course to win the golden boot.

Her Netherlands team-mate Danique Kerkdijk was also on the scoresheet for Bristol City in the WSL, scoring with a looping ball from the halfway line as her side lost 5-2 against Liverpool. 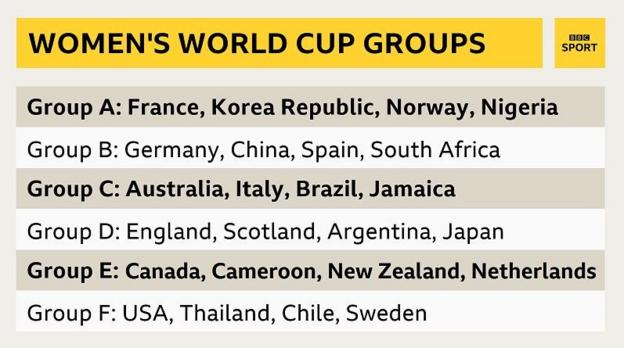 Erin Cuthbert is one of Scotland's poster girls and, like Arsenal's Meidema, has been named on the PFA player of the year shortlist.

The midfielder showed her worth on Sunday with an important Champions League goal for Chelsea.

The Blues lost the semi-final first leg 2-1 against holders Lyon but Cuthbert's second-half volley gives her side a much-needed away goal for the second leg at Kingsmeadow next Sunday.

Meanwhile, the Chelsea team selection may have thrown up a conundrum for England manager Phil Neville.

Carly Telford was left out for the game against Lyon, and was also dropped for the FA Cup semi-final the week before, which Chelsea lost against Manchester City.

The Lionesses boss has chosen to rotate his goalkeepers in the lead up to this summer's tournament, with Telford starting three of the last five games.

Will her lack of consistency influence Neville's decision?

When you score a hat-trick but still don't win…

Canada's all-time top scorer Christine Sinclair has already been to four World Cups - and she's proving she's still got it as she looks to add France 2019 to her list.

On Saturday, she scored a hat-trick for Portland Thorns against Chicago Red Stars, as the two sides remarkably drew 4-4.

Australia captain and Red Stars striker Sam Kerr was also on the scoresheet in the National Women's Soccer League match.

Journalist Rich Laverty summed up Sinclair in his Tweet: