There might be a strange atmosphere at Old Trafford on Wednesday because some Manchester United fans do not want their side to beat Manchester City and put arch-rivals Liverpool in control of the Premier League title race.

But there is no way that will affect the outlook of the United players, who have a point to prove after their pathetic display against Everton on Sunday.

The good news for Liverpool is that United will be more dangerous because of their own situation, and I also don't believe they can be as bad again as they were at the weekend. 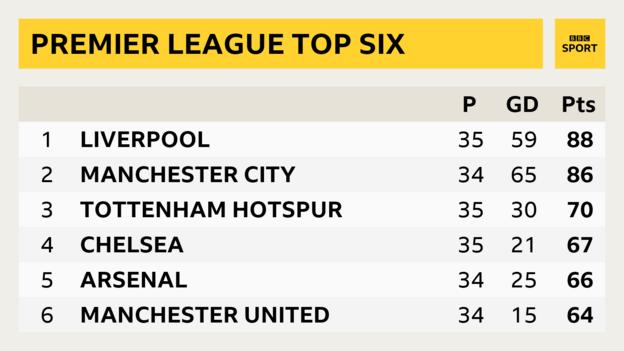 While City are chasing the Premier League title, United are after a top-four place and, despite their embarrassing performance at Goodison Park, other results have let them off the hook.

They could have been out of contention for the Champions League places by now, if Tottenham, Arsenal or Chelsea had been able to capitalise fully, but none of them won at the weekend. Even though Spurs beat Brighton on Tuesday, fourth place is still within United's grasp.

The other incentive for United's players on Wednesday is that they can rectify the desperate position they put themselves in with their lack of effort against Everton.

By their own players' admission, they did not try hard enough - Paul Pogba described their performance as "disrespectful" - and the way they surrendered was humiliating.

Anyone can be beaten, but being beaten without trying is not acceptable whoever you play for, let alone one of the biggest clubs in the world.

They need to show a reaction and demonstrate they do care. As United boss Ole Gunnar Solskjaer has said, this is the perfect game to do it in - and a victory would show what they are made of in front of their own fans.

'No reason for City to fear Old Trafford'

In the past, Old Trafford would have been my last pick as a stadium to go if you needed a result but City manager Pep Guardiola is right when he says it is not as scary any more.

Even United's own fans will tell you they are not the team they were, so it is not as if City are going into the lion's den.

Guardiola has triumphed on both of his previous visits in the Premier League, and City have won five of their past seven top-flight games there, going back to their famous 6-1 victory in 2011.

They know it will be tough, but they have got used to going to these places, and getting results.

If you look at both teams' recent form, there is no contest - City have won 25 of their past 27 games in all competitions, while United have lost six of their past eight and are on their worst run since 1988-89.

So, City are rightly huge favourites but I don't think that has much bearing on a game like this, and it is certainly not going to be easy for them.

If you want some evidence of how United's players can raise their game on big occasions, look at their amazing comeback under Jose Mourinho in the Manchester derby in April last year.

City needed a win to seal the title and looked well on their way when they were 2-0 up at half-time after a typically dominant display, but led by Pogba, United defied logic and hit back to win.

It could be that sort of night again on Wednesday where something really spectacular happens, because both sides are in a situation where only a victory will do - even if some United fans will be happy with a defeat.

'United will not care who wins the title'

I know what it is like to play in front of fans who are desperate for their team to lose because of what it means for their rivals - only on that occasion it was the Liverpool supporters who did not want to give United a helping hand.

On the final day of the 1994-95 season, my Blackburn team went to Anfield, knowing a win would give us the title but anything else would let Manchester United nick it by beating West Ham.

It was clear from the moment we arrived at the stadium that the Liverpool fans did not want United to be champions but the Reds players still knew they had a job to do - and they did it, despite pretty much everyone else in the ground being on our side.

When Jamie Redknapp scored a brilliant long-range free-kick in injury time to put Liverpool 2-1 up, it was greeted by near silence.

In the end our defeat didn't make any difference because we quickly found out that United had only drawn their game. The Liverpool fans joined in our celebrations at the final whistle, but I know how gutted they would have been if that result had given United the title.

It will be the same sort of situation on Wednesday, on and off the pitch. Whatever the feeling is in the stands, the United players will not care whether Liverpool or City go on to be champions.

As professionals they will want to win every game they play, and they will be focused on getting a result for themselves because they have got plenty to play for too.

'I can understand why Milner cannot bear to watch'

There is so much riding on Wednesday's game, it should be a fantastic occasion. The whole country will be watching - apart from some of the Liverpool players.

Reds midfielder James Milner has already said he will be supporting United for the first time in his life, but will not be following what is happening. I don't blame him.

I was the same in that 1994-95 title race, when it got to the stage where I could not watch United's games on the TV if they were playing and we weren't.

Listening to their games on the radio was even worse, because every time the commentator raised his voice, I thought United were about to score.

I used to switch off, and find some jobs to do around the house or have a long soak in the bath instead.

I think we know the way City and United are going to play, which will probably not make it any easier for Liverpool fans who are watching.

City will have a lot of the ball in the United half, while Solskjaer will set up his side to play with pace on the counter attack, or try to hurt them from set pieces.

At the moment, that is the only thing United can do in a game like this, because I don't think they have the players to look to dominate possession.

Playing on the break worked for Tottenham in their epic Champions League tie at Etihad Stadium last week, and it could work for United too.

They have had some very good results playing that way under Solskjaer, but it goes without saying that they will need to show a lot more desire and be much better organised than they were against Everton.

I think we will see a different United but I am still not sure they will be good enough. It is going to be a thrilling game with a brilliant atmosphere and if both teams play to the level they can do, then City will win.

They have to if they want to retain the title because, looking at the games Liverpool have got left, I do not see them dropping any points.