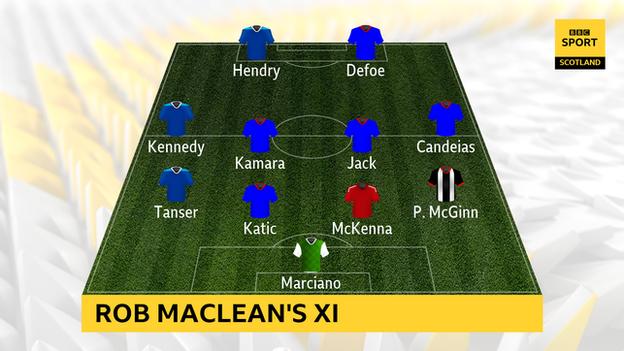 The Scottish Premiership returned at the weekend with all 12 teams in action.

Goalscorers Jermain Defoe, Scott McKenna and Callum Hendry are in, but who else features in BBC commentator Rob Maclean's team of the week?

St Mirren were trailing 1-0 to 10-man Livingston on Saturday for only six minutes when right-back Paul McGinn worked a one-two and squeezed in a crucial equaliser. It was a big moment in the match, the Buddies went on to win 3-1 and McGinn typifies the fighting spirit they'll need to reproduce if they're to avoid the relegation play-off place.

There were precious few football moments to remember in Aberdeen's 1-0 weekend win at Kilmarnock. Three hotly-debated red cards and Steven McLean's refereeing grabbed the headlines. When football did break out, Scott McKenna won the match with a thumping header and defended impressively as well.

Rangers look like finishing the season with the central defensive pairing that kicked off the campaign. Nikola Katic is back in favour as Connor Goldson's partner at the back. The 22-year-old Croat is a defender who likes to defend. He also scored the goal at Tynecastle on Saturday which sealed the 3-1 defeat of Hearts.

It's unfortunate for seemingly-doomed Dundee that Scott Tanser only scores against the Dark Blues. The left-back netted his first goal for St Johnstone inside the opening minute at Dens Park in December. That was a cross which went in off the inside of the post. His second goal for the Perth team was a lovely left-footer on Saturday from a 25-yard free-kick.

Daniel Candeias added another couple of assists to his already impressive total in Rangers' comprehensive defeat of Hearts in Gorgie on Saturday. He created the second and third goals and was perpetual motion throughout. The Portuguese winger never fails to deliver a totally committed and energetic performance.

The £50,000 Rangers paid Dundee to hasten the arrival of Glen Kamara has to go down as an incredible bit of business. The Finland international midfielder has slotted seamlessly into the side, given them an extra dimension and was again hugely impressive in the middle of the park at Tynecastle as Steven Gerrard's team ran the show.

I could easily have transplanted the entire Rangers midfield into my team from this weekend but there's no room for Steven Davis this time around. Team-mate Ryan Jack gets the nod. He started and finished the move for the second goal of the game against Hearts and that summed up his controlling influence in the match.

St Johnstone winger Matty Kennedy tormented Dundee all day long in the Tayside derby. His electric display at McDiarmid Park on Saturday included a steady stream of well directed crosses and a few shots at goal which, on another day, would have given him the goal his performance richly deserved.

With top scorer Alfredo Morelos suspended, Jermain Defoe has lapped up the chance to be the focal point in attack for Rangers. The opening goal against Hearts on Saturday, his seventh in Scottish football, was trademark Defoe. And his experience and expertise gets the best out of the players around him.

St Johnstone bounced back from a low-key showing at Kilmarnock to dismantle Dundee at the weekend and 21-year-old attacker Callum Hendry was one big reason, along with Kennedy, for the totally transformed performance. He scored the goal which sealed the points for the Perth team and his all-action contribution could have brought him more reward.