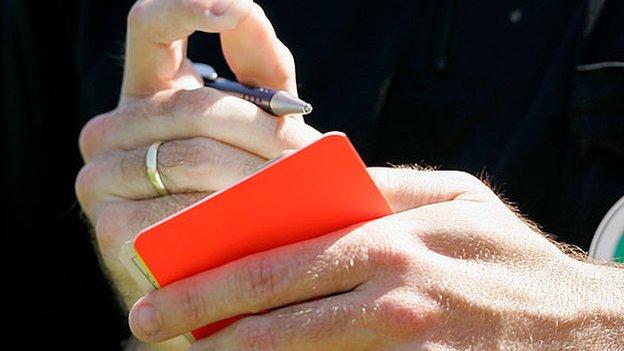 Police are investigating after a referee was forced to abandon a match in the Republic of Ireland after allegedly being wrestled to the ground.

Sunday's amateur game in County Wexford was called off during the second half with visitors Gorey Celtic winning 5-0 at The Ballagh United.

"It's alleged that a man in his 50s was assaulted by a player while refereeing a match," said a police spokesman.

Irish referee Daniel Sweeney suffered a broken jaw in an attack in November.

The latest incident happened as the sides played in an end-of-season match refereed by Michael Comiskey in division four of the Wexford League.

"A complaint of minor assault was reported to Gardaí following a soccer match at the Ballagh, Enniscorthy," said a police spokesman.

"The injured party did not require medical attention. Enquires are ongoing."

John Lavery, secretary of Gorey Celtic, said the player involved was not from his club, while the home side declined to comment.

The Irish Soccer Referees' Society expressed its concern about assaults on officials in November after the attack on Sweeney in a car park following Mullingar Town's match at Horseleap in County Offaly.

"Without referees there is no game. We, as referees, should be viewed as a resource and in turn we should be given the protection and respect we deserve," said president Paul O'Brien.

Three Mullingar players were banned for 40 years each by the Combined Counties League over the incident.

Another ex-Mullingar player had his lifetime playing ban extended to include all football activities.