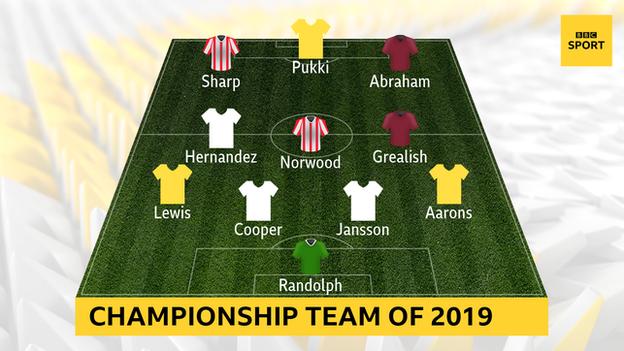 Leaders Norwich and third-placed Leeds United each have three players in the Professional Footballers' Association's Championship team of 2018-19.

Helped by 28 goals from Championship top-scorer Pukki, Norwich are on the verge of being promoted to the Premier League despite four successive draws.

They need just a point from their final two games to make absolutely sure.

Sheffield United - who have the equal-best defensive record in the division but do not have a defender in the PFA's team - are the Canaries' nearest challengers, three points adrift.

Back-to-back defeats have seen Leeds' chances of automatic promotion fade as they have a far inferior goal-difference and are three points behind the Blades.

Championship team of the year

Choose who makes your 2018-19 Championship team of the year - and then share it with your friends using our team selector.