France will host the Fifa Women's World Cup for the first time when the tournament kicks off on 7 June.

England and Scotland are among the 24 teams taking part with the final in Lyon on 7 July.

The tournament will be hosted in nine cities and played in nine different venues.

BBC Sport will have extensive coverage of every game across television, radio and online.

Here's everything you need to know about this summer's tournament.

What are the key dates?

The competition runs for a month, from 7 June until 7 July.

Hosts France get the competition under way with their opening group match against South Korea in Paris.

Scotland, who are making their first appearance at the World Cup, will meet England in Nice on 9 June in what is the opening game for both countries.

Holders the United States will begin the defence of their title against Thailand, who are ranked 29th in the world, on 11 June in Reims.

The semi-finals and final are being held in Lyon and will take place from 2 July.

How can you watch the games?

BBC Sport will have live coverage of every World Cup match across TV, radio, the Red Button and online from the group stages all the way through to the final.

The opening match between hosts France and South Korea on Friday, 7 June will be shown live on BBC One from Paris.

Home nations England and Scotland go head-to-head in their opening group match on Sunday, 9 June and you can watch that live on BBC One from Nice.

Last month, Fifa revealed that more than 720,000 tickets have already been sold for the tournament - exceeding the number sold at this stage for the World Cup in Canada in 2015.

The opening match, along with the semi-finals and final, were sold out within 48 hours of going on sale.

Where will the games be played?

There are nine venues in total, including the Parc des Princes - home of Paris St-Germain.

The opening match will take place there, while seven of the venues will host at least three group games.

The semi-finals and final will be held at the Parc Olympique Lyonnais, also know as Groupama Stadium. It has the largest capacity of the venues being used and will hold up to 59,186 fans.

The stadium, which hosted last year's Europa League final, will also be one of the venues for the 2024 Summer Olympics.

Defending champions the United States are seeking a fourth title and are ranked number one in the world.

Hosts France have never gone beyond the semi-finals of the World Cup and have only reached the last eight at the European Championship. However, they are ranked fourth in the world and are hoping to replicate the success of the men's team, who won in Russia last year.

Olympic champions Germany are also a threat. The side were knocked out in the semi-finals in 2015 - and in the quarter-finals of the European Championship in 2017 - but remain number two in the world.

World number seven Japan were World Cup winners in 2011 and runners-up in 2015, while European champions the Netherlands could also challenge for the title.

What are the home nations' chances? 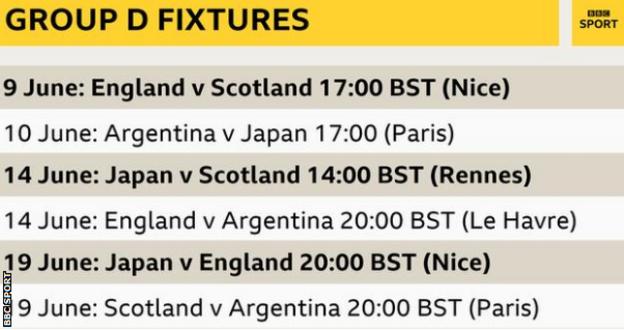 England, who won the SheBelieves Cup for the first time in March, are among the favourites having finished third at the World Cup in 2015.

They are ranked third in the world and beat Japan and Brazil in America earlier this year. They also drew with the United States but suffered a disappointing defeat to Canada in a friendly last month.

Manager Phil Neville said in March he believed this generation of players could go on to "dominate world football".

Scotland, who are ranked 20th in the world, are competing in their first World Cup but have gone four games unbeaten this year, including a memorable victory over Brazil in a friendly last month.

It was only the second time any Scottish team has beaten Brazil at any level, following a success for the men's under-20s at the 2017 Toulon Tournament.

Which players should you look out for?

Ballon d'Or winner Ada Hegerberg has not been included in Norway's squad for the World Cup but a few of her Lyon team-mates could be on show, including England's Lucy Bronze and the newly-signed Nikita Parris, plus Japan defender Saki Kumagai.

Manchester City's Steph Houghton could play a big role for England in defence, with Barcelona's Toni Duggan and Chelsea's Fran Kirby hoping to shine in attack.

Arsenal's Kim Little and Chelsea's Erin Cuthbert will be key attacking players for Scotland, while Manchester City's Caroline Weir is also one to watch.

The United States have a squad bursting with talent and experience with the likes of Alex Morgan and Megan Rapinoe. It is also expected to be 36-year-old Carli Lloyd's last tournament - the former Manchester City midfielder was Fifa World Player of the Year and the Golden Ball winner at the World Cup in 2015.

Australia captain and forward Sam Kerr guided her country to their first Cup of Nations in March, while PFA Player of the Year Vivianne Miedema is a leading figure for the Netherlands.

And Orlando Pride forward Marta, who won the Best Female Player Award in September, is the driving force behind an ageing Brazilian team.