Liverpool's bid for a first Premier League title and a first top-flight triumph in 29 years ended in failure despite a final-day victory over Wolves.

In the 'as it stands' table, the Reds were top for 21 first-half minutes, only for Manchester City to recover from falling behind at Brighton to record a convincing 4-1 victory.

Sadio Mane scored from close range after 17 minutes and again after 81 to join Liverpool team-mate Mohamed Salah and Arsenal's Pierre-Emerick Aubameyang as the Premier League's top scorer on 22 goals.

Liverpool keeper Alisson was confirmed as the Golden Glove winner with 21 clean sheets.

The victory was Liverpool's ninth in a row and their 30th overall in the league. They finished on 97 points, the third-highest top-flight total in English football history - behind City's title triumphs this season (98) and last season (100).

Smoke, songs and a sea of red

The arrival of the Liverpool team bus has become an event in itself.

Half an hour before it turned onto Anfield Road, thousands were on the street waiting for its arrival. Supporters in the hospitality areas at the top of the magnificent new main stand looked down onto a sea of red, numerous flares going off as Jurgen Klopp and his side turned slowly left and drove into the stadium, the smoke clogging the air in unison with the songs being belted out. 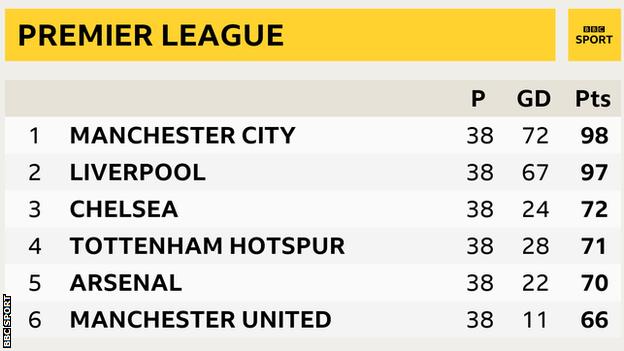 Many of those fans were either not alive, or old enough to remember the last time Liverpool were champions. The banner that was slowly handed across the lower tier of the Kenny Dalglish Stand before kick-off proclaiming '18 times' was a statement about the club's glorious past, before a game that might have ushered in a bright new future.

As the pre-match atmosphere grew and the teams went through their warm-ups, Klopp stood alone with his thoughts, knowing he had already delivered a season beyond any realistic expectation yet, incredibly, without being able to go into the final day as favourite.

Confusion in the crowds, controlled on the pitch

In his programme notes, Klopp pointed out "the job for all of us today is to make sure the focus stays here, on this game". Quite rightly, he pointed out, it was the only thing Liverpool had any control over.

To their absolute credit, Klopp and his players followed the plea completely.

In the stands though, it was chaos.

From kick-off, the volume was turned up a notch or two, the backing from the supporters to players hugely impressive, so much so that when Sadio Mane tapped home from six yards there was no noticeable change.

That didn't happen for about another eight minutes.

Who knows how these things get started but cheers were heard for a Brighton goal that hadn't actually been scored. Fans all over were desperately trying to find out what was going on. Anyone who has tried to get a signal at any major sporting event knows that is not straightforward.

Phones were refreshed and refreshed. The noise subsided. Nothing had happened. Then it did.

The celebration at Brighton's goal was more feverish than had been the case for Mane's. The sadness was that it was brought to an end quite so quickly. For 10 more minutes, Liverpool were still top. There was another ghost goal, another celebration. This time more muted. The optimism from before was disappearing. The belief starting to fade.

News City had gone in front came via the Wolves supporters, who taunted their hosts by telling them they would win nothing this season.

By the time Martin Atkinson blew his whistle for half-time, Matt Doherty had hit the bar for the visitors and the home fans had found their voice again. Anfield echoed to the strains of "Liverpool we love you".

And now for Europe

It did not feel like the league title was on the line in the second half.

Wolves, as they have done so often against the big six this season, gave ample evidence to show they are a very good team. Next season they may go beyond their seventh-placed finish, their best since 1980, with astute recruitment in the summer.

As the goals went in on the south coast, Diogo Jota brought a good save from Alisson with his close-range header before Mane converted Trent Alexander-Arnold's cross nine minutes from time.

Alex Oxlade-Chamberlain made only his second appearance of the season as a late substitute before the whistle blew on Liverpool's amazing domestic campaign.

Wolves will qualify for next season's Europa League if Manchester City complete the first ever domestic treble against Watford in the FA Cup final at Wembley next Saturday.

Liverpool will aim for their sixth European title when they play Tottenham in the Champions League final in Madrid on 1 June.

'We could not shake City off' - what the managers said

Liverpool manager Jurgen Klopp, speaking to Sky Sports: "I know people will find something and say a point here or three. We had lucky moments, City had lucky moments - against Burnley and us. But we scored a strange goal against Everton and a late one against Newcastle.

"It's not about outplaying everyone, it's about keeping believing and staying in the race. City found it difficult to get rid of us, and we couldn't get rid of them.

"Being second in the Premier League isn't what we wanted tonight but we'll take it. This is a first step, that's how we see it. The team who played the last couple of weeks were together last year apart from Alisson.

"We were 25 points off last season. If we do those same steps again that will be a season.

"I do my job. The boys deserve it 100%. Congratulations to Manchester City, they played a good season. They took 198 points in two seasons, not bad."

Wolves manager Nuno Espirito Santo: "We had a good game against a fantastic opponent. We started not so good but we had good chances.

"It's the end of the season. Until the last minute we showed total commitment and that's what I went. We had chances but weren't clinical. We knew we would be facing a tough opponent. The commitment, belief and ideas were there.

"We will try to improve and build a good team next season."

What have you got to do to win the title? The stats you may have missed