Manchester City boss Pep Guardiola admitted he was urging Vincent Kompany not to shoot as he lined up his brilliant winner against Leicester.

The City captain's long-range strike gave his side a 1-0 win, meaning they will retain their Premier League title if they beat Brighton on Sunday.

Belgian defender Kompany's goal was his first from outside the penalty area for City after 11 years with the club.

"I said, 'No shoot Vinnie, no shoot!'" said Guardiola.

And Kompany revealed the City boss had not been the only person doubting him before he let fly.

"I could hear people saying 'don't shoot, don't shoot!' But I've not come this far in my career to have young players tell me when to shoot," said Kompany.

Manchester City winger Raheem Sterling posted a picture of him on Twitter with a pained expression, with the caption: "My face screaming "NOOOO VINNY WHY U DO THIS" so hard. what a hit boi !!! Captain Incredible."

Meanwhile, Sergio Aguero could be heard telling Kompany after the final whistle: "I tell you, no shoot! No Vinnie, no!"

Kompany had not hit the target from outside the penalty area since 2013 but he has saved his goals for big moments.

He scored a vital goal against Manchester United in 2012 to turn the title race in City's favour, while his past three have come in last year's Carabao Cup final, the Manchester derby and then Monday's win against Leicester. 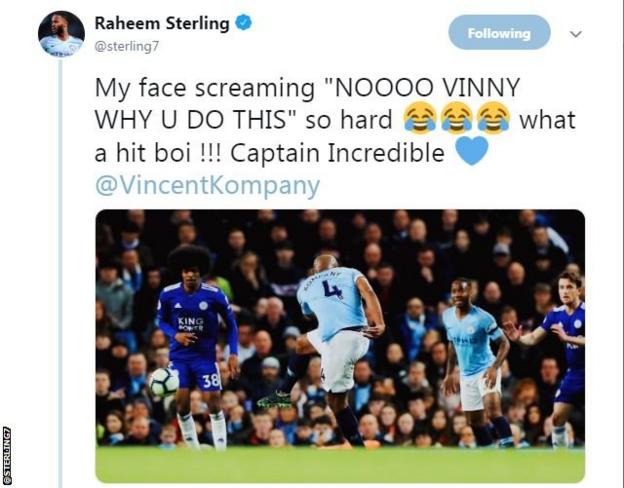 What next for Kompany?

Kompany has made 16 Premier League appearances this season and City have won 15 of those. He has started the past three games - against Manchester United, Burnley and Leicester.

Guardiola says he plans to speak to the defender about his future at the end of the season, with 33-year-old's contract set to expire.

"We are going to take a beer together and decide what is best, especially for the club," he said.

"He is an incredible human being and he helps me a lot. I always said I could not use him a lot, but this club is what it is because of people like Vincent.

"When he is fit he is an incredible centre-back. He is a real defender, he is a leader many times."

"Kompany is an important person for the club to keep around," he told BBC Radio 5 Live.

"He has the experience and knowledge of how to win league titles, and Man City aren't full of players with that.

"Hopefully they will sort something out."

Former Manchester United defender Gary Neville said Kompany is "outstanding" for the club both on and off the pitch.

"Kompany is a City hero, a giant at this club - has been for 10 years," he said on Sky Sports. "He's someone I think everyone looks up to and respects."

City had come closest to scoring before Kompany's winner, Sergio Aguero heading against the bar and being denied by a super Kasper Schmeichel save either side of the break.

"We controlled the game, we were much better than the opponents," added Guardiola. "Sometimes you need a goal like Vinnie today."

The result leaves City one point ahead of Liverpool with one game to play, and it also ended Leicester's hopes of finishing seventh and possibly taking a place in next season's Europa League.

"City and Liverpool are marvellous teams. It's exciting, it goes to the last game and there is still work to do for both teams."