Lyon striker Ada Hegerberg has been voted the BBC Women's Footballer of the Year 2019.

The award, voted for by fans across the world, comes four days after she scored a hat-trick in the Champions League final as her side lifted the trophy.

"It's a rollercoaster of feelings. It's amazing," she said of the BBC accolade.

The other nominees on the five-player shortlist for the BBC World Service award were Japan and Lyon defensive midfielder Saki Kumagai and Portland Thorns' USA midfielder Lindsey Horan.

Norwegian Hegerberg, 23, who also claimed the award in 2017, said: "It's an honour winning this for the second time.

"Saki is my room-mate. I know her qualities and what she's given to the club. She's also captain of Japan which speaks for itself.

"But also Sam and Pernille are players who are at the top of their game, along with Lindsey. Winning again is such a special feeling." 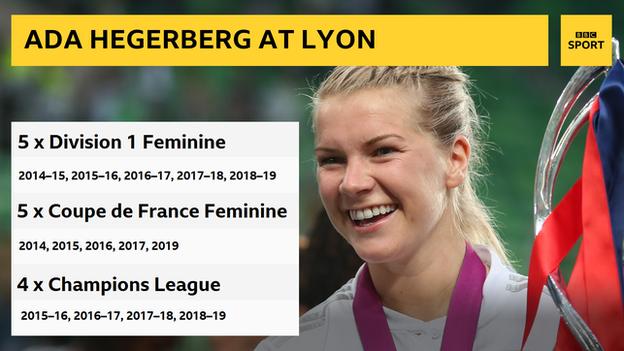 Hegerberg's public profile has risen in the past year, thanks in part to her being named the first recipient of the women's Ballon d'or.

And her goalscoring stats speak for themselves.

During the 2017-18 season, she netted 53 goals for Lyon in all competitions - including a record 15 in the Champions League - as the club lifted the Division 1 Feminine and European titles.

And this season she maintained her form with 29 goals in 33 games, as Lyon came home with the treble: the French league title, French cup and European trophy.

Although her 16-minute hat-trick in Saturday's final against Barcelona came after the voting for the BBC award closed, it capped a remarkable campaign.

She said: "Sometimes in my mind I think 'am I capable of doing that?' and some part of me goes 'absolutely, of course you are' and some part is like 'you're a lunatic, don't put yourself in a situation like that before you've been there'.

"But visualising it all leads up to moments like that."

In 2017, Hegerberg stepped away from Norway's national team because of her increased frustration over the state of the country's domestic and international system, in particular the lack of equality for young girls.

It means she will not be part of the Norway squad for this summer's World Cup in France.

"The situation has already got very messy. That's why I had to speak up a little bit," she said.

"It's all part of what the ambitions are for the women's game. I still think there's a lot of work to do.

"To continue to make this my career I had to make this my position. I'm still confident with it today, but I hope there will be some changes for that not to happen again obviously."