England face a favourable draw in the Women's World Cup last 16 after they beat 2011 winners Japan to finish top of Group D thanks to two Ellen White goals.

Lionesses boss Phil Neville seemingly took a gamble by making eight changes to the side that beat Argentina in the second group game.

But in White, who returned to the side, they have a finisher of real class as she scored her 30th and 31st England goals either side of the break from clever through balls.

England still stuttered playing out from the back against the 2015 finalists, who beat the Lionesses in the semi-finals four years ago.

Kumi Yokoyama's early 35-yard free-kick was tipped onto the bar by Karen Bardsley while Japan took control of midfield and peppered England's goal as Neville's side suffered a second-half dip.

But they could not find the decisive touch and finished second in the group to face the winners of Group E, which includes the Netherlands and Canada.

England will face a seemingly easier task - in the next round at least - as they travel to Valenciennes on Sunday to play a best third-placed team, which could be one of China, New Zealand, Cameroon, Chile or Thailand.

However, topping the group does leave England in the half of the draw containing hosts France and potentially the holders the USA.

England started their World Cup campaign well by winning their opening two games for the first time, yet there had been questions about their link play in attack with Fran Kirby starting in the number 10 position.

Georgia Stanway, who was making her first World Cup start, replaced the Chelsea forward but instantly looked at home by firing in two trademark shots, which were saved, before a clever through ball which allowed White to slot past Ayaka Yamashita.

White, who will link up with Stanway at Manchester City having joined the club last month, also scored the opening goal against Japan in England's final group game of the 2011 World Cup, which they won before losing to France in the last eight.

Rachel Daly impressed despite starting in an unfamiliar role on the right wing in place of Nikita Parris.

While she is unlikely to replace the now Lyon forward in England's last-16 game, she was full of running and complemented Lucy Bronze on England's right-hand side.

White's second came after Stanway's replacement, Karen Carney, slipped the ball through for the forward's third goal of the tournament.

It proved how important the 30-year-old will be as England aim to go one better than their third-place finish four years ago. 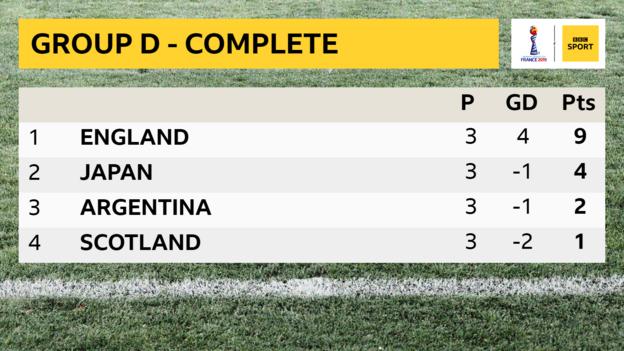 In the first half, England impressed on the counter-attack and in the final third, but they still showed signs of struggling to play their way out from the back at times, and also yielded possession too easily after the break.

Neville has warned of playing 'stand-still football' before, and it almost cost them early on after Keira Wash gave the ball away, allowing Yokoyama to shoot over.

The Japanese forward was more accurate after eight minutes when her 35-yard free-kick was superbly tipped onto the bar by Bardsley, who returned to the side after missing out against Argentina.

Japan, who lost 3-0 to England in the SheBelieves Cup in March, were often more inventive in midfield, but lacked the cutting edge that England offered.

Substitute Yuika Sugasawa twice came closest to an equaliser, firstly when she stretched to meet a left-wing cross but poked inches wide with Bardsley struggling to cover.

Bardsley then made a superb last-ditch save to deny Sugasawa once more.

Although England will need to tighten up in midfield, and have plenty to work on, in White and Bardsley they at least have two players at the most important ends of the pitch on top form.

'A few players got a little tired'

England manager Phil Neville on BBC Radio 5 Live: "The objective before the game was to win the game, get the three wins and top the group - we've done that.

"We needed this game I think to have a different test and we got that. Some of our play in the first half was fantastic, but in the second half a few of the players that maybe hadn't played as much got a little bit tired. But it's job done and we're looking forward to the last 16.

"We don't need to do much work [on our sloppy passing] we just need to take care with our simple passes and need to keep it tight. My experienced players Stephanie Houghton, Lucy Bronze and Karen Bardsley did well and Ellen White is banging them in so it's a happy house.

"[White and Jodie Taylor] have scored four goals between them in three games. I love it when my centre-forwards are scoring goals."

Japan coach Asako Takakura: "England are a very good team, very powerful. Their attack was very quick and we were trying to respond to that. We conceded a goal in the first half because of an error, and then we backed off a little because of that.

"But in the second half we did manage to gain our composure but unfortunately we couldn't score. Then, again, England scored. We managed to get through to the knockout stage and the things we should do have been defined in our past matches."