Jamaica coach Hue Menzies said he would "pay to watch" Sam Kerr after she scored all her team's goals in a 4-1 win against his side to send Australia into the Women's World Cup last 16.

The forward's feat means she is the tournament's joint-top scorer with five goals alongside USA's Alex Morgan.

"I like her attitude, especially in the box. You cant teach that," he said.

Menzies added: "I told her after the match that it's good to sit back and watch her play - I'd pay to watch her."

Kerr and Australia were excellent but Menzies' side had the backing of the crowd and leave France following their best display of the tournament.

The spirited Reggae Girlz went behind in the 11th minute when the Chicago Red Stars forward converted Emily Gielnik's delivery and then produced another good finish from Katrina Gorry's ball.

Jamaica had, by that point, conceded 10 goals in three games without reply, but that statistic changed four minutes after the restart.

Forward Khadija Shaw, who played in a deeper midfield role, was key to her team's improvement after the break. She provided the threaded pass for Solaun, who took the ball around the Australia keeper Lydia Williams and fired in between two defenders.

Shaw had two good chances to test Williams herself but fired wide before Kerr all but ensured Australia of victory when she fired in after the ball bounced off the thigh of Sashana Campbell.

And Kerr drew level with Morgan when she tapped in after goalkeeper Nicole McClure kicked air in attempting to clear from a backpass.

Australia finish Group C in second spot, behind Italy and ahead of Brazil - all on six points. The Matildas now face Norway in Nice on Saturday. 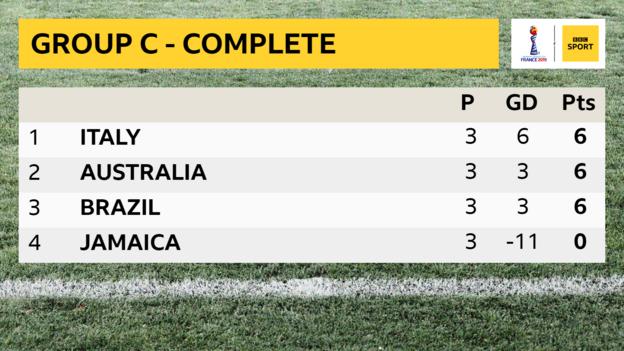 'I was frustrated with myself'

Jamaica coach Hue Menzies: "We didn't execute the way we wanted to, but we showed how resilient the group is. We will go back to the Jamaica football federation and say we need to have these type of quality games before the World Cup.

"We took this project not because of football but to change mindset of how we perceive women. The thing is we leave this programme in a better situation. We will need to discuss with the federation about better preparations before a World Cup."

Australia goalscorer Sam Kerr: "We weren't as happy with how we started, but we knew we could come back. We're really happy - any time I score it's my job.

"I think we need to be better for longer. At moments we lapsed and I was frustrated with myself.

"I was proud of the girls [when we were under pressure]. Jamaica were trying to get us on the counter."

On facing Norway in the last 16: "We've always believed in ourselves. We don't care who we play - it's nice to go to Nice and see another part of France."