The 'Big Six' of the Premier League - Arsenal, Chelsea, Liverpool, Manchester City, Manchester United and Tottenham - have claimed the top six as their own for the past three seasons.

But with some of those sides facing problems and the clubs below them looking threatening, could their dominance come to an end in 2019-20?

Manchester City and Liverpool are expected to remain a cut above the rest, but which clubs have a realistic chance of breaking the established order at the top of the Premier League, which ones are vulnerable - and why?

The club that not only broke the Big Six but smashed it to smithereens three years ago, Leicester have arguably the most exciting young squad in the Premier League.

Eight of Brendan Rodgers' first XI since he took charge are aged 26 or younger and are yet to reach their peak, including midfielder Youri Tielemans, who joined for a record £40m fee this summer. Ayoze Perez, Newcastle's top scorer last season who joined the Foxes for £30m, turned 26 last week. 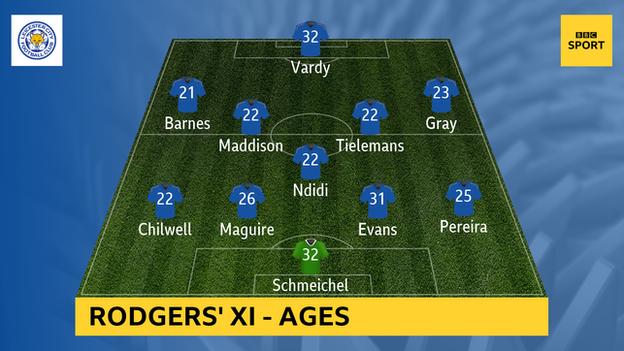 While there's no guarantee that such potential will be realised, it shows how promising this group of players is that the Champions League clubs look so enviously at them, with Ben Chilwell, Harry Maguire, Wilfred Ndidi and James Maddison all linked with moves to clubs above them this summer.

In the 10 games following Rodgers' appointment, Leicester took more points and had a better expected goal difference - the goals they were expected to score given their chances, minus those they were expected to concede - than Manchester United, Tottenham and Arsenal, emphasising their top-six credentials.

After finishing seventh last season, it would be fair to think that for Wolves to finish any higher, they need to start taking points off the Big Six themselves.

But Wolves were actually very successful against the teams above them in 2018-19, with only Manchester City and Liverpool having a better record. It is their record against the teams below them that they need to improve to challenge for the top six.

Wolves were the Robin Hood of the Premier League last season, taking points off the rich and giving points to the poor. If they can maintain their success against the big sides and learn how to bully the others, then a place in the top six could be within reach.

However, one thing that could hinder an assault on the top of the table is a long run in Europe. In the past 10 seasons, the only non-Big Six side to qualify for Europe through the league and finish higher the following season was Southampton in 2015-16, whose European campaign ended in August.

Everton: Has Silva stumbled on success?

After a generally underwhelming campaign up to that point, the final eight games of last season saw Everton beat Chelsea, Arsenal and Manchester United and take more points than any side outside the top two.

And as the chart below shows, their impressive results weren't down to enjoying the rub of the green but to an overall improvement in their performances, with their expected goals difference improving alongside their actual one.

As a result, it's not surprising that Marco Silva decided to turn midfielder Andre Gomes' loan into a permanent deal, although he has not been able to do the same with centre-back Kurt Zouma. Idrissa Gueye's move to Paris St-Germain also leaves big boots to fill in midfield, despite the club's signing of Fabian Delph.

Has Silva finally got his team playing the way he wants? With a small number of games, it's hard to say, but if Everton can carry their late-season form into this one, then an exciting season could be on the cards.

Although Arsenal finished higher than in their final season under Arsene Wenger, the club has a fair few problems to address.

Even the most basic statistics are damning for the Gunners, as last season they became the first top-six side to concede more shots than they took themselves since Alan Pardew's Newcastle in 2011-12.

While Arsenal did score the most goals outside the top two, partly through creating the highest-quality chances in the Premier League, it's unlikely the club's attackers will be able to do so much with so little for a second season in a row.

And after conceding 51 Premier League goals in each of the past two seasons - Wenger was criticised for failing to organise the defence well enough towards the end of his reign but Emery did no better last season in that regard - the defence needs considerable work.

They have, however, spent £27m on promising teenage centre-back William Saliba, but he does not join the club until next summer.

As the third-best team last season both in terms of points and expected goals, it seems strange to consider Chelsea's position in the top six potentially under threat.

But with the talismanic Eden Hazard gone, transfers banned and inexperienced club legend Frank Lampard appointed as manager, these are strange times at Stamford Bridge.

With 16 goals and 15 assists, Hazard was involved in almost half of Chelsea's 63 Premier League goals last season. But as the table below shows, the loss of a key player does not have to spell disaster for a top Premier League club.

However, while Arsenal offset the loss of Robin van Persie by signing Santi Cazorla, Lukas Podolski and Olivier Giroud and Leeds replaced Jimmy Floyd Hassebaink's goals with those of Michael Bridges, Chelsea cannot do that because of their transfer ban, although the signing of 20-year-old Christian Pulisic in January could help fill some of the huge void left by Hazard's departure.

But as the chart below shows, the side were neither as incredible as they looked in the first run of games nor as dreadful in the second and, by the conclusion of the season, ended up around where their performances deserved.

The good news for Manchester United fans is that, looking at his tenure as a whole, only the top two took more points after Solskjaer took over and only the top three had a better expected goal difference.

Although the club did finish in the top four, Tottenham's form in the final third of last season is likely to give Mauricio Pochettino cause for concern, as only the bottom four sides took fewer points in the Premier League after Valentine's Day. 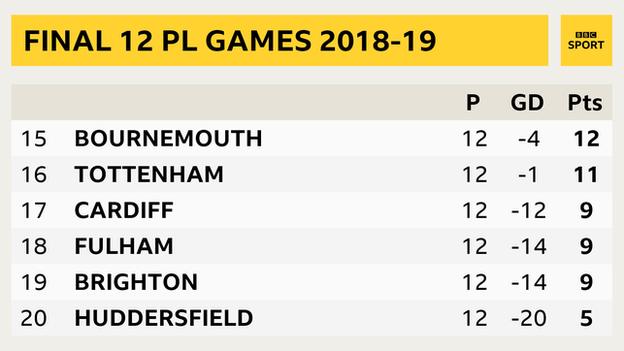 While such form can perhaps be explained away as the result of their incredible Champions League run, it meant Tottenham scored the fewest goals and conceded the most goals in a season since Pochettino's first in 2014-15.

By finishing in the top four in each of the past four seasons, Tottenham have shown a consistency that makes falling out of the top six unlikely, but last season's league showing was a decline on the campaign before.