Both sides created plenty of chances, with Legia coming alive in the second half after Rangers dominated early on.

Despite failing to score an away goal, Rangers will be content with the result.

Steven Gerrard's side have won all their home games this season, and now have the return leg at Ibrox to try and clinch a place in the group stage for a second consecutive season.

There was a sense before kick-off at the Polish Army Stadium that this was the defence of Legia versus the attack of Rangers. The hosts had kept five clean sheets in a row, while Rangers have scored 30 goals in nine competitive outings so far this season.

Steven Gerrard said pre-match he expected the tie to "go to the wire", and that looks to be an accurate analysis on the this evidence.

What will impress the Rangers boss was the way his team showed admirable composure on the ball in a hostile atmosphere. Joe Aribo, Steven Davis and Ryan Jack had the measure of their opposite numbers in the middle of the park and combined neatly to try and tease the hosts out of their deep defensive shape.

But Legia's miserly defence proved tough to slice through, and at times the visitors were too ponderous going forward.

As if taking confidence from keeping Rangers at bay, Legia came to life in the second half and created a number of good chances. Brazilian winger Luquinhas was at the heart of their resurgence, causing havoc down the left with his direct running and trickery, as he exposed the attacking instincts of James Tavernier.

McGregor had to react smartly to deny him before the break, then he squandered a one-on-one in the second. And Gvilia volleyed over a golden chance shortly after as Luquinhas raced into Tavernier's vacant channel to tee him up. 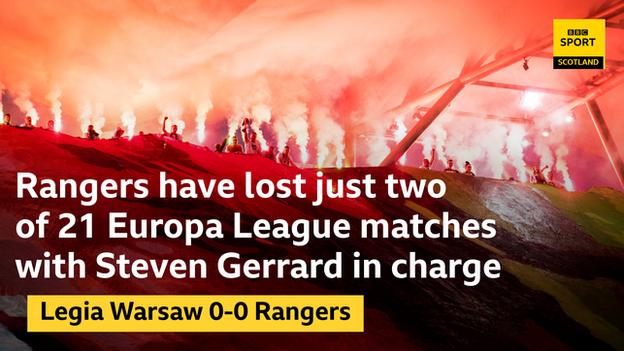 It was then Jon Flanagan's turn to be left scrambling as Andre Martins ghosted into the gap between him and Nikola Katic and stung the palms of McGregor.

Despite being on the back foot in the second period, Rangers did have plenty of opportunities to steal a priceless away goal.

Morelos should have lifted the ball over Majecki when played through superbly by Scott Arfield, and before the break the Columbian hesitated when the obvious pass was to slide in Sheyi Ojo. Arbio and Katic both might have done better with other opportunities as well.

While Gerrard will probably be concerned with the way his team were exposed in the wide areas, it was a solid performance away from home against an impressive opponent. And, given Rangers' home record, they will feel confident of getting the job done next week at Ibrox.

Man of the match - Ryan Jack

As usual Jack was not the player directly creating chances or threatening in the box, but his performances for Rangers only seem to get better. Not only was he a rock at the base of the midfield three, but his ability to move smartly to take the ball in tight spaces and set the attacking tempo with quick, incisive passes is invaluable.

It gave Rangers the upper hand in the midfield battle and ensured they dominated the ball in one of European football's most intimidating atmospheres. The 27-year-old will be a key part of any success the Ibrox club have this season.