A little after 10pm, there's not one set of footsteps to be heard on the pavements of Donetsk.

It's an hour before the nightly military curfew starts but no-one's taking any chances and the city is already slipping into a state of quiet. It won't stir again till 4am tomorrow, once the curfew is lifted.

Donetsk is a city that once bristled with promise. Situated in the east of Ukraine close to Russia's borders, it is now a key location in a bitter conflict that shows little sign of easing.

About 13,000 people have been killed, and the United Nations estimates at least 1.3 million have fled their homes. Many of those who remain in Donetsk appear weakened by years of isolation and its football team - the heart of the city's social life - has fled.

Shakhtar Donetsk, champions of Ukraine, one of the 20 best teams in Europe according to Uefa, last played here in May 2014.

The fighting had begun in April, when heavily armed pro-Russian separatists seized large areas of territory in Ukraine's Donbas region, including Donetsk. The self-proclaimed Donetsk People's Republic (DPR) was established.

The Ukrainian government accuses Russia of arming the separatists in the east, and also of sending troops to the region. Moscow denies this, but admits that Russian "volunteers" are fighting for the rebels.

Shakhtar's glorious 50,000-capacity Donbas Arena was the setting for a 3-1 win against Illichivets Mariupol that secured a fifth straight league title. Barely 18,000 turned up as the city braced for war. Two days later, the DPR flag was raised - illegally - over the police headquarters. Ukrainian forces retaliated with shelling. One month earlier, Russia had annexed Ukraine's Crimean peninsula in the south.

The Donbas Arena hosted the Euro 2012 semi-final. World champions Spain beat Portugal on penalties in front of a capacity crowd and the hundreds of millions watching on TV. There's no football played here now. The only sign of its former life is a sign reading 'keep off the grass'.

The stadium has been badly damaged twice - once when a shell crashed into the arena, starting a fire, and again when a Ukrainian rocket landed nearby. The shockwaves shook part of the roof off. It's had rudimentary repairs, but there's a long way to go before the place can be considered safe.

When Shakhtar meet Manchester City again in the Champions League this year, it won't be here but in Kharkiv, 100 miles to the west.

"It was pretty costly to repair the roof after the blast pulled it off," says Victoria, a stadium guide. Once, there would have been an army of guides employed to show visitors round. Victoria adds: "The job needs finishing and that takes money the DPR don't have."

Stepping down the players' tunnel, we tread the concrete corridors where mountains of food and medical supplies had been stored until 2017, transported in lorries from Ukraine as part of Shakhtar owner Rinat Akhmetov's 'Let's Help' aid drive. But you'll hear little gratitude for the oligarch's charity here.

Shakhtar were forced to leave by the security situation when separatists took control of the city. They cannot go back. To do so would be to give implicit recognition to the rebels and, besides, it would be impossible for visiting teams to cross the militarised line of contact between DPR and Ukrainian fighters.

"His money and influence could have helped the city," he adds. "What he did for the city means nothing now."

Nikolai Tarapat, the DPR's sports minister, says: "It's up to Mr Akhmetov. We can't comment on his decisions. For whatever business reasons he chose to sacrifice Donetsk and move the club away. Who knows? Maybe in the future, Shakhtar could become the key to peace." 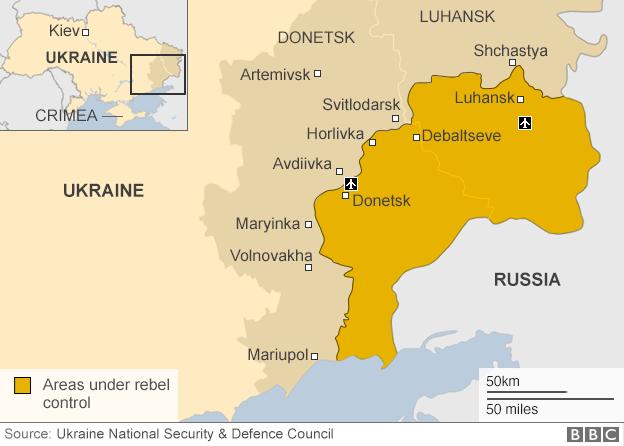 Even if they have left their home city, there is no way for Shakhtar to avoid the conflict altogether.

In 2017, a Ukrainian nationalist organisation issued T-shirts to all teams in Ukraine's Premier League bearing supportive slogans for war veterans to be worn before kick-off. Seventeen of the 18 teams wore them. The one exception was Shakhtar.

The veterans' organisation blamed the Football Federation of Ukraine for intervening on Shakhtar's behalf, accusing it, somewhat dramatically, of "drinking the blood of simple Ukrainian patriots". There had been a previous incident in 2014 when the team were asked to wear shirts proclaiming 'Glory to the Ukrainian Army' before a game against Karpaty Lviv. Shakhtar refused.

Ex-Shakhtar defender Yaroslav Rakitskiy, a Donbas native, faced repeated questioning in the press about his refusal to sing the national anthem when he played for Ukraine. He left the club in January for Russian champions Zenit St Petersburg, although his picture is still plastered on the outside of the Donbas Arena.

Rakitskiy, 30, has been derided as a traitor over the transfer. Zenit are sponsored by the Russian state-owned energy giant Gazprom, which has been cutting off gas supplies to Ukraine since the conflict began.

The move caused irreparable damage to Rakitskiy's reputation, with 57% of supporters polled by the Kyiv news site Tribune in 2019 saying they believe he should never play for the national team again. He has not been picked since being sold.

Shakhtar moved to the Donbas Arena in 2009, swapping the crumbling 1930s terraces over at Shcherbakov Park for a glistening new ground. "The decision to leave us was Shakhtar's, but we can't get upset," says Antipov. "We have to look to our future."

The region's professionals have been forced to leave but amateur football is still being played here. A 10-team championship runs during the summer months. The 2018 champions Gvardeets (the Guardsmen) play their games here in Donetsk. They lead the division again at the halfway stage of the season.

Their matches are played at the Donetsk Olympic Stadium, where as recently as 2008 Shakhtar played against Barcelona, AC Milan and Roma in the Champions League in front of 25,000 fans. The amateur league games draw tiny attendances, with most matches gathering only a few hundred spectators.

As for Shakhtar themselves, home now is the Metalist Stadium in Kharkiv. Previously, they pitched up in the western city of Lviv, a hotbed of Ukrainian nationalism, where they were hated on account of Donbas' affinity to Russia.

"Our aim is to help them feel at home while not forgetting that they are guests," says Anton Ivanov, club director of Shakhtar's new landlords, FC Metalist.

"Nobody feels like Shakhtar are a refugee team. This war came into all our lives very suddenly, but we are still one nation. There are about 200,000 refugees in Kharkiv from Donbas. They are Kharkiv citizens now. We're happy to have Shakhtar because they bring the Champions League here."

Shakhtar emerged from the shadow of the historically far more successful Dynamo Kyiv to rule Ukrainian football, which has changed dramatically in the past 30 years. In Soviet times, the Communist Party used to force Ukraine's best players to join Dynamo.

Things are very different now. Since 2002, Shakhtar have won 12 league titles and have become regulars in the Champions League. Such success is largely down to billionaire owner Akhmetov, who inherited the club when its previous president was killed in a bomb attack at the stadium in Shcherbakov Park in 1995. Since then, he has ploughed millions of dollars into the club, with the aim of displacing Dynamo at the top.

In 2002, Shakhtar appointed its first foreign coach - former Inter Milan player Nevio Scala. Within six months, they won their first Ukrainian title. "Scala brought something the club hadn't had before," says ex-Shakhtar and Ukraine captain Igor Petrov. "It taught the team that they could beat Dynamo Kyiv. Of course, it helped that the president was getting richer all the time."

The appointment of a second foreign coach - Romanian Mircea Lucescu, in 2004 - was another turning point. "Lucescu was the one who started bringing in young Brazilians and developing them to sell," says Petrov.

With Ukraine struggling to develop its own young players, Shakhtar instead began building a network of agents and scouts in South America. Beginning with winger Jadson, whose goal against Werder Bremen in 2009 clinched victory in the Uefa Cup, through to forward Douglas Costa, who shattered the Ukrainian transfer record when he was sold to Bayern Munich for €30m in 2015, Shakhtar have become a shop window for Brazilian stars coming to Europe. Chelsea's Willian also passed through Donbas, as did Manchester City's Fernandinho.

"Whoever was talented locally left for other countries," says Petrov of an exodus after the Soviet Union collapsed in 1991. "By the time of 2005, there was no new generation coming through in Russia or Ukraine, so we made the choice to look at Brazil. When we look back, there was no other option."

Despite the influx of foreigners, central to the club's new identity was its place in a long-standing divide between the majority Russian-speaking east and the rest of Ukraine.

"The rivalry with Dynamo really began when Shakhtar started beating them in 2004," says Sharafudinov. "Imagine it. You had 30,000 fans travelling from Donetsk to Kyiv when the teams played. The capital was taken over by Shakhtar's colours of orange and black. Suddenly the attitude of the media was changing. That's when politics really started coming into the picture."

When Shakhtar held a victory parade in 2009 to celebrate winning the Uefa Cup - the final edition before it became the Europa League - Viktor Yanukovych was the star attraction.

A former governor of the Donetsk region, Yanukovych's closest political ties and support were always with the mainly Russian-speaking eastern and southern parts of Ukraine. It helped him win the presidential vote in 2004, and many in those areas felt betrayed when, after huge protests in Kiev that became known as the Orange Revolution, the election was declared fraudulent and he was ousted from power.

His address to Shakhtar's clamouring supporters on that day in 2009 was symbolic - although not in ways anybody might have expected then. He had rebuilt his political standing and was once again close to rule. "Shakhtar has become a symbol of Ukraine," he said. "I believe that this win opens the way to the unification of Ukraine."

Yanukovych was again elected president in 2010 - legitimately this time - but a protest against his decision to abandon a European Union partnership deal in November 2013 morphed into a huge - and extremely violent - campaign to push him from power.

Shakhtar now seems like a different symbol of Ukraine - a country far from united.

The country's government curates a website listing those it accuses of terrorism by dint of association with separatist rebels in the east. It includes a clutch of names who were once highly regarded in Ukraine, people like the ex-Shakhtar captain Zvyaginstev. We meet in his cramped office, glistening with Soviet-era souvenirs, at the Donetsk city football administration where he works as local chair.

"Football unites all the people of Donetsk," he says through a haze of cigarette smoke. "It's not a dream. I believe that in my life, we will see football at the Donbas Arena again. Old Shakhtar from the Soviet times, that is what is in my mind. Just like Bobby Charlton will never forget his days at Manchester United.

"But I regret what's happened. It was all out of our hands. We lived in peace. Look at us now."