Barcelona are preparing a new contract for forward Lionel Messi that will keep the 32-year-old Argentina international at the Nou Camp for the rest of his career. (Mundo Deportivo - in Spanish)

Liverpool and Netherlands defender Virgil van Dijk, 28, is bemused by talk he is to be offered a new £200,000-per-weekdeal at Anfield. (Liverpool Echo)

Manchester United and Manchester City are set to compete for the signing of 20-year-old Benfica and Portugal Under-20 midfielder Florentino Luis. (Star)

France midfielder Paul Pogba, 27, stayed at Manchester United instead of moving to Real Madrid because of a £150m sports sponsorship deal. (Sun)

Why young England players deserve to shine in Euro qualifiers...

Lazio midfielder Sergej Milinkovic-Savic, 24, is on the verge of signing a new contract, despite interest in the Serbia international from Manchester United, Paris St-Germain and Juventus. (Mail)

Manchester United's 29-year-old Argentina defender Marcos Rojo, who was linked with a move away from Old Trafford in the summer, will push for a transfer to Aston Villa in January. (Birmingham Live)

Kelechi Nwakali, the 21-year-old Nigerian midfielder who moved to Spanish second division side Huesca from Arsenal in the summer, wants to go back to Emirates Stadium in future. (Score Nigeria)

Left-back Danny Rose, 29, wants to stay and fight for his place at Tottenham Hotspur despite interest from other clubs and the arrival of fellow Englishman Ryan Sessegnon, 19, from Fulham over the summer. (Mirror)

Leeds United are close to securing a five-year extension to 23-year-old English midfielder Kalvin Phillips' contract, after the player was the subject of interest from Aston Villa and Burnley in the summer. (Telegraph)

Bayern Munich and Germany goalkeeper Manuel Neuer, 33, has no plans to retire. (Mirror) 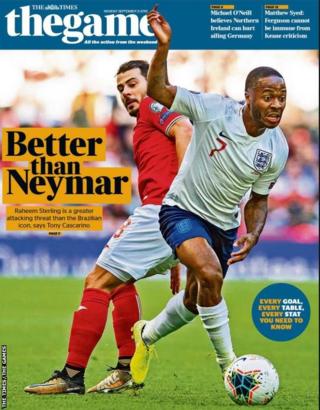 Monday's The Times/ The Game back page

Read more on Premier League restart date to be moved