With the Hornets managing 31 shots at goal in 90 minutes, and 23 of them coming after the break, statistically it was the worst defensive display by the Gunners since Opta's records began in 2003.

Watching them in the MOTD2 production office, it certainly felt that way.

From having their opponents by the throat when they were 2-0 up, Arsenal inexplicably handed Watford a way back into the game in the most naive way when they conceded after trying to play out of their own area from a goal-kick.

But what made things worse was that Unai Emery's team could not react when things went wrong for them. Instead, they disintegrated.

Their game-plan simply disappeared. They were fortunate only to concede one more goal - from a penalty after another silly foul by David Luiz - and were left hanging on for a point against the Premier League's bottom side.

It could easily have been a lot worse.

As a team, Arsenal's collective brain deserted them in the second half. As individuals I was looking at them in horror, thinking how are they conceding so much space, and wondering exactly who was picking up who in the box.

There seemed to be a fear that gripped their players, something their experienced Swiss midfielder Granit Xhaka admitted afterwards.

We could all see it too, and it is really worrying for Emery. I think the second half was probably the hardest 45 minutes he has had since he took the Arsenal job in the summer of 2018.

Emery now knows he has got to restore confidence in the hearts and minds of his players, and also put together a plan.

He has got to work through what Arsenal are doing wrong, and also work out whether they are good enough to play the way he wants them to play - because it is like watching schoolboys sometimes when they try to bring the ball out from the back.

'Don't play short, just because you can'

Arsenal had already had a warning in the first half, when they tried to play out from a goal-kick and Matteo Guendouzi was caught in possession.

They did not learn from their mistake. Instead they repeated it, and eventually handed Watford a route back into the game.

Yes, there was a suspicion that Gerard Deulofeu was in the box when he intercepted Sokratis Papastathopoulos's clearance to set up Tom Cleverley to make it 2-1, but it was a totally unnecessary decision by Arsenal to play that way in the first place.

I was a player when the laws have changed in a way that affected defenders - like when goalkeepers were stopped from picking up back-passes in 1992.

There was no choice then, you had to change the way you played, and the way the whole team played too.

But in this situation, teams do have a choice. You don't have to play short passes inside your own area from goal-kicks, just because now you can.

I think we are in a bit of an experimental stage with it, with some teams doing it when it just doesn't suit them, and others doing it at the wrong times.

The latter was the case for Arsenal on Sunday, when they were architects of their own downfall.

I admire that they are trying to play out of defence but, if they really wanted to do that, there was another pass on for Sokratis - wide to right-back Ainsley Maitland-Niles, which was a much safer way of doing it.

If you do what Arsenal did and get it wrong, then it is comical and you look stupid.

It is crazy football, really, because if you mess up, you are giving your opponent the ball on the edge of your own area - and it ends with you conceding a tap-in.

If Arsenal prepared for this game by practicing passing out from the back, they didn't seem to get to the next stage, which would have been 'what happens if we lose it?'

When Watford pulled a goal back, there were no answers from the Gunners. They had no way of seeing the game out.

They tore up their previous tactic, which was to pass the ball, and seemed to change their thinking to 'let's just go long'.

But when you do that, you have to do it as a team, and move up the pitch.

You might try to target one side, so you have the numbers to get the knockdowns, hold the ball up there and squeeze the opposition in that area.

However, Arsenal did not adapt their shape to do that in any organised fashion.

Instead they just played aimless balls to isolated strikers, and everyone else stayed rooted to the spot in deep positions, still on the edge of their own box.

Each part of their team was strung out and completely disconnected, which meant they could not keep possession - it dropped from 57% in the first half to 37% after the break.

Things got so bad for Arsenal, it was almost like watching a training session, with Watford attacks coming one after another. It was relentless.

When that is happening to your team, as a player you want to take control. You make yourself more compact as a unit, and stay in contact with each other.

Arsenal's game management was non-existent, however. If you were in their defence, you needed binoculars to see their front players, they were that far away.

'Alarm bells must be ringing for Emery' 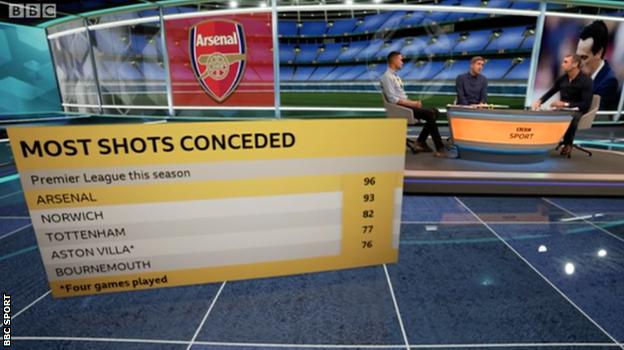 This is all pretty basic stuff, and a lot of the time, if you are keeping the right space between, say, defence and midfield then it goes unseen.

When it doesn't, you concede chances at the rate Arsenal were in the second half.

Alarm bells must be ringing for Emery, and he needs to get on the training ground and sort things out.

Without Pierre-Emerick Aubameyang on the pitch, Watford would have won - and they certainly deserved to.

Arsenal have already suffered 20 away Premier League defeats in just over two seasons, which is simply not good enough for a team that wants to make the top four.

Emery has only been in charge for one of those campaigns, but the worrying thing is his side still have huge issues defensively, and they do not appear to be improving. In fact they seem to be getting worse.