Scotland conceded four goals in 27 second-half minutes in Moscow as their slender hopes of automatic Euro 2020 qualification were finally extinguished by a dominant Russia.

Steve Clarke's side held out for almost an hour before Artem Dzyuba netted, and the striker took his tally to 23 - the same total as the whole Scotland squad - after Magomed Ozdoev's fierce strike. Aleksandr Golovin made it 4-0 late on.

Scotland took 74 minutes to muster a shot and have now scored three goals - and lost 14 - in Clarke's five games.

They remain fifth in Group I - below Cyprus and Kazakhstan - and can no longer finish in the top two spots to secure a finals berth.

However, they can still qualify for their first major tournament since 1998 via the Euro 2020 play-offs, which begin in March, having earned the chance to progress by winning their Nations League group last year.

Clarke's men host the group's basement side San Marino on Sunday, before ending their forlorn campaign against Cyprus and Kazakhstan next month.

Scotland were lulled into a false sense of security by a passive Russian performance for almost an hour of this match.

There were signs in that period that perhaps the Scots had learned lessons in recent chastening defeats by Russia and Belgium. But it soon became apparent the hosts had been waiting for the moment to up the ante, which they did with a vengeance in 13 second-half minutes.

Dzyuba was their tormentor-in-chief, bullying the hapless Scotland defence and in particular Charlie Mulgrew, who was held off by the bustling striker as he hooked the first goal over his head and beyond David Marshall's outstretched hand from Golovin's corner.

Three minutes later, the game was as good as finished when the ball was worked back to Ozdoev and from around 30 yards he arrowed a powerful drive past the Scotland goalkeeper.

The Russian third - Dzyuba's second - was the Scotland defence at its worst. Mario Fernandes made his way unmarked to the byeline, heading the ball back to the striker, who held off Mulgrew's attempted challenge to knock it nonchalantly into the net. 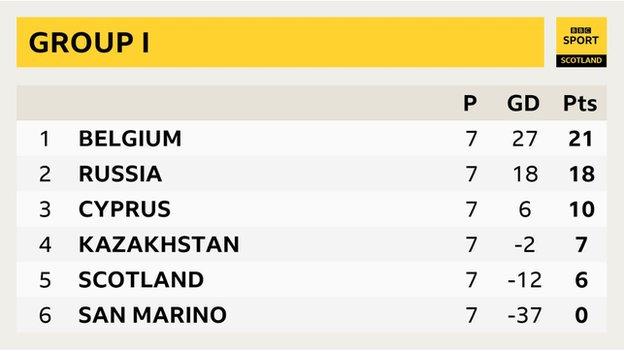 It was a ruthless, almost cruel dissection of what had threatened to look like a half-decent Scotland performance. But any positivity temporarily garnered in a goalless first half was utterly erased when the constant menace of Golovin grabbed a fourth, firing across Marshall and in off a post.

Clarke had pronounced pre-match that he was looking for maximum points from the final four qualifiers, but that looked naive as his team were ripped asunder.

Few quibbled with his appointment and his early run of fixtures has been a thankless one, but it is difficult to overstate the magnitude of the task facing him to turn around the fortunes of a bedraggled squad.

Man of the match - Artem Dzyuba

For sheer creativity, Golovin pushed Dzyuba hard for the accolade, but the striker's two goals just edges him ahead of his team-mate.

The 6ft 5in forward's power and skill are a fearsome combination, particularly against a defence as malleable as the Scots'. He struck the bar with another audacious effort and few would have begrudged him a hat-trick on a night he tormented the life out of the Scotland backline.