Hearts sit just one point off the foot of the Scottish Premiership table after being held by 10-man Livingston.

Craig Levein's side had sustained pressure but could not make it count in the final third at the Tony Macaroni Arena.

Livingston's Aymen Souda was sent off for a high tackle on Hearts captain Christophe Berra on a frustrating day.

The hosts sit in seventh with only goal difference keeping the visitors off second-bottom spot.

No runaway winner this time

The last time these sides met at this venue it finished 5-0 to Livingston, but there was little sign of this match ever being quite so one sided - this was raw, meaty, competitive fare right from the start.

The beautiful game would take a bit of a bruising in the first half but there was no shortage of incident. The best chance of the first half fell to Hearts, Uche Ikpeazu should have given his side the lead one-on-one with the keeper but chose to place his shot rather than smash it and the Livingston keeper Matija Sarkic did superbly to make the save.

Ikpeazu's bad luck continued. A tangle with Alan Lithgow had more than a whiff of penalty about it but referee Greg Aitken waved away the claims.

Ryo Meshino also flashed a shot wide of the post as Hearts edged the first half in terms of chances. But Livingston also carried a real threat.

With Lyndon Dykes injured, Scott Robinson led the Livingston line and almost opened the scoring with a close-range effort from a Nicky Devlin cutback but Pereira in the Hearts goal saved with his leg.

Souda then tried his luck from the edge of the box, but Joel Pereira turned his shot past the post.

But it would all turn sour for Souda in the second half. Pereira made a hash of a high ball into the box and, as he had a second attempt, Souda came flying in on the Hearts keeper and Berra with a scissor kick. It was a crude attempt to say the least and referee Aitken was in no doubt as he flashed the red card.

Chances were becoming less frequent, although Hearts defender Michael Smith had to clear an effort from Jack McMillan off the line.

At the other end, Aaron Hickey flashed a ball across the Livingston goal which took a deflection off Lithgow. The ball narrowly spun past the wrong side of the post.

As the match wore on Hearts began to dominate play as you would expect with the extra man advantage, but it looked like that moment of quality would elude them.

A late turn-and-shot from Ikpeazu was held by Sarkic as the referee blew the final whistle. In the end, a better point for the home side given the red card, but another frustrating day for Hearts. 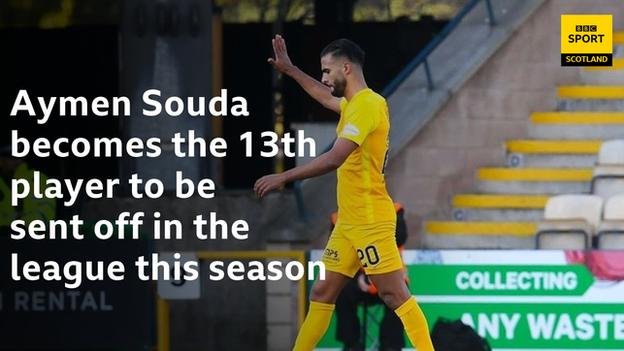 Man of the match - Aaron Hickey

Culpable for the Rangers equaliser last weekend, the youngster bounced back in style here with an assured performance at left back.

Without wanting to heap pressure on this hugely promising left back - and these are very early days in his career - there are more than a few shades of Kieran Tierney about him.

He pushed Hearts forward in the second half continuously as the away side searched for a winner.

'There were quite a few frustrations' - reaction

Livingston Head Coach Gary Holt: "I'm absolutely delighted for the lads. For 40 minutes in the second half to play with 10 men - the character, the drive, the determination.

"We didn't just sit in. We tried to counter, we tried to hit them on the break when we could."

Hearts manager Craig Levein: "There were quite a few frustrations today. I asked the players to come here and compete which we didn't do last season and I was happy with that.

"I thought we competed from the first whistle to the last. When we did get a numerical advantage it took us 10-15 minutes to settle down and actually start to pass the ball."