St Johnstone's winless start to the Scottish Premiership season was finally halted with a dramatic 3-2 victory over Hamilton Academical.

Mickel Miller had the visitors ahead in Perth before a David Wotherspoon double turned the game on its head.

Despite the victory, Saints remain bottom with Accies in eighth spot.

However, with the visit of Hearts looming on Wednesday, St Johnstone now sit just a point behind the struggling Tynecastle side, as well as Hibs and St Mirren.

Until then, they'll just have to rely on their resilience to get themselves out of trouble. And hope Wotherspoon stays in this kind of form.

The former Hibs midfielder was at the heart of everything positive about the home side's display. His teasing crosses provided plenty of ammunition for frontman Stevie May, and when chances were not put away by others, Wotherspoon took matters into his own hands.

Stung by Miller's fine opener for Accies, it was the Saints midfielder who got the home side back on level terms when he burst into the box and refused to take no for an answer. When his first shot was blocked, he forced his second one in via a deflection. It was clearly Wotherspoon's goal, though.

After the break, he simply picked up where he left off in the first.

Not content with cracking a fine effort off Owain Fon William's right-hand post on the hour, Wotherspoon made sure his right foot found a spot just inside the other upright a few minutes later. He had not scored in nearly a year and yet, just like the Perth buses, two came at once in the same match.

And he should have had a hat-trick but wasted the easiest of the chances that fell his way. Drey Wright's cross was perfect. Wotherspoon's volleyed effort from almost under the crossbar was not, and flew wildly over.

Wotherspoon's two goals doubled the Saints' Premiership tally in front of their own fans for the entire season. They could, and should, have had more.

Murray Davidson watched a fine early effort come back off the crossbar, while Wright - and everyone else inside the stadium - watched incredulously as he blasted over an open goal when a little more finesse would easily have found the back of the net.

And, of course, Saints' profligacy nearly cost them their first win of the season, when Davidson's handball in the area literally handed Accies a late lifeline. The penalty was expertly despatched by substitute Davies, as St Johnstone heads slumped.

But this match had an extra twist. St Johnstone refused to accept this would not be their day and with just a couple of minutes to go, 21-year-old substitute Hendry emerged the hero when he rifled high into the top corner.

There was joy and relief in equal measure for manager Wright. He will not care about the quality of what he saw; he will just be thrilled to see a precious three points added to their tally as they strive to get themselves off bottom spot. 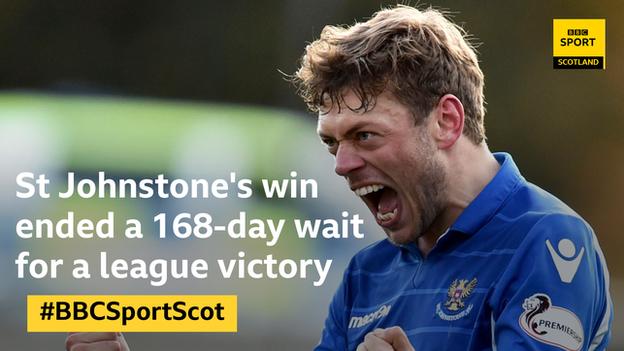 Man of the match - David Wotherspoon

Not a difficult call. He scored twice, should have had a hat-trick, and laid on several chances for his team-mates. It was a super display from David Wotherspoon, fully vindicating his manager's decision to recall him to the side. If he maintains this form, he will not be dropped again.

'It has been a long time coming' - reaction

St Johnstone manager Tommy Wright: "We're just pleased for the players and fans. It has been a long time coming. We showed everything today. Throughout the performance there was a lot of quality.

"And then at the end the team have shown character because with the run that we're in, to concede another soft penalty, you then think 'here we go again' but we kept at it, still played on the front foot and we were really positive all afternoon. It would have been a total injustice because we were so dominant for the whole game."

Hamilton manager Brian Rice: "When we got back to 2-2 we should have seen the game out. We lost three goals and that's very unlike us.

"If you want to come and see five goals it's a great advert for the league but my concern is losing three goals and coming away from home and scoring two goals without taking anything out of the game. That's my big concern today."