Motherwell reclaimed third place in the Scottish Premiership from 10-man Kilmarnock after defeating Angelo Alessio's side 2-1 at Fir Park.

The visitors' Alex Bruce was shown red for slicing down Chris Long, and Liam Donnelly scored from the free-kick.

Dom Thomas equalised for the visitors but Stephen Robinson's side turned the screw in the second-half.

Kilmarnock contained Motherwell for large spells, but the Lanarkshire side have the best goalscoring record in the league outside Rangers and Celtic and made the most of their numerical advantage to bounce back from consecutive defeats.

Makeshift defence made to pay

Defence has defined Kilmarnock this season. Since the shambolic Europa League defeat by Connah's Quay Nomads, the Ayrshire club have rediscovered the miserly streak that had formed the backbone of their success under Steve Clarke.

Under Angelo Alessio, they arrived at Fir Park third in the table with a record of six clean sheets in 10 matches - offsetting the fact only St Mirren had scored fewer goals in the top flight so far this season.

So it was a nightmare start as Bruce was shown a straight red, adjudged to have denied Long a clear goalscoring opportunity by swiping the striker down at the edge of the box. Referee Don Robertson only gets one view, but video footage appeared to show Bruce made contact with the ball before the player. Kilmarnock will appeal against the decision.

From the resultant free kick, Donnelly's low, drilled effort took a deflection and Laurentiu Branescu in the Kilmarnock goal rather fumbled the ball into his own net. But huge credit to Donnelly, the 23-year-old midfielder netting his ninth goal of the season in just 13 appearances.

Suddenly the impressive Kilmarnock central defence was decidedly makeshift - 21 year old Connor Johnson, on loan from Wolves and making his first appearance now alongside captain Gary Dicker, who dropped back from his usual midfield berth.

Motherwell were looking to reclaim third spot in the table and dominated play with the extra man, but Kilmarnock would hit back through a former Fir Park favourite.

Dom Thomas fired a low ball into the box from the right which eluded everyone - including goalkeeper Mark Gillespie - before nestling in the bottom corner. Thomas looked like he could not believe his luck.

Motherwell virtually laid siege to the Kilmarnock defence in the early part of the second half, and they would get their reward when Jake Carroll crossed for Devante Cole to head home.

The hosts continued to have the majority of the play around the Kilmarnock box but the away fans made noisy claims for a penalty, Dicker possibly fouled in the box at a corner but the referee waved play on.

Motherwell continued to press. Substitute James Scott headed over the bar then Long put the ball on a plate for Allan Campbell six yards out, but the midfielder blazed wastefully over the bar.

They were almost made to pay as Eamonn Brophy's fierce shot whistled wide and Mohamed El Makrini headed narrowly past from a corner.

It was the final act in a pulsating match which sees Motherwell move up to third. 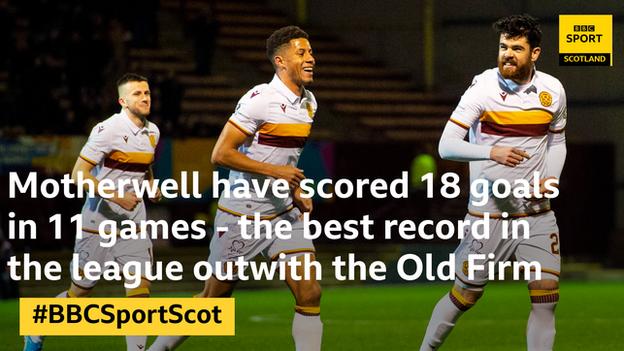 Man of the match - Jake Carroll

Jake Carroll suffered an ankle knock against Rangers but passed a fitness test and made his mark. He was always an option down the wing as an attacking threat, his dead-ball delivery was also a threat.

He provided the assist for Cole from open play and plays with plenty of personality.

'We can still improve' - reaction

Motherwell manager Stephen Robinson: "We had a tough game on Sunday [a 2-1 defeat by Rangers] which took a lot out of the boys. I thought Christopher Long was outstanding, as was Devante Cole.

"The good thing is I still believe we can improve - I'll probably never be happy, to be honest."

Kilmarnock manager Angelo Alessio: "I think it was no free kick and then no sending off. Bruce takes the ball. But the referee gave the free kick and sent him off. I think this is the main point in the game.

"I think the players played well and we do our best to come back into the game and at the end of the game two or three chances to score."